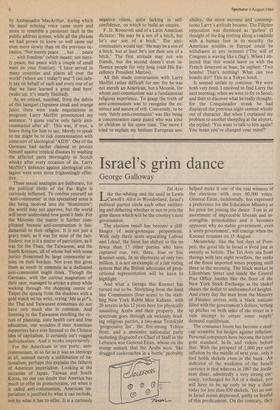 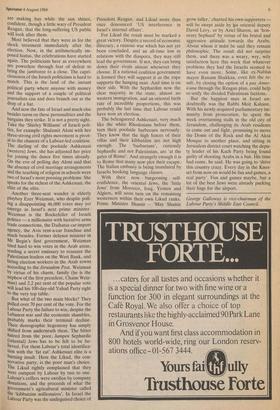 Tel Aviv T ike the whiting and the snail in Lewis LiCarroll's Alice in Wonderland, Israel's political parties circle each other swither- ing and dithering whether or not to join the grim dance which will be the country's next government.

The election result has become a cliff- hanger of near-grotesque proportions. With only three seats separating Labour and Likud, the focus has shifted to the no fewer than 13 other parties who have captured one, two, three, four or five Knesset seats. In an electorate of only two million, it is not an example of a fair voting system that the British advocates of prop- ortional representation will be keen to highlight.

And what a farrago this Knesset has turned out to be. Stretching from the hard line Communists (four seats) to the start- ling New York Rabbi Meir Kahane, with 20 arrests in his 12 years here for physically assaulting Arabs and their property, the spectrum goes through six viciously feud- ing religious parties, a two-man Trotskyist 'progressive list', the five-strong Tehiya front, and a muscular nationalist party including disgraced ex-Chief of Staff in the Lebanon war General Eitan, whose on the stump remark that the Arabs were 'like drugged cockroaches in a bottle' probably helped make it one of the real winners of the elections with over 80,000 votes. General Eitan, incidentally, has expressed a preference for the Education Ministry as his price for joining the dance. Toss in an assortment of impeccable liberals and in- corrigible personalities and it becomes apparent why no stable government, even a 'unity government', will emerge when the Knesset resumes on 15 August.

Meanwhile, like the last days of Pom- peii, the good life in Israel is lived just as sweetly as before. The Tel Aviv sea front throngs with late night revellers, the corks of the finest imported wines popping until three in the morning. The black market in Lilienblum Street and inside the Central Post Office hustles like the floor of the New York Stock Exchange as the shekel chases the dollar to undreamed-of heights. And every day the man from the Ministry of Finance arrives with a black suitcase filled with the government's dollars, setting up pitches on both sides of the street in a vain attempt to create some supply/ demand equilibrium.

The consumer boom has become a mad- cap scramble for hedges against inflation. Personal computers have become the latest gold standard, hi-fis and videos before that. With the prospect of 1,000 per cent inflation by the middle of next year, only a fool holds shekels even in the bank. An indicator of the weakness of the Israeli currency is that whereas in 1967 the Jorda- nian dinar, admittedly a very strong cur- rency, exchanged for 0.6 of a shekel, you will have to be up early to buy a dinar today for less than 850 shekels. Yet no one in Israel seems depressed, guilty or fearful of this predicament. On the contrary, they

are making hay while the sun shines, confident, though a little wary of President Reagan, that the long-suffering US public will look after them.

Most believed that they were in for the shock treatment immediately after the election. Now, in the arithmetically im- posed hiatus, the celebrations have started again. The politicians here as everywhere are powerless through fear of defeat to bring the jamboree to a close. The capri- ciousness of the Israeli politicians is hard to match. This is the land of the instant political party where anyone with money and the support of a couple of political journalists can and does branch out at the drop of a hat.

And now the fate of Israel and much else besides turns on these personalities and the bargains they strike. It is not a pretty sight. Take the 'Shirley Williams' of Israeli poli- tics, for example: Shulamit Aloni with her three-strong civil rights movement is pivot- al to the chances of a Labour-led coalition. The darling of the poolside Ashkenazi (western) Jews, she has adjusted her price for joining the dance five times already. On the eve of polling day Aloni said that the absence of civil marriage arrangements and the teaching of religion in schools were two of Israel's most pressing problems. She speaks for the richest of the Ashkenazi, the elite of the elite.

Another three-seat wonder is elderly Playboy Ezer Weizman, who despite poll- ing a disappointing 46,000 votes may yet emerge as Israel's next prime minister. Weizman is the Rockefeller of Israeli Politics — a millionaire with lucrative arms trade connections, the Daihatsu car import agency, the Avis rent-a-car franchise and much besides. Former defence minister in Mr Begin's first government, Weizman tried hard to win votes in the Arab areas, sending a secret emissary to reassure the Palestinian leaders on the West Bank, and hiring election workers in the Arab towns according to the Jerusalem Post. Weizman by virtue of his charm, family (he is the nephew of the first president, Chaim Weiz- man) and 2.2 per cent of the popular vote Will lead his 100-day-old Yahad Party right to the very top table.

But what of the two main blocks? They Polled over 70 per cent of the vote. For the Labour Party the failure to win, despite the Lebanon war and the economic shambles, Probably marks their terminal decline. Their demographic hegemony has simply shifted from underneath them. The bitter hatred from the poor, lumpen Sephardic (oriental) Jews has to be felt to be be- lieved. For them Labour's total identifica- tion with the 'fat cat' Ashkenazi elite is a burning insult. Here the Likud, the con- servative party, is the poor man's choice. The Likud rightly complained that they Were outspent by Labour by two to one. Labour's coffers were swollen by company donations, and the proceeds of what the government's agricultural minister called the 'kibbutzim millionaires'. In Israel the Labour Party was the undisguised choice of

President Reagan, and Likud more than once denounced `US interference in Israel's internal affairs'.

For Likud the result must be marked a great victory. Despite a record of economic illiteracy, a ruinous war which has not yet been concluded, and an all-time low in relations with the diaspora, they may still lead the government. If not, they can bring down their rivals almost whenever they choose. If a national coalition government is formed they will support it as the rope supports the hanging man. And time is on their side. With the Sephardim now the clear majority in the state, almost no western immigration, and an oriental birth rate of incredible proportions, this was probably the last time that Labour could have won an election.

The beleaguered Ashkenazi, very much like the white Rhodesians before them, turn their poolside barbecues nervously. They know that the high fences of their villas and their kibbutzim are not high enough. The 'barbarians', curiously Sephardic and not Palestinian, are 'at the gates of Rome'. And strangely enough it is to Rome that many now plot their escape., The Italian embassy is being inundated by Israelis booking language classes.

With their now burgeoning self- confidence, the oriental Jews, the 'little Jews' from Morocco, Iraq, Yemen and Algiers, will soon turn on the remaining westerners within their own Likud ranks. Prime Minister Shamir – 'May Shamir

grow taller,' chanted his own supporters — will be swept aside by Ibis oriental deputy David Levy, or by Ariel Sharon, an 'hon- orary Sephard' by virtue of his brutal and aggressive attitude towards the Arabs. About whom it mast be said they remain philosophic. The result did not surprise them, and there was a weary, wry, wily satisfaction here this week that whatever problems they had the Israelis seemed to have even more. Some, like ex-Nablus mayor Bassam Shakkaa, even felt the re- sult, by closing the option of a pax Amer- icana through the Reagan plan, could help re-unify the divided Palestinian factions.

But the happiest man in Israel un- doubtedly was the Rabbi Meir Kahane. With his newly-acquired parliamentary im- munity from prosecution, he spent the week overturning stalls in the old city of Jerusalem, challenging its Arab residents to come out and fight, promising to move the Dome of the Rock and the Al Aksa Mosque to another place, and sitting in Jerusalem district court watching the depu- ty leader of his Kach Party being found guilty of shooting Arabs in a buS. His time had come, he said. He was going to 'drive this country crazy. Every day in the Knes- set from now on would be fun and games, a real party'. Fun and games maybe, but a lot of the best Jews were already packing their bags for the airport.