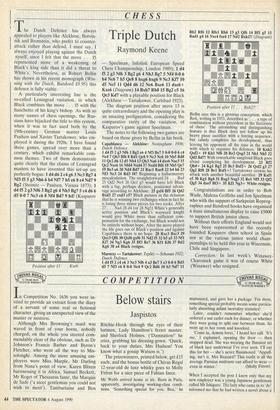 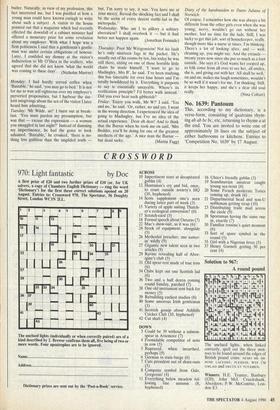 o Competition No. 1636 you were in- vited to provide an extract from the diary of a servant of some real or fictional character, giving an unexpected view of the master or mistress.

Although Mrs Browning's maid was waved in front of your horns, nobody charged; on the whole you steered com- mendably clear of the obvious, such as Dr Johnson's Francis Barber and Byron's Fletcher, who went all the way to Mis- solonghi. Among the more amusing em- ployers were Miss Marple, Mr Darling from Nana's point of view, Karen Blixen baronessing it in Africa, Samuel Beckett, Mr Roget of Thesaurus fame, the Marquis de Sade Ca nicer gentleman you could not wish to meet'), Tamburlaine and Ben

Ritchie-Hook through the eyes of their batmen, Lady Hamilton's ferret master, and Sherlock Holmes. ('Damnation!' he cries, grabbing his dressing-gown. 'Quick, back to your duties, Mrs Hudson! You know what a gossip Watson is.') The prizewinners, printed below, get £15 each, and the bonus bottle of Chivas Regal 12-year-old de luxe whisky goes to Molly Fitton for a nice piece of Fabian farce.

Mr Webb arrived home at six. Been in Paris, apparently, investigating working-class condi- tions. 'Something special for you, Bea,' he

murmured, and gave her a package. For them, something special probably means some particu- larly absorbing infant mortality statistics!

I,,ater, couldn't remember whether she'd ordered a nut cutlet each for dinner, or whether they were going to split one between them. So went up to her room and knocked.

'Come in, demon lover,' I heard her call. 'It's me,' I explained, opening the door — then stopped dead. She was wearing the flimsiest set of black lace underwear I've ever seen. I'll say this for her — she's never flummoxed. 'Appall- ing, isn't it, Mrs Bazzard? This outfit is all the average Parisian midinette can afford to wear —

even in winter.' (Molly Fitton) When I accepted the post I knew only that my new employer was a young Japanese gentleman called Mr Ishiguro. The lady who came in to 'do' informed me that he had written a novel about a butler. Naturally, in view of my profession, this fact interested me, but I was puzzled at how a young man could have known enough to write about such a subject. A visitor to the house pointed out that a magazine which had recently effected the downfall of a cabinet minister had offered a monetary prize for some revelation about my employer. With what I hope was a firm politeness I said that a gentleman's gentle- man was under certain obligations of honour. Later, I confided my dismay at the visitor's indiscretion to Mr O'Shea in the scullery, who agreed that she did not know 'what the world was coming to these days'. (Nicholas Murray)

Monday: I had hardly served coffee when `Bastable,' he said, 'you may go to bed.' It is not for me to wax self-righteous over my employer's perverted propensities, but I harbour the dar- kest misgivings about the sex of the visitor I later heard him admitting.

Tuesday: 'Mr Wilde, sir!' I burst out at break- fast. 'You must pardon my presumption, but was that — excuse the expression — a woman you smuggled in last night?' Instead of damning my impertinence, he had the grace to look ashamed. `Bastable,' he croaked, 'there is no- thing less guiltless than the ungilded truth — but, I'm sorry to say, it was. You have me at your mercy. Reveal the shocking fact and I shall be the scorn of every decent stable-lad in the metropolis.'

Wednesday: Who am I to pillory a solitary aberration? I shall overlook it — but it had better not happen again. (Jonathan Fernside) Thursday: Poor Mr Wittgenstein! Not his fault he's only nineteen fags in the packet. He's usually out of his rooms by ten, but today he was still there, sitting on one of those horrible little chairs he made himself. 'I want to go to Madingley, Mrs B', he said. 'I've been studying this bus timetable for over four hours and I'm totally bewildered by it. Everything it purports to say is essentially unsayable. Where's its verification principle? I'd better walk instead.' Did you ever hear such gibberish?

Friday: 'Enjoy you walk, Mr W?' I said. 'Yes and no,' he said. 'Or, rather, no and yes. I went in the wrong direction. I experienced the idea of going to Madingley, but I've no idea of the actual experience.' Dear oh dear! And to think that the Bursar when he took me on said, 'Mrs Bedder, you'll be doing for one of the greatest intellects of the age.' A nice man the Bursar —

Diary of the handmaiden to Dame Juliana of Norwich:

Of course, I remember how she was always a bit different from the other girls even when she was young; nervy, wouldn't go out without her mother, had no time for the lads. Still, I was lucky to get this job, sort of housekeeper, really. though more like a nurse at times, I'm thinking. There's a lot of looking after, and — well, cleaning up, you might say. And the errands — twenty years now since she put so much as a foot outside. She says it's God wants her cooped up, so folk come from all over to see her, all smiley, she is, and giving out with her 'All shall be well,' on and on; makes me laugh sometimes, wouldn't be so well if it wasn't for me, Fm thinking. Still, it keeps her happy, and she's a dear old soul