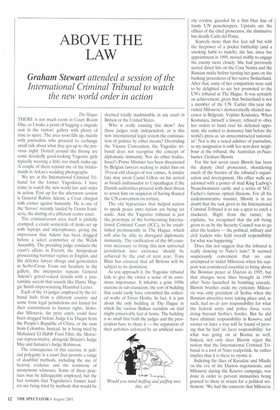 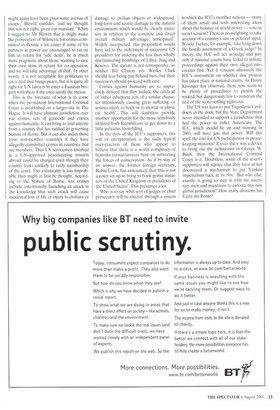 Graham Stewart attended a session of the

The Hague THERE is not much room in Court Room One. so I make a point of bagging a ringside seat in the visitors' gallery with plenty of time to spare. The area soon fills up, mainly with journalists who proceed to exchange small talk about what they got up to the previous night. Dotted around the throng are some decidedly good-looking Yugoslav girls typically wearing a little too much make-up. A couple of them remind me of the bridesmaids in Arkan's wedding photographs.

We are at the International Criminal Tribunal for the former Yugoslavia. I have come to watch the new world law and order in action. First up for the afternoon session is General Rahim Ademi, a Croat charged with crimes against humanity. He is one of the 'heroes' recently lauded by Goran Ivanisevic, the darling of a different centre court.

The criminal-court area itself is pitifully cramped, a crude semicircle of desks set up with laptops and microphones, giving the impression that Ademi has been dragged before a select committee of the Welsh Assembly. The presiding judge conducts the court's affairs in French, the Antipodean prosecuting barrister replies in English, and the defence lawyer shrugs and gesticulates in Serbo-Croat. From our headsets in the gallery, the interpreter repeats General Ademi's gravel-voiced denials with a pantomime accent that sounds like Dame Maggie Smith impersonating Hannibal Lecter.

Each of the 14 judges employed by the tribunal hails from a different country and some from legal jurisdictions not famed for their commitment to human rights. Slobodan Milosevic. the prize catch, could have been dragged before Judge Liu Daqun from the People's Republic of China, or the man from Colombia. Instead, he is being tried by Mohamed El Habib Fassi Fihri, the Moroccan representative, alongside Britain's Judge May and Jamaica's Judge Robinson.

The consequence of this exercise in judicial polygamy is a court that permits a range of doubtful methods, including the use of hearsay evidence and the testimony of anonymous witnesses. Some of these practices may be infrequently employed, but the fact remains that Yugoslavia's former leaders are being tried by methods that would be deemed totally inadmissible in any court in Britain or the United States.

Who is really running this show? Are these judges truly independent, or is this new international legal system the continuation of politics by other means? Overriding the Vienna Convention, the Yugoslav tribunal does not recognise the concept of diplomatic immunity. Nor do other bodies. Israel's Prime Minister has been threatened by Belgian lawyers seeking to indict him on 19-year-old charges of war crimes. A similar fate may await Canni Gillon on his arrival as Israeli ambassador to Copenhagen if the Danish authorities proceed with their threat to arrest him on suspicion of having flouted the UN convention on torture.

The old hypocrisies that helped nation to speak peace unto nation are being set aside. And the Yugoslav tribunal is just the prototype of the forthcoming International Criminal Court (ICC), to be established permanently in The Hague, which will also be able to disregard diplomatic immunity. The ratification of the 60 countries necessary to bring this new universal jurisdiction into existence should be achieved by the end of next year. Tony Blair has ensured that all Britons will be subject to its dominion.

As you approach it, the Yugoslav tribunal fails to give the visitor a sense of its enormous importance. It inhabits a grim 1950s exercise in sub-classicism, the sort of building that could easily have entombed the collected works of Enver Hoxha. In fact, it is just about the only building in The Hague in which the various Balkan socialists on trial might conceivably feel at home. The building is so small that both the judges and the prosecution have to share it — the separation of their activities enforced by an artificial secu rity cordon, guarded by a thin blue line of trusty UN peacekeepers. Upstairs are the offices of the chief prosecutor, the diminutive but deadly Carla del Ponte.

Scarcely more than five feet tall but with the firepower of a pocket battleship (and a smoking habit to match), she has, since her appointment in 1999, moved swiftly to engage the enemy more closely. She had previously scored direct hits on the Cosa Nostra and the Russian mafia before turning her guns on the banking procedures of her native Switzerland. After that, some of her compatriots were said to be delighted to see her promoted to the UN's tribunal at The Hague. It was certainly an achievement, given that Switzerland is not a member of the UN. Earlier this year she visited Milosevic's democratically elected successor in Belgrade, Vojislav Kostunica. When Kostunica, himself a lawyer, refused to obey her orders to hand over his defeated opponent, she rushed to denounce him before the world's press as 'an unreconstructed nationalist'. Nor is she a noted admirer of journalists, so my assignation is with her next-door neighbour at the tribunal, the Australian ex-Nazihunter, Graham Blewitt.

For the last seven years Blewitt has been the deputy chief prosecutor, shouldering much of the burden of the tribunal's organisation and development. His office walls are adorned with a poster of mad King Ludwig's Neuschwanstein castle and a series of M.C. Escher's famous optical illusions. For all his undemonstrative manner, Blewitt is in no doubt that the task given to the International Criminal Tribunal is to use a sprat to catch a mackerel. 'Right from the outset,' he explains, 'we recognised that the job being given to us by the Security Council was to go after the leaders — the political, military and civil leaders who held overall responsibility for what was happening.'

Does this not suggest that the tribunal is really dancing to Nato's tune? It seemed suspiciously convenient that no one attempted to indict Milosevic when his support was considered essential to bring about the Bosnian peace at Dayton in 1995, but that charges were then brought in 1999 after Nato launched its bombing crusade. Blewitt brushes aside my cynicism: Milosevic was only president of Serbia when the Bosnian atrocities were taking place and, as such, had no de jure responsibility for what the federal army and police force were doing beyond Serbia's border. But he did have ultimate responsibility in Kosovo, and sooner or later a way will be found of proving that he had 'de facto responsibility' for what was going on in Bosnia as well. Indeed, not only does Blewitt reject the notion that the International Criminal Tribunal is a tool of Nato realpolitik, he rather implies that it is there to stymie it.

Indicting the likes of Karadzic and Mladic on the eve of the Dayton negotiations, and Milosevic during the Kosovo campaign, was done in order to prevent immunities being granted to them in return for a political settlement. 'We had the concerns that Milosevic might again have been given some avenue of escape,' Blewitt confides, 'and we thought this was not right, given our mandate.' When I suggest to Mr Blewitt that it might make the prosecution of Milosevic for crimes committed in Bosnia a lot easier if some of his partners in power are encouraged to rat on him in return for 'side deals', he is much more pragmatic about those 'wanting to save their own skins in return for co-operation, and we will take advantage of that'. In other words, it is not acceptable for politicians to cut a deal that brings peace, but it is quite all right for UN lawyers to enter a Faustian bargain with them if the ends satisfy the means.

This is the foretaste of what is to come when the permanent International Criminal Court is established on a larger site in The Hague. It will have ultimate jurisdiction over war crimes, acts of genocide and crimes against humanity. It can bring to trial anyone from a country that has ratified its governing Statute of Rome. But it can also indict those from non-member countries if they have allegedly committed crimes in countries that are members. Thus US servicemen involved in a UN-approved peacekeeping mission abroad could be charged even though their country looks unlikely to ratify membership of the court. This eventuality is less improbable than might at first be thought. According to the Statute of Rome, war crimes include 'intentionally launching an attack in the knowledge that such attack will cause incidental loss of life or injury to civilians or damage to civilian objects or widespread, long-term and severe damage to the natural environment which would be clearly excessive in relation to the concrete and direct overall military advantage anticipated'. Widely interpreted, this proposition would have led to the indictment of successive US presidents for ordering the less than wholly discriminating bombings of Libya, Iraq and Kosovo. The statute is not retrospective, so neither Bill Clinton nor Wesley Clark should fear being put behind bars, but their successors should proceed with care.

Crimes against humanity are so imprecisely defined that they include the catch-all of 'other inhumane acts of a similar character intentionally causing great suffering, or serious injury to body or to mental or physical health'. This will doubtless provide another opportunity for the more sensitively inclined Irish Republicans to get down to a little judicious form-filling.

In the eyes of the ICC's supporters, this sort of interpretation is the sadly typical over-reaction of those who appear to believe that there is a world conspiracy of beatniks-turned-lawyers bent on subverting the forces of conservatism. As if by way of an answer, the former foreign secretary, Robin Cook, has announced that 'this is not a court set up to bring to book prime ministers of the United Kingdom or presidents of the United States'. This presumes a lot.

Who is to say what sort of judges or chief prosecutor will be elected through a system in which the ICC's member nations — many of them small and with interesting ideas about the balance of world power — vote in secret session? There is no weighting to take account of a country's size or political input. Would Turkey, for example, take lying down the hostile assessment of a Greek judge? In theory, the ICC will act as judge and jury only if national courts have failed to initiate proceedings against their own alleged miscreants first. Yet it remains ultimately the ICC's assessment on whether due process has taken place in national courts. As Henry Kissinger has observed, there now seem to be plenty of procedures to punish the wicked, but dangerously few to constrain the zeal of the score-settling righteous.

The US was keen to put Yugoslavia's evildoers in the dock, but the State Department never intended to support a jurisdiction that had the power to indict Americans. The ICC, which should be up and running in 2003, will have just that power. Will this spell the end for US participation in peacekeeping missions? If ever there was a device to bring out the isolationist in George W. Bush, then the International Criminal Court is it. Doubtless, some of the court's supporters will rejoice that they have at last discovered a mechanism to put Yankee imperialism back in its box. But who else, exactly, is going to step in with the necessary men and munitions to enforce this new global jurisdiction? How many divisions has Carla del Ponte?