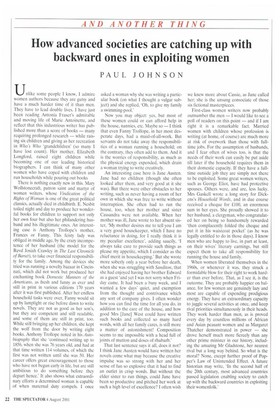 Page 22, 4 August 2001 — How advanced societies are catching up with backward ones in exploiting women
Close

Unlike some people I know, I admire women authors because they are gutsy and have a much harder time of it than men. They have to lead double lives. I have just been reading Antonia Fraser's admirable and moving life of Marie Antoinette, and reflect that this industrious writer has published more than a score of books — many requiring prolonged research — while raising six children and giving as her recreation in Who's Who 'grandchildren' (so many I have lost count). Her mother, Elizabeth Longford, raised eight children while becoming one of our leading historical biographers. I can think of many other women who have coped with children and run households while pouring out books There is nothing exactly new in this. Mary Wollstonecraft, patron saint and martyr of women writers. whose Vindication of the Rights of Woman is one of the great political classics, actually died in childbirth. E. Nesbit toiled night and day to produce her wonderful books for children to support not only her own four but also her philandering husband and his illegitimate ones. An interesting case is Anthony Trollope's mother, Frances or Fanny. This feisty lady was obliged in middle age, by the crazy incompetence of her husband (the model for the Revd Josiah Crawley in The Last Chronicle of Barset), to take over financial responsibility for the family. Among the devices she tried was running a novelty bazaar in Cincinnati, which did not work but produced her enchanting book Domestic Manners of the Amer cans. as fresh and funny as ever and still in print in various editions 170 years after it was first published. After her endless household tasks were over, Fanny would sit up by lamplight or rise before dawn to write novels. They are not as good as her son's, but they are competent and still readable, and some of them are still in print, too. While still bringing up her children, she kept the wolf from the door by writing eight books. Anthony Trollope noted in his Autobiography that she 'continued writing up to 1856, when she was 76 years old, and had at that time written 114 volumes, of which the first was not written until she was 50. Her career offers great encouragement to those who have not begun early in life, but are still ambitious to do something before they depart hence.' It also shows what extraordinary efforts a determined woman is capable of when maternal duty compels. I once

asked a woman why she was writing a particular book (on what I thought a vulgar subject) and she replied, 'Oh, to give my family a swimming-pool.'

Now you may object: yes, but most of these women could or can afford help in the house, nannies, etc. Maybe so — I think that even Fanny Trollope, in her most desperate days, had a maid-of-all-work. But servants do not take away the responsibilities of a woman running a household; on the contrary, they often add to them. And it is the worries of responsibility, as much as the physical energy expended, which drain a woman trying to write creatively.

An interesting case here is Jane Austen. Jane had no children (though she often looked after them, and very good at it she was). But there were other obstacles to her writing, such as never having a room of her own in which she was free to write without interruption. She often had to run the house, too, when her mother and sister Cassandra were not available. When her mother was ill, Jane wrote to her absent sister, 'My mother desires me to tell you I am a very good housekeeper, which I have no reluctance in doing, for I really think it is my peculiar excellence', adding saucily, 'I always take care to provide such things as please my appetite, which I consider as the chief merit in housekeeping.' But she wrote more soberly only a year before her death, when she was struggling with Sanditon, that she had enjoyed having her brother Edward as a guest 'and yet I was not sorry when Friday came. It had been a busy week, and I wanted a few days' quiet, and exemption from the thought and contrivance which any sort of company gives. I often wonder how you can find the time for all you do, in addition to the care of the house, and how good Mrs [Jane] West could have written such books and collected so many hard words, with all her family cares, is still more a matter of astonishment! Composition seems to me impossible with a head full of joints of mutton and doses of rhubarb.'

That last sentence says it all, does it not? I think Jane Austen would have written her novels come what may because the creative impulse was so strong with her and her sense of fun so explosive that it had to find an outlet in crisp words. But without the elder sister to run things, could Jane have been so productive and pitched her work at such a high level of excellence? I often wish

we knew more about Cassie, as Jane called her; she is the unsung consociate of those six fictional masterpieces.

First-class women writers now probably outnumber the men — I would like to see a poll of readers on this point — and if I am right it is a remarkable fact. Married women with children whose profession is writing (at home, of course) are much more at risk of overwork than those with fulltime jobs. For the assumption of husbands, and I fear often of wives too, is that the needs of their work can easily be put aside till later if the household requires them in their domestic capacity. If they have a fulltime outside job they are simply not there to be exploited. Some great women writers, such as George Eliot, have had protective spouses. Others were, and are, less lucky. Mrs Gaskell wrote a long story for Dickens's Household Words, and in due course received a cheque for £100, an enormous sum in her eyes. She proudly showed it to her husband, a clergyman, who congratulated her on being so handsomely rewarded 'then complacently folded the cheque and put it in his waistcoat pocket' (as he was legally entitled to do in those days). I know men who are happy to live, in part at least, on their wives' literary earnings, but still expect them to take all responsibility for running the house and family.

When women liberated themselves in the 1960s, or whenever it was, they struck a formidable blow for their right to work harder than ever before. That, as I see it, is the outcome. They are probably happier on balance, for few women are genuinely lazy and most are capable of expending prodigious energy. They have an extraordinary capacity to juggle several activities at once, and keep rival priorities simultaneously in their heads. They work harder than men, as is proved every day by countless millions of African and Asian peasant women and as Margaret Thatcher demonstrated in power — she drove herself much more fiercely than any other prime minister in our history, including the amazing Mr Gladstone, her nearest rival but a long way behind. So what is the moral? None, except further proof of Popper's Law of Unintended Effect. A future historian may write, 'In the second half of the 20th century, most advanced countries passed legislation enabling society to catch up with the backward countries in exploiting their womenfolk.'