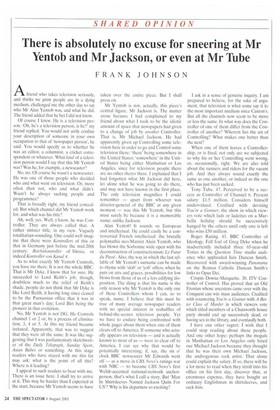 Page 24, 4 August 2001 — There is absolutely no excuse for sneering at Mr Yentob and Mr Jackson, or even at Mr Tube
Close

There is absolutely no excuse for sneering at Mr Yentob and Mr Jackson, or even at Mr Tube

Afriend who takes television seriously, and thinks we print people are in a dying medium, challenged me the other day to say who Mr Alan Yentob was, and what he did. The friend added that he bet I did not know.

No, no. Of course he wasn't a newscaster. He was one of those people who decided who and what went on television. Or, more often than not, who and what didn't. Wasn't he always sacking people and programmes?

That is broadly right, my friend conceded. But which channel did Mr Yentob work for, and what was his title?

Ah, well, yes. Well, y'know, he was Controller. They are always called that. A rather sinister title, in my view. Vaguely totalitarian-sounding. One could well imagine that there were Kontrollers of this or that in Germany just before the mid-20th century: Reichskontroller of Silesia, or indeed Kontroller von Kanal 4.

As to what exactly Mr Yentob Controls, you have me there. It is not the whole BBC. That is Mr Dyke. I know that for sure. He succeeded to Lord Reith's job, though, doubtless much to the relief of Reith's shade, people do not think that Mr Dyke is like Lord Reith, it having long since ceased to be the Parnassian office that it was in that great man's day; Lord Birt being the pioneer in that evolution.

No, Mr Yentob is not DG. He Controls channel I or 2 or, by a process of elimination, 3, 4 or 5. At this my friend became irritated. Apparently, that was to suggest that they were all the same. It was like suggesting that I was parliamentary sketchwriter of the Daily Telegraph, Sunday Sport, Asian Babes or something. At this stage readers who have stayed with me this far may ask: what is the point of all this? Where is it leading?

I appeal to such readers to bear with me. There is an issue here. I shall try to arrive at it. This may be harder than I expected at the start, because Mr Yentob seems to have taken over the entire piece. But I shall press on.

Mr Yentob is not, actually, this piece's central figure. Mr Jackson is. The matter arose because I had complained to my friend about what I took to be the idiotic amount of space that newspapers had given to a change of job by another Controller. That is, Mr Michael Jackson. He had apparently given up Controlling some television here in order to go and Control some television there; 'there' being somewhere in the United States; 'somewhere' in the United States being either Manhattan or Los Angeles, since for television people there are no other thcres there. I explained that I had forgotten what Mr Jackson did here, let alone what he was going to do there, and may not have known in the first place. The only television magnifico I could remember — apart from whoever was director-general of the BBC at any given moment — was this Mr Yentob, but this must surely be because it is a memorable name; unlike Jackson.

Alan Yentob! It sounds so European and intellectual. He could easily be a controversial French intellectual: the brutally polymathie neo-Marxist Alain Yentob, who has blown the Sorbonne wide open with his deconstruction of constructionism: Le Futur du Passe. Also, the way in which the last syllable of Mr Yentob's surname can be made to rhyme with 'slob' or 'yob offers, when he puts on airs and graces, possibilities for low blows from those of us of a less edifying disposition. The thing is that his name is the only reason why Mr Yentob is the only one of these Controllers whom I can, so to speak, name. I believe that this must be true of many average newspaper readers with no special interest in reshuffles of behind-the-scenes television people. Yet we have to endure being confronted with whole pages about them when one of them clears off to America. If someone who actually appears on television — and is actually known to most of us — were to clear off to America, I can see why that would be potentially interesting; if, say, the six o' clock BBC newscaster Mr Edwards went off — as a move in CBS News's ratings war with NBC — to become CBS News's first Welsh-accented national-network anchorperson, that's what I call a story. But 'Man In Shirtsleeves Named Jackson Quits For US'? Why is his departure so exciting? I ask in a sense of genuine inquiry. I am prepared to believe, for the sake of argument, that television is what some say it is: the most important medium since Caxton's. But all the channels now seem to be more or less the same. In what way does the Controller of one of them differ from the Controller of another? Wherein lies the art of Controlling? What makes one better than the next?

When one of them leaves a Controllership, or is fired, not only are we subjected to why his or her Controlling went wrong, or, occasionally, right. We are also told about the runners and riders for the vacant job. And they always sound exactly the same as one another, or indeed as the one who has just been sacked.

Tony Tube. 47. Perceived to be a success as Controller of Channel 6. Present salary: £1.5 million. Considers himself undervalued. Credited with devising You're a Conner, the show in which viewers vote which lads or ladettes on a Marbella holiday should be successively hanged by the others until only one is left who wins £50 million.

Crispin Downe-Marquette. 30, ITV Controller of Control. Has proved that an Old Etonian whose ancestors came over with the Conquest can win mass audiences. Credited with countering You're a Gonner with A Better Class of Murder in which viewers vote which titled members of a Chatsworth house party should end up successively dead, or having sex in the library, and eventually both.

I have one other regret: I wish that I could stop reading about these people. And one other hope: perhaps the moguls in Manhattan or Los Angeles only hired our Michael Jackson because they thought that he was their own Michael Jackson, the androgynous rock artist. That alone could explain the salary. If so, there will be a lot more to read when they stroll into his office on his first day, discover that, at enormous expense, they have bought an ordinary Englishman in shirtsleeves, and sack him.