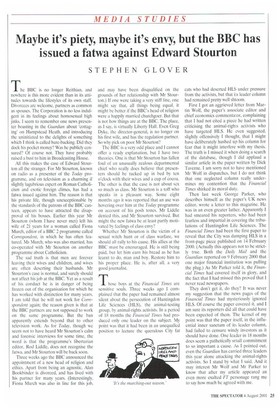 Page 25, 4 August 2001 — Maybe it's piety, maybe it's envy, but the BBC has issued a fatwa against Edward Stourton
Close

Maybe it's piety, maybe it's envy, but the BBC has issued a fatwa against Edward Stourton

The BBC is no longer Reithian, and nowhere is this more evident than in its attitudes towards the lifestyles of its own staff. Divorcees are welcome, partners as common as spouses. The Corporation is no less indulgent in its feelings about homosexual high jinks. I seem to remember one news presenter boasting in the Guardian about 'cottaging. on Hampstead Heath, and introducing the uninitiated to the delights of something which I think is called bare-backing. Did they dock his pocket money? Was he publicly censured? Of course not. They have probably raised a bust to him in Broadcasting House.

All this makes the case of Edward Stourton all the stranger. For Mr Stourton, known on radio as a presenter of the Today programme, and on television as a charming if slightly lugubrious expert on Roman Catholicism and exotic foreign climes, has had a fatwa issued against him. The reason is that his private life, though unexceptionable by the standards of the patrons of the BBC canteen, appears to have attracted the disapproval of his bosses. Earlier this year Mr Stourton (whom I have never met) left his wife of 21 years for a woman called Fiona Murch, editor of a BBC 2 programme called Correspondent, in which he has often featured. Ms Murch, who was also married, has co-operated with Mr Stourton on another programme about Catholicism.

The sad truth is that men are forever leaving their wives and children, and wives are often deserting their husbands. Mr Stourton's case is normal, and surely should not affect his job at the BBC. Yet as a result of his conduct he is in danger of being frozen out of the organisation for which he has worked with distinction for many years. I am told that he will not work for Correspondent again; the reason given is that at the BBC partners are not supposed to work on the same programme. But the ban apparently extends beyond that to other television work. As for Today, though we seem not to have heard Mr Stourton's calm and forensic interviews for some time, the word is that the programme's libertarian editor, Rod Liddle, does not recognise the fatwa. and Mr Stourton will be back soon.

Three weeks ago the BBC announced the appointment of a new head of religion and ethics. Apart from being an agnostic, Alan Bookbinder is divorced, and has lived with his partner for many years. (Interestingly, Fiona Murch was also in line for this job, and may have been disqualified on the grounds of her relationship with Mr Stourton.) If one were taking a very stiff line, one might say that, all things being equal, it might be better if the BBC's head of religion were a happily married churchgoer. But that is not how things are at the BBC. The place, as I say, is virtually Liberty Hall. Even Greg Dyke, the director-general, is no longer on his first wife, and has the regulation partner. So why pick on poor Mr Stourton?

The BBC is a very odd place and I cannot offer a ready explanation, but I have two theories. One is that Mr Stourton has fallen foul of an unusually zealous departmental chief who really does believe that presenters should be tucked up in bed by ten o'clock with their wives and a cup of cocoa. The other is that the case is not about sex so much as class. Mr Stourton is a toff who speaks in a pleasant way. Some eight months ago it was reported that an axe was hovering over him at the Today programme on account of his posh tones. Mr Liddle denied this, and Mr Stourton survived. But might the new fatwa be at least partly motivated by feelings of class envy?

Whether Mr Stourton is the victim of a sexual witch hunt or of class warfare, we should all rally to his cause. His allies at the BBC must be encouraged. He is still being paid, but let him earn his bread as he has learnt to do, man and boy. Restore him to his proper place. He is, after all, a very good journalist.

Those boys at the Financial Times are sensitive souls. Three weeks ago I complained that the paper had remained almost silent about the persecution of Huntingdon Life Sciences (HLS), the animal-testing group, by animal-rights activists. In a period of 18 months the Financial Times had produced only one leader on the subject. My point was that it had been in an unequalled position to lecture the querulous City fat

cats who had deserted HLS under pressure from the activists, but that its leader column had remained pretty well shtoom.

First I got an aggrieved letter from Martin Wolf, the paper's associate editor and chief economics commentator, complaining that I had not cited a piece he had written criticising the animal-rights activists who have targeted HLS. He even suggested, slightly offensively I thought, that I might have deliberately hushed up his column for fear that it might interfere with my thesis. The truth is I missed it when doing a search of the database, though I did applaud a similar article in the paper written by Dick Taverne. I am sorry not to have mentioned Mr Wolf in dispatches, but I do not think that one neglected column really undermines my contention that the Financial Times shirked its moral duty.

Then last week George Parker, who describes himself as the paper's UK news editor, wrote a letter to this magazine. He was in an even greater lather. Apparently I had smeared his reporters, who had been fearless and impartial in covering the tribulations of Huntingdon Life Sciences. The Financial Times had been the first paper to reveal that the City was dumping HLS in a front-page piece published on 14 February 2000. (Actually this appears not to be strictly true. Both the Daily Mail and the Guardian reported on 9 February 2000 that one major financial institution was pulling the plug.) As Mr Parker told it, the Financial Times had covered itself in glory, and the fact that I had missed this proved that I never read newspapers.

They don't get it, do they? It was never my suggestion that the news pages of the Financial Times had mysteriously ignored HLS. Of course the paper covered it, and I am sure its reporters did all that could have been expected of them. The kernel of my point was that the paper itself, in the influential inner sanctum of its leader column, had failed to censure windy investors as it should have done. One leader in 18 months does seem a pathetically small commitment to so important a cause. As I pointed out, even the Guardian has carried three leaders this year alone attacking the animal-rights activists. So I stand by what I said. And it may interest Mr Wolf and Mr Parker to know that after my article appeared an even more exalted FT personage rang me to say how much he agreed with me.