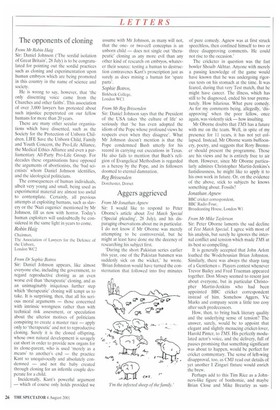 The opponents of cloning

From Mr Robin Haig Sir: Daniel Johnson ('The sordid isolation of Great Britain', 28 July) is to be congratulated for pointing out the sordid practices such as cloning and experimentation upon human embryos which are being promoted in this country in the name of science and society.

He is wrong to say, however, that 'the only dissenting voice came from the Churches and other faiths'. This association of over 3,000 lawyers has protested about such injustice perpetrated on our fellow humans for more than 20 years.

There are many other secular organisations which have dissented, such as the Society for the Protection of Unborn Children, LIFE Save the Unborn Child, Family and Youth Concern, the Pro-Life Alliance, the Medical Ethics Alliance and even a parliamentary All-Party Pro-Life Group. For decades these organisations have opposed the arguments of abortionists, the 'bad scientists' whom Daniel Johnson identifies, and the ideological politicians.

The consequences of human individuals, albeit very young and small, being used as experimental material are almost too awful to contemplate. Certainly, all previous attempts at exploiting humans, such as slavery or the 'Nazi eugenics' mentioned by Mr Johnson, fill us now with horror. Today's human exploiters will undoubtedly be considered in the same light in years to come.

Chairman, The Association of Lawyers for the Defence of the Unborn, London WC2

From Dr Sophie Botros Sir: Daniel Johnson appears. like almost everyone else, including the government, to regard reproductive cloning as an even worse evil than 'therapeutic' cloning, and as an unimaginably iniquitous further step which 'therapeutic' cloning will tempt us to take. It is surprising, then, that all his serious moral arguments — those concerned with intrinsic wrongness rather than with technical risk assessment, or speculation about the ulterior motives of politicians conspiring to create a master race — apply only to 'therapeutic' and not to reproductive cloning. Surely it is the cloned offspring, whose own natural development is savagely cut short in order to provide new organs for its clone-parent, who is used 'merely as a means' to another's end — the practice Kant so unequivocally and absolutely condemned — and not the baby created through cloning for an infertile couple desperate for a child.

Incidentally, Kant's powerful argument — which of course only holds provided we assume with Mr Johnson, as many will not, that the oneor two-cell conceptus is an unborn child — does not single out 'therapeutic' cloning as any more evil than any other kind of research on embryos. whatever their source: testing a human to destruction contravenes Kant's proscription just as surely as does mining a human for 'spare parts'.

From Mr Reg Brissenden Sir: Daniel Johnson says that the President of the USA takes 'the culture of life' so seriously that 'he has even adopted the idiom of the Pope whose profound views he respects even when they disagree'. What Mr Johnson doesn't mention is that the Pope condemned Bush utterly for his record in carrying out executions in Texas. He also fails to mention that Bush's religion of Evangelical Methodism is regarded as a heresy by the Pope, and its followers doomed to eternal damnation.