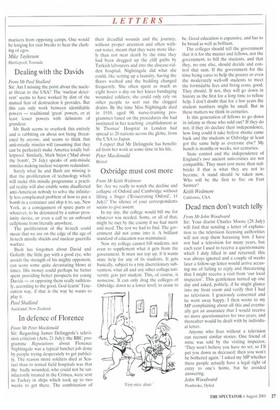 In defence of Florence

From Mr Peter Macdonald Sir: Regarding James Delingpole's television criticism (Arts, 21 July): the BBC programme Reputations about Florence Nightingale was a typical hatchet job done by people trying desperately to get publicity. The reason more soldiers died at Scutari than in tented field hospitals was that the badly wounded, who could not be satisfactorily treated in the Crimea, were sent to Turkey in ships which took up to two weeks to get there. The combination of their dreadful wounds and the journey, without proper attention and often without water, meant that they were more likely than not near death by the time they had been dragged up the cliff paths by Turkish labourers and into the disease-ridden hospital. Nightingale did what she could, like setting up a laundry, having the floors washed and the bedding changed frequently. She often spent as much as eight hours a day on her knees bandaging wounded soldiers; she could only rely on other people to sort out the clogged drains. By the time Miss Nightingale died in 1910. aged 90, nurse-training programmes based on the procedures she had instituted in her teaching establishment at St Thomas' Hospital in London had spread to 20 nations across the globe, from the USA to Japan.

I expect that Mr Delingpole has benefited from her work at some time in his life.