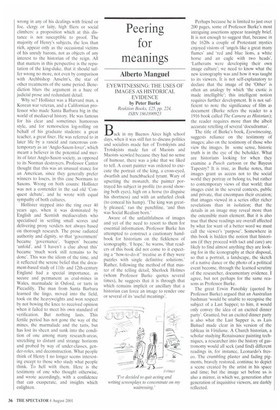 EYEWITNESSING: THE USES OF IMAGES AS HISTORICAL EVIDENCE by Peter Burke Reaktiort Books, £25, pp. 224, ISBN 1861890923 Back in my Buenos Aires high school days, when it was still fun to discuss politics and socialists made fun of Trotskyists and Trotskyists made fun of Maoists and Maoists scowled because they had no sense of humour, there was a joke that we liked to tell. A court painter was ordered to execute the portrait of the king, a cross-eyed, dwarfish and hunchbacked tyrant. Wary of upsetting the monarch, the painter portrayed his subject in profile (to avoid showing both eyes), high on a horse (to disguise his shortness) and with an unfurled cloak (to conceal his hump). The king was greatly pleased,' ran the punchline, 'and thus was Social Realism born.'

Aware of the unfaithfulness of images and yet of the need to resort to them for essential information, Professor Burke has attempted to construct a cautionary handbook for historians on the fickleness of iconography. 'I hope,' he warns, 'that readers of this book did not come to it expecting a "how-to-do-it" treatise as if they were puzzles with single definitive solutions.' Rather, following the method of that master of the telling detail, Sherlock Holmes (whom Professor Burke quotes several times), he suggests that it is through that which remains implicit or ancillary that a historian can force an image to render one or several of its 'useful meanings'.

Perhaps because he is limited to just over 200 pages, some of Professor Burke's most intriguing assertions appear teasingly brief. It is not enough to suggest that, because in the 1620s a couple of Protestant mystics enjoyed visions of 'angels like a great many flames' and 'red and blue lions, a white horse and an eagle with two heads', 'Lutherans were developing their own image culture'; we need to know what the new iconography was and how it was taught to its viewers. It is not self-explanatory to declare that the image of the 'Other' is often an analogy by which 'the exotic is made intelligible.; this intelligent notion requires further development. It is not sufficient to note the significance of film as document (Burke refers the reader to a 1916 book called The Camera as Historian); the reader requires more than the albeit accurate retelling of several 'clocudramas'.

The title of Burke's book, Eyewitnessing, suggests reliance on the testimony of images; also on the testimony of those who view the images. In some sense, historic truth is in the eye of the beholder. What are historians looking for when they examine a Punch cartoon or the Bayeux Tapestry? It is true, as Burke notes, that images grant us access not to the social world they portray or belong to, but rather to contemporary views of that world; that images exist in the several contexts, public and private, that encompass their creation; that images viewed in a series offer richer revelations than in isolation; that the details in an image may reveal more than the ostensible main element. But it is also true that these readings are overall affected by what for want of a better word we must call the viewer's 'purpose'. Somewhere in this book is hidden the notion that historians (if they proceed with tact and care) are likely to find almost anything they are looking for in the iconography at their disposal, so that a portrait, a landscape, the sketch of a native dance or the photo of a political event become, through the learned scrutiny of the researcher, documentary evidence. I agree, but not perhaps for the same reasons as Professor Burke.

The great Erwin Panofsky (quoted by Professor Burke) argued that an Australian bushman 'would be unable to recognise the subject of a Last Supper; to him, it would only convey the idea of an excited dinner party'. Granted, but an excited dinner party is also what the Last Supper is, as Luis Bufiuel made clear in his version of the tableau in Viridiana. A Church historian, a scholar studying Renaissance painting techniques, a researcher into the history of gastronomy would all seek (and find) different readings in, for instance, Leonardo's fresco. The crumbling plaster and fading pigments, bravely restored, continue to depict a scene created by the artist in his space and time; but the image set before us is also a mirror, in which we, generation after generation of inquisitive viewers, are darkly reflected.