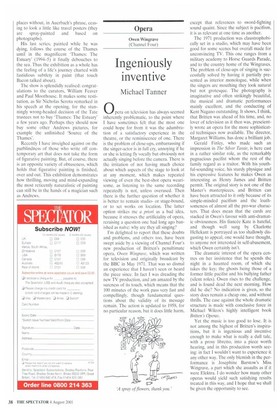 Opera on television has always seemed inherently problematic, to the point where I have sometimes felt that the most one could hope for from it was the adumbration of a satisfactory experience in the theatre, or the reminiscence of one. There is the problem of close-ups, embarrassing if the singer-actor is in full cry, annoying if he or she is letting fly vocally but obviously not actually singing before the camera. There is the irritation of not having much choice about which aspects of the stage to look at at any moment, which makes repeated viewing of even the best-shot opera wearisome, as listening to the same recording repeatedly is not, unless overused. Then there is the further question of whether it is better to remain studioor stage-bound, or to set works on location. The latter option strikes me a priori as a bad idea, because it stresses the artificiality of opera, reraising a question one had long ago banished as naïve: why are they all singing?

I'm delighted to report that these doubts and problems, and others too, have been swept aside by a viewing of Channel Four's new production of Britten's penultimate opera, Owen Wingrave. which was written for television and originally broadcast by the BBC in May 1971. That was so dismal an experience that I haven't seen or heard the piece since. In fact I was dreading the new TV production, and am amazed by the sureness of its touch, which means that the 100 minutes of the work pass very fast and compellingly, though fundamental questions about the validity of its message remain. The action is updated to 1958, for no particular reason, but it does little harm,

except that references to sword-fighting sound quaint. Since the subject is pacifism, it is as relevant at one time as another.

The 1971 production was claustrophobically set in a studio, which may have been good for some scenes but overall made for unconvincing TV. This one ranges from a military academy to Horse Guards Parade, and to the country home of the Wingraves. The problem of close-ups of singing is successfully solved by having it partially presented as interior monologue, while when the singers are mouthing they look natural but not grotesque. The photography is imaginative and often strikingly beautiful, the musical and dramatic performances mainly excellent, and the conducting of Kent Nagano outstanding. It shows, I think, that Britten was ahead of his time, and, no lover of television as it then was, presciently wrote an opera for the more sophisticated techniques now available. The director, Margaret Williams, has done a brilliant job.

Gerald Finley, who made such an impression in The Silver Tassie, is here cast in a rather similar role, as the remarkably pugnacious pacifist whom the rest of the family regard as a traitor. With his youthful-sounding voice, his sturdy physique and his expressive features he makes Owen as interesting as Henry James and Britten permit. The original story is not one of the Master's masterpieces, and Britten can have been attracted to it only because of its simple-minded pacifism and the loathsomeness of almost all the pro-war characters. That does mean that the cards are stacked in Owen's favour with anti-dramatic obviousness, His fiancee Kate is hateful, and though well sung by Charlotte Hellekant is portrayed as too shallowly disgusting to appeal, one would have thought, to anyone not interested in self-abasement, which Owen certainly isn't.

The dramatic interest of the opera centres on her insistence that he spends the night in a haunted room, of which she takes the key; the ghosts being those of a former little pacifist and his bullying father (silent roles). Owen rises to the challenge, and is found dead the next morning. How did he die? No indication is given, so the story does remain a cheap one, and without thrills. The case against the whole dramatic structure is made with conclusive force in Michael Wilcox's highly intelligent book Britten's Operas.

Yet the music is too good to lose. It is not among the highest of Britten's inspirations, hut it is ingenious and inventive enough to make what is really a dull tale, with a prosy libretto, into a piece worth hearing, and in this production worth seeing: in fact I wouldn't want to experience it any other way. The only blemish in the performance is Josephine Barstow's Miss Wingrave, a part which she assaults as if it were Elektra. I do wonder how many other operas would yield such satisfying results treated in this way, and I hope that we shall be given the opportunity to see.