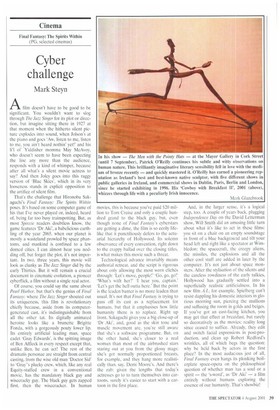 Afilm doesn't have to be good to be significant. You wouldn't want to slog through The Jazz Singer for its plot or direction, but imagine sitting there in 1927 at that moment when the hitherto silent picture explodes into sound. when Jolson's at the piano and goes `Aw, listen to me, listen to me, you ain't heard nothin' yet!' and his li'l of Yiddisher momma May McAvoy, who doesn't seem to have been expecting the line any more than the audience, responds with a kind of whimper, because after all what's a silent movie actress to say? And then Joley goes into this raggy version of 'Blue Skies', which in its very looseness stands in explicit opposition to the artifice of silent film.

That's the challenge that Hironobu Sakaguchi's Final Fantasy: The Spirits Within poses. It's based on some computer game of his that I've never played or, indeed, heard of, being far too busy trainspotting. But, as most Speccie readers doubtless know, the game features 'Dr Aki', a babelicious earthling of the year 2065, when our planet is mostly a wasteland prowled by space phantoms, and mankind is confined to a few domed cities. I can almost hear you nodding off, but forget the plot, it's not important. In two, three years, this movie will look as clunky as The Jazz Singer did by the early Thirties. But it will remain a crucial document in cinematic evolution, a pioneer cyberflick, a film without a single real actor.

Of course. you could say the same about Pearl Harbor, but that's the genius of Final Fantasy: where The Jazz Singer shouted out its uniqueness, this film is revolutionary chiefly because, aside from its computergenerated cast, it's indistinguishable from all the other tat. Its digitally animated heroine looks like a brunette Brigitte Fonda, with a gorgeously pouty lower lip. Its entirely artificial leading man, space cadet 'Gray Edwards', is the spitting image of Ben Aftleck in every respect except that, unlike Ben, he can act! The rest of the dramatis personae are straight from central casting, from the wise old man 'Doctor Sid' to 'Gray's plucky crew, which, like any real Equity-staffed crew in a conventional movie, has the mandatory black guy and wisecracky guy. The black guy gets zapped first, then the wisecracker. In human movies, this is because you've paid $20 million to Tom Cruise and only a couple hundred grand to the black guy, but, even though none of Final Fantasy's cyberstars are getting a dime, the film is so eerily lifelike that it punctiliously defers to the actuarial hierarchy of Hollywood. Its solemn observance of every convention, right down to the crappy ballad over the closing titles, is what makes this movie such a threat.

Technological advance invariably means authorial retreat, and the script is rigorous about only allowing the most worn clichés through: 'Let's move, people!"Go, go, go!' 'What's with her?' I hear you, captain.' 'Let's get the hell outta here.' But the point is the leaden banter is no more leaden than usual. It's not that Final Fantasy is trying to pass off its cast as a replacement for humans, but that it emphasises how little humanity there is to replace. Right up front, Sakaguchi gives you a big close-up of 'Dr Aki', and, good as the skin tone and muscle movement are, you're still aware that she's a software programme. But, on the other hand, she's closer to a real woman than most of the airbrushed stars staring out at you from the glossy mags: she's got normally proportioned breasts, for example, and they hang more realistically than, say, Demi Moore's. And there's the rub: given the lengths that today's actresses go to to turn themselves into cartoons, surely it's easier to start with a cartoon in the first place. And, in the larger sense, it's a logical step, too. A couple of years back, plugging Independence Day on the David Letterman show, Will Smith did an amusing little turn about what it's like to act in these films: you sit on a chair on an empty soundstage in front of a blue background and tilt your head left and right like a spectator at Wimbledon; the spacecraft, the creepy aliens, the missiles, the explosions and all the other cool stuff are added in later by the computer. It's not just about space monsters. After the stylisation of the silents and the careless rowdiness of the early talkies, Hollywood has gradually settled into a superficially realistic artificialness. In his new film Al., for example, Spielberg can't resist dappling his domestic interiors in glorious morning sun, piercing the mullions and suffusing the room in golds and beiges. If you've got an east-facing kitchen, you may get that effect at breakfast, but rarely so decoratively as the movies: reality long since ceased to suffice. Already, they edit and switch facial expressions in post-production, and clean up Robert Redford's wrinkles, all of which begs the question: why be held back by actors in the first place? In the most audacious jest of all, Final Fantasy even hangs its plonking boilerplate space-opera on the philosophical question of whether man has a soul or a spirit — the 's-word', as 'Dr Aki' — a film entirely without humans exploring the essence of our humanity. That's showbiz!