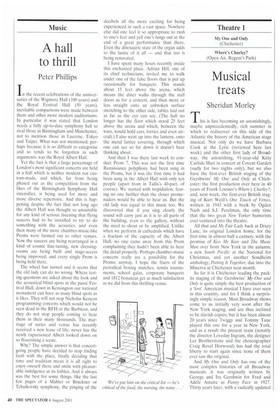 A hall to thrill

In the recent celebrations of the anniversaries of the Wigmore Hall (100 years) and the Royal Festival Hall (50 years), inevitable comparisons were made between them and other more modern auditoriums. In particular it was stated that London needs a fully up-to-date symphony hall to rival those in Birmingham and Manchester, not to mention those in Lucerne, Tokyo and Taipei. What was not mentioned, perhaps because it is so difficult to categorise and so tends to be forgotten in such arguments. was the Royal Albert Hall.

Yet the fact is that a large percentage of London's most significant concerts are held in a hall which is neither modern nor custom-made, and which, far from being phased out as the competition from the likes of the Birmingham Symphony Hall intensifies, is being used for more and more diverse repertoire. And this is happening despite the fact that not long ago the Albert Hall was thought so unsuitable for any kind of serious listening that flying saucers had to be installed to try to do something with the acoustics, and even then many of the more chamber-music-like Proms were farmed out to other venues. Now the saucers are being rearranged in a kind of cosmic fine-tuning, new dressingrooms are being built and stage-access being improved, and every single Prom is being held there.

The wheel has turned and it seems that the old lady can do no wrong. Where testing questions are asked about the look and the acoustical blind spots in the passé Festival Hall, down in Kensington our national monument can have as many blind spots as it likes. They will not stop Nicholas Kenyon programming concerts which would not be seen dead in the RFH or the Barbican, and they do not stop people coming to hear them in their many thousands. The marriage of series and venue has recently received a new lease of life: never has the newly caparisoned Albert looked down on so flourishing a scene.

Why? The simple answer is that concertgoing people have decided to stop finding fault with the place, finally deciding that time and tradition mean it is all right to enjoy oneself there and smile with pleasurable indulgence at its foibles. And it always was the best for some things, like the last few pages of a Mahler or Bruckner or Tchaikovsky symphony, the pinging of the decibels all the more exciting for being experienced in such a vast space. Nowhere else did one feel it so appropriate to rush to one's feet and yell one's lungs out at the end of a great performance than there. Even the dinosauric state of the organ adds to the lustre of it all — and that too is being renovated.

I have spent many hours recently inside this enchanted place. Adrian Hill, one of its chief technicians, invited me to walk under one of the false floors that is put up occasionally for banquets. This stands about 15 feet above the arena, which means the diner walks through the stall doors as for a concert, and then more or less straight onto an unbroken surface stretching to the other side, tables laid out as far as the eye can see. (The hall no longer has the floor which stood 25 feet above the arena and which, between the wars, would hold cars, lorries and even aircraft.) I also went up into the lantern, onto the metal lattice covering, through which one can see so far down it doesn't bear thinking about.

And then I was there last week to conduct Prom 7. This was not the first time Renaissance polyphony had been sung in the Proms, but it was the first time it had been sung in the Albert Hall with only ten people (apart from in Tallis's 40-part, of course). We started with trepidation, fearing no one further than the closer promenaders would be able to hear us. But the old lady was equal to this music too. We discovered that if you sing clearly the sound will carry just as it is to all parts of the building, even to the gallery, without the need to shout or be amplified. Unlike when we perform in cathedrals which have a fraction of the capacity of the Albert Hall, no one came away from this Prom complaining they hadn't been able to hear the detail properly. Perhaps chamber-music concerts really are a possibility for the Proms; anyway, I hope the fixers of the periodical boxing matches, tennis tournaments, school galas, corporate banquets and 1812 bonanzas get as much satisfaction as we did from this thrilling venue.