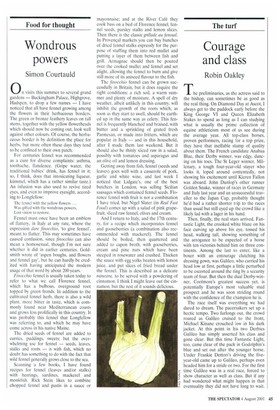 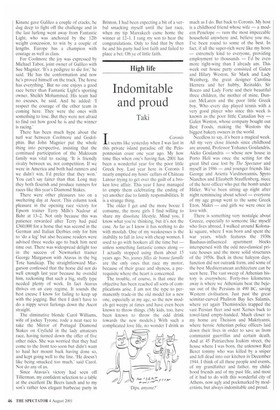 The preliminaries, as the actress said to the bishop, can sometimes be as good as the real thing. On Diamond Day at Ascot, I always get to the paddock early before the King George VI and Queen Elizabeth Stakes to spend as long as I can studying what is usually the prime collection of equine athleticism most of us see during the average year. All top-class horses, proven performers, racing for a top prize, they have that ineffable stamp of quality about them. The French candidate Anabaa Blue, their Derby winner, was edgy, dancing on his toes. The St Leger winner, Millenary, a tough four-year-old stayer who looks it, loped around contentedly, not showing his excitement until Kieren Fallon was aboard. John Dunlop's other runner Golden Snake, winner of races in Germany and Italy last year and an unsuccessful traveller to the Japan Cup, probably thought he'd had a rather shorter trip to the races than usual but still eyed up the crowd like a likely lad with a lager in his hand.

Then, finally, the real stars arrived. Fantastic Light, the crooked white blaze on his face curving up above his eye, tossed his head, walking tall, showing something of the arrogance to be expected of a horse with ten victories behind him on three continents. Among the last to enter, like a boxer with an entourage clutching his dressing gown, was Galileo, who carried his head low at first, perhaps a little perturbed to be escorted around the ring by a security team of four. But then the dual Derby-winner, Coolmore's greatest success yet, is potentially Europe's most valuable stud prospect and he was soon striding round with the confidence of the champion he is.

The race itself was everything we had dared to dream. The pacemakers set up a hectic tempo. Two furlongs out, the crowd roared as Galileo cruised to the front, Michael Kinane crouched low in his dark jacket. At this point in his two Derbies Galileo has simply asserted his class and gone clear. But this time Fantastic Light, too, came clear of the pack in Godolphin's blue and set out after the younger horse. Under Frankie Dettori's driving the fiveyear-old came up to Galileo, perhaps even headed him for a stride or two. For the first time Galileo was in a real race, forced to show character as well as class. But if any had wondered what might happen in that eventuality they did not have long to wait. Kinane gave Galileo a couple of cracks, he dug deep to fight off the challenge and in the last furlong went away from Fantastic Light, who was anchored by the 12th weight concession, to win by a couple of lengths. Europe has a champion with courage as well as class.

For Coolmore the joy was expressed by Michael Tabor, joint owner of Galileo with Sue Magnier. 'It's a pedigree to die for,' he said. 'He has the conformation and now he's proved himself on the track. The horse has everything.' But no one enjoys a good race better than Fantastic Light's sporting owner, Sheikh Mohammed. His team had no excuses, he said. And he added: 'I respect the courage of the other team in coming here. They were the ones with something to lose. But they were not afraid to find out how good he is and the winner is racing.'

There has been much hype about the turf war between Coolmore and Godolphin. But John Magnier put the whole thing into perspective, insisting that the continued participation of the Maktoum family was vital to racing. 'It is friendly rivalry between us, not competition. If we were in America and both had runners and we didn't win, I'd prefer that they won.' You can't say fairer than that. Long may they both flourish and produce runners for races like this year's Diamond Stakes.

There were other pleasures too on a sweltering day at Ascot. This column took pleasure in the opening race victory for Epsom trainer Terry Mills's Nadour al Bahr at 13-2. Not only because this was patience rewarded after Terry had paid 1360,000 for a horse that was second in the German and Italian Derbies only for him to 'do a leg' but also because readers were advised three weeks ago to back him next time out. There was widespread delight too in the success of Newmarket trainer George Margarson with Atavus in the big Tote handicap. The straightforward Margarson confessed that the horse did not do well enough last year because he overdid him, reckoning that such a big, stuffy type needed plenty of work. In fact Atavus thrives on an easy regime. It sounds the best excuse I know for failing to keep up with the jogging. But then I don't have to do a nippy seven furlongs down the Ascot straight.

The diminutive blonde Carol Williams, wife of jockey Tyrone, rode a neat race to take the Mirror of Portugal Diamond Stakes on Cryfield in the lady amateurs race, having turned down the offer of five other rides. She was worried that they had come to the front too soon but didn't want to haul her mount back having done so, and kept going well to the line, 'He doesn't like being smacked too much,' said Carol. Nor do any of us.

Since Atavus's victory had seen off Tillerman, my confident selection to a table at the excellent De Beers lunch and to my son's rather less elegant barbecue party in Brixton, I had been expecting a bit of a verbal smacking myself until the last race, when my tip Marrakech came home the winner at 12-1. I rang my son to hear the congratulations. Only to find that by then he and his party had lost faith and failed to place a bet. Oh ye of little faith.