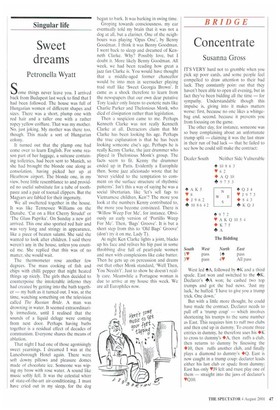 Some things never leave you. I arrived back from Budapest last week to find that I had been followed. The house was full of Hungarian women of different shapes and sizes. There was a short, plump one with red hair and a taller one with a rather ropey yellow coiffure. That was my mother, No. just joking. My mother was there too, though. This made a sort of Hungarian colony.

It turned out that the plump one had come over to learn English. For some reason part of her luggage. a suitcase containing toiletries, had been sent to Munich, so she had brought the blonde one along as consolation, having picked her up at Heathrow airport. The blonde one, in my view, bore little resemblance to and provided no useful substitute for a tube of toothpaste and a pair of toenail clippers. But the Magyars are fabled for their ingenuity.

We all sweltered together in the house. It was like Tennessee Williams on the Danube. 'Cat on a Hot Cherry Strudel' or 'The Glass Paprika'. On Sunday a new girl arrived. This one also sported red hair and was very long and stringy in appearance, like a piece of beaten salami. She said she wanted to look after children. I said there weren't any in the house, unless you counted me. She replied that this was of no matter, she would wait.

The thermometer rose another few degrees. The mass cooking of fish and chips with chilli pepper that night heated things up nicely. The girls then decided to counterpoise the intolerable inferno they had created by getting into the bath together — my bath as it turned out. I was, at the time, watching something on the television called The Russian Bride. A man was drowning in water. It seemed extraordinarily immediate, until I realised that the sounds of a liquid deluge were coming from next door. Perhaps having baths together is a residual effect of decades of communism. Everyone shares the means of ablution.

That night I had one of those agonisingly sweet yearnings. I dreamed I was at the Lanesborough Hotel again, There were soft downy pillows and pleasure domes made of chocolate ice. Someone was wiping my brow with rose water. A sound like music softly fell. It was the celestial whirr of state-of-the-art air-conditioning. I must have cried out in my sleep, for the dog

began to bark. It was barking in swing time.

Groping towards consciousness, my ear eventually told my brain that it was not a dog at all, but a clarinet. One of the neighbours was playing 'Opus One', by Benny Goodman. I think it was Benny Goodman. I went back to sleep and dreamed of Kenneth Clarke. Why? Possibly love, but I doubt it. More likely Benny Goodman. All week, we had been reading how great a jazz fan Clarke is. You would have thought that a middle-aged former chancellor would be into men in seersucker playing trad stuff like 'Sweet Georgia Brown'. It came as a shock therefore to learn from the newspapers that our own dear putative Tory leader only listens to esoteric nuts like Charlie Parker and Thelonious Monk, who died of dissipation rather than legislation.

Then a suspicion came to me. Perhaps Kenneth Clarke was not really Kenneth Clarke at all. Detractors claim that Mr Clarke has been looking his age. Perhaps the true explanation is that he has been looking someone else's age. Perhaps he is really Kenny Clarke, the jazz drummer who played in Thelonious Monk's group. The facts seem to fit. Kenny the drummer ended up in Paris. Evidently a Europhile then. Some jazz aficionado wrote that he 'never yielded to the temptation to comment on the surface structure of rhythmic patterns'. Isn't this a way of saying he was a social libertarian, like let's sell fags to Vietnamese children, Ken'? The more you look at the numbers Kenny contributed to, the more you become convinced. There is 'Willow Weep For Me', for instance. Obviously an early version of 'Forthlo Weep For Me'. Then, 'Bags' Groove'. It is but a short step from this to 'Old Bags' Groove' (don't try it on me, Lady T).

At night Ken Clarke lights a joint, blacks up his face and relives his hip past in some throbbing dive full of pearl-pale women and men with complexions like cake batter. Then he gets up on percussion and drums out that other Monk standard, 'Well Then, You Needn't'. Just to show he doesn't really care. Meanwhile a Portugese woman is due to arrive at my house this week. We are all Europhiles now.