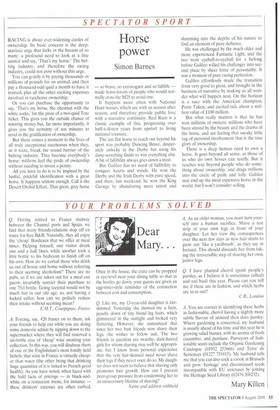 RACING is about ever-widening circles of ownership. Its basic concern is the deep, atavistic urge that lurks in the breasts of so many: a profound need to look at a fine animal and say, 'That's my horse.' The betting industry, and therefore the racing industry, could not exist without this urge.

You can gratify it by paying thousands or millions of pounds for an animal, and then pay a thousand-odd quid a month to have it trained, plus all the other exciting expenses involved in racehorse ownership.

Or you can purchase the opportunity to say. 'That's my horse, the chestnut with the white socks.' for the price of a two-quid Tote ticket. This gives you the outside chance of winning money but, far more importantly, it gives you the certainty of ten minutes to revel in the gratification of ownership.

But there comes a moment in the lives of all truly exceptional racehorses when they, as it were, break the sound barrier of the betting industry. They become everybody's horse; millions feel the pride of ownership without needing to invest a penny.

All you have to do is to be inspired by the lustful, prideful identification with a great horse. It happens seldom enough. Call it the Desert Orchid Effect. That great, grey horse — so brave, so extravagant and so fallible — made horse-lovers of people who would normally cross the M25 to avoid one.

It happens more often with National Hunt horses, which are with us season after season, and therefore provide public love with a narrative continuity. Red Rum is a classic example of this, progressing over half-a-dozen years from upstart to living national treasure.

The last flat horse to reach out beyond his sport was probably Dancing Brave, desperately unlucky in the Derby but using his daisy-scorching finish to win everything else. A bit of fallibility always goes down a treat.

But Galileo has no need of fallibility to conquer hearts and minds. He won the Derby and the Irish Derby with pure speed, and then, last weekend, he won the King George by abandoning mere talent and slumming into the depths of his nature to find an element of pure defiance.

He was challenged by the much older and more experienced Fantastic Light, and the two went eyeball-to-eyeball for a furlong before Galileo willed his challenger into second place by sheer force of personality. It was a moment of pure racing perfection.

Galileo effortlessly made the transition from very good to great, and brought in the business of narrative by making us all wonder what will happen next. On the horizon is a race with the American champion, Point Taken, and excited talk about a stallion value of £100 million.

But what really matters is that he has won millions of owners; millions who have been stirred by the beauty and the drama of the horse, and are feeling that sneaky little tug of personal involvement that is the true glory of ownership.

There is a deep human need to own a horse. It goes beyond all sense, as those of us who do own horses can testify. But it reaches way beyond people who do something about ownership, and drags millions into the circle of pride and folly. Galileo may end up the most expensive horse in the world, but I won't consider selling.