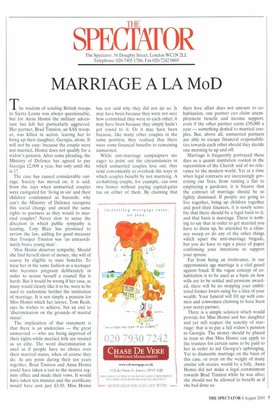 The wisdom of sending British troops to Sierra Leone was always questionable, but for Anna Homsi the military adventure has left her particularly aggrieved. Her partner, Brad Tinnion, an SAS trooper, was killed in action, leaving her to bring up their daughter, Georgia, alone. It will not be easy: because the couple were not married, Homsi does not qualify for a widow's pension. After some pleading, the Ministry of Defence has agreed to pay Georgia £2,000 a year, but only until she is 17.

The case has caused considerable outrage. Society has moved on, it is said, from the days when unmarried couples were castigated for 'living in sin' and their children condemned as bastards; why can't the Ministry of Defence recognise this social change and award the same rights to partners as they would to married couples? Never slow to sense the direction in which public sympathy is leaning, Tony Blair has promised to review the law, adding for good measure that Trooper Tinnion was 'an extraordinarily brave young man'.

Miss Homsi deserves sympathy. Should she find herself short of money, she will of course be eligible to state benefits. To treat her in the same fashion as a teenager who becomes pregnant deliberately in order to secure herself a council flat is harsh, But it would be wrong if her case, as many would clearly like it to be, were to be used to undermine further the institution of marriage. It is not simply a pension for Miss Homsi which her lawyer, Tom Reah, says he wishes to achieve, but an end to 'discrimination on the grounds of marital status'.

The implication of that statement is that there is an underclass — the great unmarried — who are being deprived of their rights while married folk are treated as an elite. The word discrimination is used as if people have no choice over their married status, when of course they do. At any point during their ten years together, Brad Tinnion and Anna Homsi could have taken a taxi to the nearest registry office and made their vows. It would have taken ten minutes and the certificate would have cost just £3.50. Miss Homsi has not said why they did not do so. It may have been because they were not sure how committed they were to each other; it may have been because they simply hadn't got round to it. Or it may have been because, like many other couples in the same position, they realised that there were some financial benefits to remaining unmarried.

While anti-marriage campaigners are eager to point out the circumstances in which unmarried couples lose out, they tend conveniently to overlook the ways in which couples benefit by not marrying. A co-habiting couple, for example, can own two homes without paying capital-gains tax on either of them. By claiming that their love affair does not amount to cohabitation, one partner can claim unemployment benefit and income support, even if the other partner earns £50,000 a year — something denied to married couples. But, above all, unmarried partners are able to escape financial responsibilities towards each other should they decide one morning to up and off.

Marriage is frequently portrayed these days as a quaint institution rooted in the superstition of the Church and of no relevance to the modern world. Yet at a time when legal contracts are increasingly governing our lives, from renting a flat to employing a gardener, it is bizarre that the contract of marriage should be so lightly dismissed. If people are going to live together, bring up children together and pool their finances, it is surely sensible that there should be a legal basis to it, and that basis is marriage. There is nothing to say that in order to get married you have to dress up, be attended by a chimney sweep or do any of the other things which upset the anti-marriage brigade, but you do have to sign a piece of paper confirming your intentions to support your spouse.

Far from being an irrelevance, in our opportunistic age marriage is a vital guard against fraud. If the vague concept of cohabitation is to be used as a basis on how wills are to be settled and pensions awarded, there will be no stopping your embittered former lovers suing for a slice of your wealth. Your funeral will fill up with conmen and conwomen claiming to have been your secret partner.

There is a simple solution which would provide for Miss Homsi and her daughter and yet still respect the sanctity of marriage: that is to pay a full widow's pension to Georgia. The money should be placed in trust so that Miss Homsi can apply to the trustees for certain sums to be paid to her in order to aid Georgia's upbringing. Yet to dismantle marriage on the basis of this case, or even on the weight of many similar sob stories, would be a folly. Anna Homsi did not make a legal commitment towards Brad Tinnion while he was alive; she should not be allowed to benefit as if she had done so.