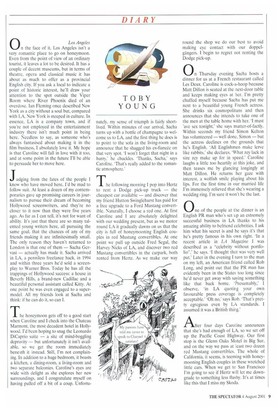 0Los Angeles n the face of it, Los Angeles isn't a very romantic place to go on honeymoon. Even from the point of view of an ordinary tourist, it leaves a lot to be desired. It has a couple of decent museums, but in terms of theatre, opera and classical music it has about as much to offer as a provincial English city. If you ask a local to indicate a point of historic interest, he'll draw your attention to the spot outside the Viper Room where River Phoenix died of an overdose. Ian Fleming once described New York as a city without a soul but, compared with LA, New York is steeped in culture. In essence. LA is a company town, and if you're not employed in the entertainment industry there isn't much point in being here. Needless to say, as someone who's always fantasised about making it in the film business, I absolutely love it. My hope is that Caroline will fall in love with it too, and at some point in the future I'll be able to persuade her to move here.

Judging from the fates of the people I know who have moved here, I'd be mad to follow suit. At least a dozen of my contemporaries gave up promising careers in journalism to pursue their dream of becoming Hollywood screenwriters, and they're no closer to it now than they were five years ago. As far as I can tell, it's not for want of ability. It's just that there are so many talented young writers here, all pursuing the same goal, that the chances of any of my friends making it are infinitesimally small. The only reason they haven't returned to London is that one of them — Sacha Gervasi — actually has made it. Sacha arrived in LA, a penniless freelance hack, in 1994 and within three years he'd sold a screenplay to Warner Bros. Today he has all the trappings of Hollywood success: a house in Beverly Hills, a brand-new Cadillac and a beautiful personal assistant called Kitty. At one point he was even engaged to a supermodel. All my friends look at Sacha and think: if he can do it, so can I.

The honeymoon gets off to a good start when Caroline and I check into the Chateau Marmont. the most decadent hotel in Hollywood. I'd been hoping to snag the Leonardo DiCaprio suite — a site of mind-boggling depravity — but unfortunately it isn't available, so we get the room immediately beneath it instead. Still, I'm not complaining. In addition to a huge bedroom, it boasts a kitchen, a dining-room, a living-room and two separate balconies. Caroline's eyes are wide with delight as she explores her new surroundings, and I congratulate myself on having pulled off a bit of a coup. Unfortu

nately, my sense of triumph is fairly shortlived. Within minutes of our arrival, Sacha turns up with a bottle of champagne to welcome us to LA, and the first thing he does is to point to the sofa in the living-room and announce that he shagged his ex-fiancée on that very spot. 'I won't forget that night in a hurry.' he chuckles. 'Thanks, Sacha,' says Caroline. 'That's really added to the romantic atmosphere.'

The following morning I pop into Hertz to rent a Dodge pick-up truck — the cheapest car available — and discover that my friend Hutton Swinglehurst has paid for a free upgrade to a Ford Mustang convertible. Naturally, I choose a red one. At first Caroline and I are absolutely delighted with our wedding present, but as we motor round LA it gradually dawns on us that the city is full of honeymooning English couples in red Mustang convertibles. At one point we pull up outside Fred Segal, the Harvey Nicks of LA, and discover two red Mustang convertibles in the carpark, both rented from Hertz. As we make our way

round the shop we do our best to avoid making eye contact with our doppelgangers. I begin to regret not renting the Dodge pick-up.

On Thursday evening Sacha hosts a dinner for us at a French restaurant called Les Deux. Caroline is cock-a-hoop because Matt Dillon is seated at the next-door table and keeps making eyes at her. I'm pretty chuffed myself because Sac ha has put me next to a beautiful young French actress. She drinks six cosmopolitans and then announces that she intends to take one of the men at the table home with her. 'I must 'ave sex tonight,' she says matter-of-factly. Within seconds my friend Simon Kelton has volunteered — well done, Simon — but the actress declines on the grounds that he's English. 'All Englishmen make terve like rabbits.' she declares. 'What zey lack in size zey make up for in speed.' Caroline laughs a little too heartily at this joke, and then teases me by glancing longingly at Matt Dillon. He returns her gaze with interest, a wolfish smile playing about his lips. For the first time in our married life I'm immensely relieved that she's wearing a wedding ring. I'm sure it won't be the last.

One of the people at the dinner is an English PR man who's set up an extremely successful business in LA thanks to his amazing ability to befriend celebrities. I ask him what his secret is and he says it's that he's pretty famous in his own right. 'In a recent article in LA Magazine I was described as a "celebrity without portfolio",' he says. 'I thought that was very well put.' Later in the evening I i urn to the man on my left, an American friend called Rob Long, and point out that the PR man has evidently been in the States too long since he'd never get away with saying something like that back home. 'Presumably,' I observe, 'in LA quoting your own favourable press coverage is completely acceptable, Oh no, says Rob. 'That's pretty egregious even by LA standards. I assumed it was a British thing.'

After four days Caroline announces that she's had enough of LA, so we set off up the Pacific Coast Highway. Our first stop is the Glenn Oaks Motel in Big Sur, and on the way we pass at least two dozen red Mustang convertibles. The whole of California, it seems, is teeming with honeymooning English couples in these wretched little cars. When we get to San Francisco I'm going to see if Hertz will let me downgrade to something less flashy. It's at times like this that I miss my Skocla.