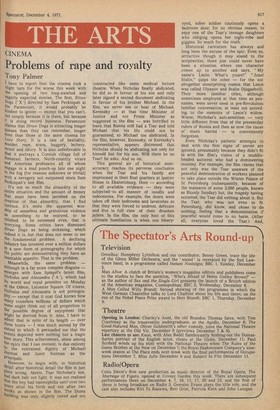 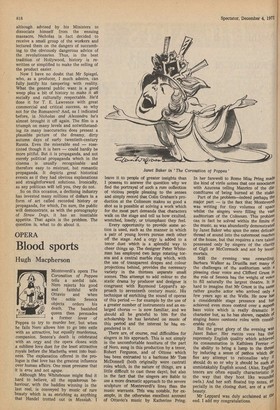 Problems of rape and royalty

Tony Palmer I have to report that the cinema took a Slight turn for the worse this week with the opening of two long-awaited and eagerly expected movies. The first, Straw bogs (' X ') directed by Sam Peckinpah at the Paramount, it would probably be kindest to ignore — except that you can't, .not simply because it is there, but because It is doing record business. Paramount Claims that Straw Dogs is attracting longer queues than they can remember, longer even than those at the same cinema for Love Story. It is a tale of bestiality, Murder, rape, arson, buggery, lechery, Incest and idiocy. It is also unbelievable in that it portrays a Cornish village full of Somerset farmers, North-country vicars and American professors all of whom engage in a mad punch-up late one night ln the fog (for reasons unknown or trivial) With a savagery not surpassed since Sam Peckinpah's last film.

It's not so much the absurdity of the entire situation and the amount of money that must have been lavished on the creation of that absurdity, that I find curious; it's more the apparent worship of senseless and gratuitous violence as something to be enjoyed, to be relished, to be esteemed even, that is Worrying. Some critics have dismissed Straw Dogs as being sickening, which Indeed it is, but that does not seem to me the fundamental problem. A declining Mdustry has invested over a million dollars In a new form of pornography for which the public are demonstrating they have an Insatiable appetite. That is the problem.

Meanwhile, the same problem — although in a far more complex disguise emerges with Sam Spiegel's latest film, Nicholas and Alexandra (' A '), which had Its world and royal premiere on Monday at the Odeon, Leicester Square. Of course, Nicholas and Alexandra is not pornograIThY — except that it cost God knows how Many countless millions of dollars which Some might think out of all proportion to the possible degree of enjoyment that Might be derived from it. Also, I have to admit that in spite of its length — over three hours — I was much moved by the extent to which it persuaded me that the events depicted were nothing but a tragic 1°ve story. This achievement, alone among the epics that I can recount, is due entirely

L° the restrained dignity of Michael J ' aYston and Janet Suzman as the Principals,

However, to begin with, in historical detail after historical detail the film is just Plain wrong. Alexis, Tsar Nicholas's son, had dark hair not light. It was not realised that the boy had haemophilia until over two ears after his birth and not after two Weeks as shown in the film. The Duma building was only slightly tiered and not

constructed like some medical lecture theatre. When Nicholas finally abdicated, he did so in favour of his son and only later signed a second document abdicating in favour of his brother Michael. In the film, we never see or hear of Michael. Kerensky — at that time Minister of Justice and not Prime Minister as suggested in the film — was horrified to learn that Russia still had a Tsar and told Michael that his life could not be guaranteed; so Michael too abdicated. In the film, however, Kerensky, or Kerensky's representative, appears distressed that Nicholas should be abdicating not only for himself but for his son. Will there be no Tsar? he asks. And so on.

This general air of historical semiaccuracy reaches its perverse conclusion when the Tsar and his family are imprisoned in their final quarters at Ipatiev House in Ekaterinburg. Here — according to all available evidence — they were subjected • to all manner of insults and indecencies. For example, the doors were taken off their bedrooms and lavatories so that they were forced to undress, defecate and live in full view of their drunken jailers. In the film, the only hint of this ultimate humiliation is when one bleary

eyed, sober soldier cautiously opens a bedroom door, for no obvious reason, to espy one of the Tsar's teenage daughters who obliging opens her night-robe and giggles. So much for the truth.

Historical caricature has always and long been the excuse of the epic. Even so, attractive though it may sound to the scriptwriter, there just could never have been a situation where one character comes up to another and says, "My name's Lenin. What's yours?" "Josef Stalin," quips the other — for the not altogether unsurprising reason that Lenin was called Ulyanov and Stalin Djugashvili. Their more familiar titles, although sometimes employed at that time as pennames, were never used in pre-Revolution familiar conversation, at least not according to the memoirs of Lenin's widow. Worse, Nicholas's anti-semitism — very little different from that of the presentday rulers of Russia and then as now the cause of much hatred — is conveniently forgotten.

Even Nicholas's pathetic attempts to deal with the first signs of unrest are ignored, presumably because they didn't fit in with the film's vision of a muddleheaded autocrat who had a domineering mummy. For example, the film claims that not only was the Tsar unaware of the peaceful demonstration of workers planned to take place outside the Winter Palace of St Petersburg (subsequently, because of the massacre of some 2,000 people, known as Bloody Sunday) but, the tragedy having occurred, the Tsar did nothing about it. But the Tsar, who was not even in St Petersburg, did know, and chose to do nothing, feeling that a demonstration if peaceful would come to no harm. (After all, everyone loved the Tsar.) And,

although advised by his Ministers to dissociate himself from the ensuing massacre, Nicholas in fact decided to receive a small group of the workers and lectured them on the dangers of succumbing to the obviously dangerous advice of the revolutionaries. Thus, in the best tradition of Hollywood, history is rewritten or simplified to make the selling of the product easier.

Now I have no doubt that Mr Spiegel, who, as a producer, I much admire, can fully justify his tampering with reality. What the general public want is a good weep plus a bit of history to make it all socially and culturally respectable. He'd done it for T. E. Lawrence with great commercial and critical success, so why not for the Romanovs? And, as I indicated before, in Nicholas and Alexandra he's almost brought it off again. The film is a triumph on many levels and notwithstanding its many inaccuracies does present a plausible picture of the dreamy, dirty autumn days of early twentieth-century Russia. Even the miserable end — rosetinted though it is here — could hardly be more pitiful. But it is propaganda, and not merely political propaganda which in the cinema is usually recognisable and therefore easy to mistrust, but romantic propaganda. It depicts great historical events as if they had obvious explanations and straightforward solutions. Ironically, as any politican will tell you, they do not.

So on this occasion, a declining industry has invested many millions of dollars in a form of art called recorded history or propaganda, for which, I'm sure, the public will demonstrate, as with the pornography of Straw Dogs, it has an insatiable appetite. That again is the problem. The question is, what to do about it.