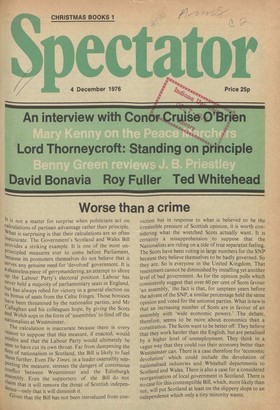 Worse than a crime

It is not a matter for surprise when politicians act on calculations of partisan advantage rather than principle. what is surprising is that their calculations are so often Inaccurate. The Government's Scotland and Wales Bill Provides a striking example. It is one of the most unPrincipled measures ever to come before Parliament, because its promoters themselves do not believe that it serves any genuine need for 'devolved' government. It is a shameless piece of gerrymandering, an attempt to shore uP the Labour Party's electoral position. Labour has ,never held a majority of parliamentary seats in England, hut has always relied for victory in a general election on Its bonus of seats from the Celtic fringes. Those bonuses have been threatened by the nationalist parties, and Mr Callaghan and his colleagues hope, by giving the Scots and Welsh sops in the form of 'assemblies' to fend off the nationalists at Westminster. , The calculation is inaccurate because there is every reason to suppose that this measure, if enacted, would nlisfire and that the Labour Party would ultimately be sfieen to have cut its own throat. Far from dampening the t,res of nationalism in Scotland, the Bill is likely to fuel "enl further. Even The Times, in a leader ostensibly sup°rtIng the measure, stresses the dangers of continuous onf1ict between Westminster and the Edinburgh ac,ssembly. Even the supporters of the Bill do not cilaim that it will remove the threat of Scottish indepenenee---only that it will diminish it. Given that the Bill has not been introduced from con viction but in response to what is believed to be the irresistible pressure of Scottish opinion, it is worth considering what the wretched Scots actually want. It is certainly a misapprehension to suppose that the Nationalists are riding on a tide of true separatist feeling. The Scots have been voting in large numbers for the SNP because they believe themselves to be badly governed. So they are. So is everyone in the United Kingdom. That resentment cannot be diminished by installing yet another level of had government. As for the opinion polls which consistently suggest that over 60 per cent of Scots favour 'an assembly,' the fact is that, for umpteen years before the advent of the SNP, a similar percentage held the same opinion and voted for the unionist parties. What is new is that an increasing number of Scots are in favour of an assembly with 'wide economic powers.' The debate, therefore, seems to be more about economics than a constitution. The Scots want to be better off. They believe that they work harder than the English, but are penalised by a higher level of unemployment. They think in a vague way that they could run their economy better than Westminster can. There is a case therefore for 'economic devolution which could include the devolution of nationalised industries and Whitehall departments to Scotland and Wales. There is also a case for a considered reorganisation of local government in Scotland. There is no case for this contemptible Bill, which, more likely than not will put Scotland at least on the slippery slope to an independence which only a tiny minority wants.