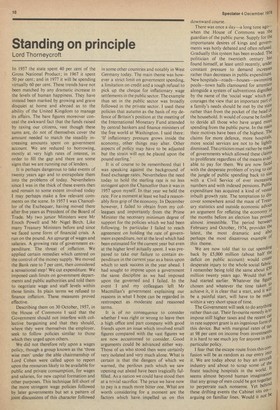 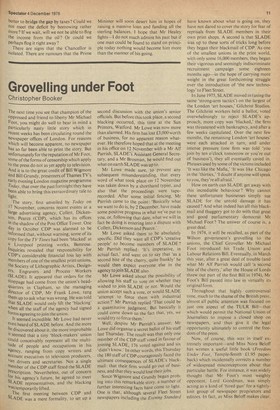 In 1957 the state spent 40 per cent of the Gross National Product; in 1967 it spent 50 per cent; and in 1977 it will be spending virtually 60 per cent. These trends have not been matched by any dramatic increase in the levels of human happiness. They have instead been marked by growing and grave disquiet at home and abroad as to the ability of the United Kingdom to manage its affairs. The bare figures moreover conceal the awkward fact that the funds raised by taxing our citizens, vast though these sums are, do not of themselves cover the amount needed to match the steadily increasing amounts spent on government account. We are reduced to borrowing, mostly at very high rates of interest, in order to fill the gap and there are some signs that we are running out of lenders.

It is perhaps dangerous to take events of twenty years ago and to extrapolate them into the problems of today. Nevertheless since I was in the thick of these events then and remain to some extent involved today I may perhaps make a few relevant comments on the scene. In 1957 I was Chancellor of the Exchequer, having moved there after five years as President of the Board of Trade. My two junior Ministers were Mr Enoch Powell and Mr Nigel Birch. Like many Treasury Ministers before and since we faced some form of financial crisis. A run on the pound. An upsurge of wages and salaries. A growing rate of government expenditure. The threat of inflation. We applied certain remedies which centred on the control of the money supply. We moved the Bank rate to 7 per cent, then considered a sensational step! We cut expenditure. We imposed cash limits on government departments and public authorities and told them to negotiate wage and staff levels within those limits. In plain terms we refused to finance inflation. These measures proved effective.

Describing them on 30 October, 1957, in the House of Commons I said that the Government should not interfere with collective bargaining and that they should, where they were themselves the employer, seek to follow policies similar to those which they urged upon others.

We did not therefore rely upon a wages policy, though a group known as the 'three wise men' under the able chairmanship of Lord Cohen were called upon to report upon the resources likely to be available for public and private consumption, for wages and salaries, for new capital formation and other purposes. This technique fell short of the more stringent wage policies followed by later governments but set a pattern of joint discussions of this character followed in some other countries and notably in West Germany today. The main theme was however a strict limit on government spending, a limitation on credit and a tough refusal to pick up the cheque for inflationary wage settlements in the public sector. The example thus set in the public sector was broadly followed in the private sector. I used these policies that autumn as the basis of my defence of Britain's position at the meeting of the International Monetary Fund attended by central bankers and finance ministers of the free world at Washington. I said there: If inflationary pressure grows inside the economy, other things may alter. Other aspects of policy may have to be adjusted but the strain will not be placed upon the pound sterling.'

It is of course to be remembered that I was speaking against the background of fixed exchange rates. Nevertheless the need today to hold the sterling rate is no less stringent upon the Chancellor than it was in 1957 upon myself. In that year we held the rate. For a moment at least we had a reasonably firm grip of the economy. In December however, I failed to obtain from my colleagues and importantly from the Prime Minister the necessary minimum degree of support for the policies which we had been following. In particular I failed to reach agreement on holding the rate of government expenditure, not at the level which had been estimated for the current year but even at the higher level actually spent. I was prepared to take our failure to contain expenditure in the current year as a basis upon which to seek success in the year ahead. I had sought to impose upon a government the same discipline as we had imposed upon the governed and I failed. In the event I and my colleagues left Mr Macmillan's government explaining our reasons in what I hope can be regarded in rest rospect as moderate and reasoned terms.

It is of no consequence to consider whether I was right or wrong to leave then a high office and part company with good friends upon an issue which involved small figures compared with the vast figures we are now accustomed to consider. Good arguments could be advanced either way. Those of us who stood then were certainly very isolated and very much alone. What is certain is that the dangers of which we warned, the perilous path which we saw opening out ahead have been tragically fulfilled. As a nation we could have stood then at a trivial sacrifice. The price we have now to pay is a much more bitter one. What are worth considering for a moment are the factors which have impelled us on this Spectator 4 December 1976 downward course.

There was once a day—a long time ago

when the House of Commons was the guardian of the public purse. Supply for the importunate desires of kings and governments was hotly debated and often refused. Gradually this system has been eroded. The politician of the twentieth century has found himself, at least until recently, under constant pressure to demand increases rather than decreases in public expenditure. New hospitals—roads—houses—swimming pools—town halls clamoured for attention alongside a system of subventions dignified by the name of the 'social wage' which en' courages the view that an important part of a family's needs should be met by the state rather than from the pocket of the head of the household. It would of course be foolish to deride all those who have urged more spending from the public purse. In the main their motives have been of the highest. The claims for more defence, more hospitals' more social services are not to be lightlY dismissed. The criticism must rather be made of governments which allowed these claiols to proliferate regardless of the means avail' able to pay for them. We are now faced with the desperate problem of trying to cut the jungle of public spending back to size with a Civil Service of ever increasing numbers and with indexed pensions. Public expenditure has acquired a kind of vested inbuilt growth rate. The temptation to discover somewhere amid the maze of Treas. ury statistics and outside economic advice an argument for reflating the econonnY Ill the months before an election has proved almost irresistible. The period between February and October, 1974, provides the latest, the most dramatic and also perhaps the most disastrous example 0f this theme.

We are now told that to cut spending back by £5,000 million (about half the deficit on public account) would create desperate injury to the whole social fabric. I remember being told the same about 0° million twenty years ago. Would that we had started earlier. Whatever the figure chosen and whatever the time taken tr; achieve it, it is clear that a start, and it be a painful start, will have to be illade within a very short space of time. The Government will seek to do anything to rather than cut. Their favourite remedy is impose still higher taxes and the recent colt in rate support grant is an ingenious form this device. But with marginal rates of ta% at 98 per cent on income from investments it is hard to see much joy for anyone in this particular policy. I fear that the escape route from this con" fusion will be as random as our entry it. We are today about to buy an aircraft' industry and about to scrap some of the, finest teaching hospitals in the world.. l' seems almost beyond human imagination that any group of men could be got together. to perpetrate such nonsense. Yet behine these drifting events the Cabinet sits ofl". arguing on familiar lines. Would it not

better to bridge the gap by taxes? Could we not meet the deficit by borrowing rather more? If we wait, will we not be able to flog the income from the oil ? Or could we Perhaps flog it right away?

There are signs that the Chancellor is isolated. There are rumours that the Prime Minister will soon desert him in hopes of raising a massive loan and funding all the sterling balances. I hope that Mr Healey fights-1 do not much admire his past but if one man could be found to stand on principle today nothing would become him more than the manner of his going.