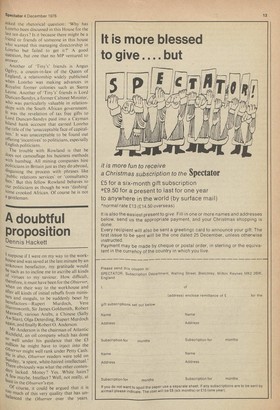 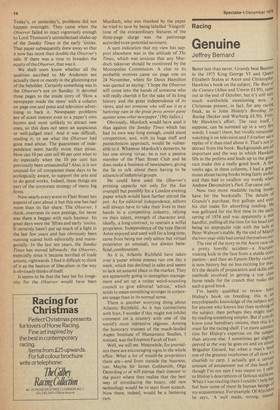 I suppose if I were on my way to the workhouse and was saved at the last minute by an Unknown benefactor, my gratitude would be such as to incline me to ascribe all kinds Of virtues to my saviour. How difficult, therefore, it must have been for the Observer, When on their way to the workhouse and after all kinds of initial rebuffs from ministers and moguls, to be suddenly beset by benefactors—Rupert Murdoch, Vere Harmsworth, Sir James Goldsmith, Robert Maxwell, various Arabs, a Chinese (Sally Aw Sian), Olga Deterding, Rupert Murdoch again, and finally Robert 0. Anderson. Mr Anderson is the chairman of Atlantic Richfield, an oil company which has done 30 well under his guidance that the £3 Million he might have to inject into the °„bserver might well rank under Petty Cash. („^e is also, Observer readers were told on .,,Unday, 'a spare, white-haired intellectual.' there obviously was what the other contenders lacked. Money? Yes. White hairs? leA few maybe. Intellect ? Well, not really, at ast in the Observer's eye. , Of course, it could be argued that it is 0 much of this very quality that has un°alanced the Observer over the years.

Today's, or yesterday's, problems did not happen overnight. They came when the Observer failed to react vigorously enough to Lord Thomson's unintellectual shake-up of the Sunday Times in the early 'sixties. That paper subsequently drew away so that it now has more than double the Observer's sale. If there was a time to broaden the equity of the Observer, that was it.

We shall soon know whether all the qualities ascribed to Mr Anderson are actually there or merely in the glistening eye of the beholder. Certainly something was in the Observer's eye on Sunday. It devoted three pages to the inside story of 'How a newspaper made the news' with a column on page one and press and television advertising to back it. Newspaper problems are of scant interest even to a paper's own buyers and most unlikely to attract new ones, so this does not seem an auspicious or well-judged start. And it was difficult, reading it, to see what the Observer had gone mad about. The guarantees of independence seem hardly more than pious. How can 10 per cent tell 90 per cent what to do especially when the 10 per cent has previously been unsuccessful? Also, it is not unusual for oil companies these days to be ecologically aware, to support the arts and to do good works. Indeed, these things are part of the corporate strategy of many big firms.

Now nearly every event in Fleet Street has aspects of cant about it but this one has had more than its fair share. The Observer, I think, overrates its own prestige, for never was there a beggar with such hauteur. Its great days were the 'fifties and early 'sixties.

It certainly hasn't put up much of a fight in the last few years and has obviously been running scared both editorially and managerially. In the last ten years, the Sunday Times has moved leftwards: the Observer, especially since it became terrified of trade unions, rightwards. I find it difficult to think of it as the bastion of libel alism in the way it obviously thinks of itself.

It seems to be that the best bet for longevity for the Observer would have been Murdoch, who was thanked by the paper he tried to save by being labelled 'Visigoth' (one of the extraordinary features of the three-page slurge was the patronage accorded to ex-potential saviours).

A sure indication that my view has support elsewhere was in the attitude of The Times, which was anxious that any Murdoch takeover should be monitored by the Monopolies Commission. A clue to its probable motives came on page one on 24 November, where Sir Denis Hamilton was quoted as saying: 'I hope the Observer will come into the hands of someone who will really cherish it for the sake of its long history and the great independence of its views, and not someone who will use it as a battering ram in the great press power game against some other newspaper.' (My italics.) Obviously, Murdoch would have used it thus against the Sunday Times which has had its own way long enough, could stand competition, and, with its huge staff and pantechnicon approach, would be vulnerable to it. Whatever Murdoch's demerits, he has one strong virtue; he is not a passive member of the Fleet Street Club and he does make a business of newspapers, giving the lie to talk about them having to be adjuncts of industrial groups.

He could have used the Observer's printing capacity not only for the Sun overspill but possibly for a London evening paper which .would have further stirred the pot. As for editorial independence, editors will always have to take their lives in their hands in a competitive industry, relying on their talent, strength of character and, ideally, a long contract, to restrain a wilful proprietor. Independence of the type David Astor enjoyed and used well for a long time, came from being not only editor but virtual proprietor an unusual, not always beneficial, combination.

As it is, Atlantic Richfield have taken over a paper whose presses run one day a week, which has declined in sales and seems to lack an assured place in the market. They are apparently going to strengthen management and set up a rather weird-sounding council to give editorial 'advice,' which tends to mean something stronger in corporate usage than in its normal sense.

There is another worrying thing about Atlantic Richfield. As it has connections with Iran,! wonder if this might not inhibit comment on a country with one of the world's most repressive regimes. Among the honorary trustees of the much-lauded Aspen Institute of Humanistic Studies, I noticed, was the Empress Farah of Iran.

Well, we will see. Meanwhile, for journalists there are encouraging signs in the whole affair. What a lot of would-be proprietors there are—and from outside the business, too. Maybe Sir James Goldsmith, Olga Deterding et al will pursue their interest to the point where they realise that the best way of introducing the hoary, old new technology would be to start from scratch. Now there, indeed, would be a battering ram.