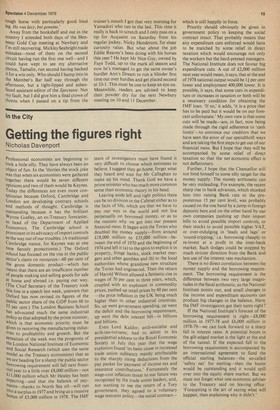 Getting the figures right

Professional economists are beginning to look a little silly. They have always been an object of fun. In the 'thirties the stock joke was that when six economists were gathered 'together there would be seven different Opinions and two of them would be Keynes. Today the differences are even more consPicuous because Oxford, Cambridge and London are developing contrary schools and methods of thought. Cambridge is Outstanding because it has the brilliant WYnne Godley, an ex-Treasury forecaster, as head of the Department of Applied Economics. The Cambridge school is Prominent in its advocacy of import controls as the way out of our troubles. (A traditional Cambridge stance, for Keynes was at one time fiercely protectionist.) The Oxford school has focused on the rise in the public sector's claim on resources-60 per cent of the gross domestic product—which has meant that there are an insufficient number of People making and selling goods for sale at home and abroad i.e. paying our way. (The Chief Secretary of the Treasury took this line in a speech last week, unaware that Oxford has now revised its figures of the Public sector share of the GDP from 60 to 55 per cent.) The London Business School has advocated much the same industrial Policy as that adopted by the prime minister, Which is that economic priority must be given to restoring the manufacturing industries to profitability and growth. But the sensation of the week was the prognosis of the London National Institute of Economic and Social Research (which uses the same Model as the Treasury economists) that as we are heading for a slump the public sector borrowing requirement will fall next finan ,,ial Year to a little over £8,000 million—not '11,000 million which Mr Healey has been expecting—and that the balance of payMents—thanks to North Sea oil—will run into a surplus in 1977 and bring us a massive bonus of £5,000 million in 1978. The IMF team of investigators must have found it very difficult to choose which estimates to believe. I suggest they go home, forget what they heard and wait for Mr Callaghan to make up his mind. Thank God we have a prime minister who has much more common sense than economic theory in his head.

Leaving aside left and right politics there can be no division in the Cabinet either as to the facts of life, which are that we have to pay our way in the world and not live perpetually on borrowed money, or as to the reasons why we got into our present financial mess. It began with the Tories who doubled the money supply—from around £18,000 million to £35,000 million—between the end of 1970 and the beginning of 1974 and left it (a) to the spivs to exploit it in property, fringe banks, stock market mergers and other gambles and (b) to the local authorities whose grandiose new structure the Tories had engineered. Then the return of Harold Wilson allowed a fantastic rise in wages of 70 per cent in three years, which, coupled with an explosion in commodity prices, pushed up retail prices by 60 per cent —the price inflation in the UK being much higher than in other industrial countries. So, up went government spending, up went the deficit and the borrowing requirement, up went the debt interest bill—in billions and billions.

Even Lord Kaldor, arch-socialist and arch-tax-torturer, had to admit in his presidential address to the Royal Economic Society in July this year that the wage explosion found Its basic cause in increased trade union militancy mainly attributable to the sharply rising deductions from the pay packet for payment of income tax and insurance contributions.' Fortunately the wage-cost inflation threat to our future was recognised by the trade union leaders, and, not wanting to see the return of a Tory government, they agreed to a voluntary wage restraint policy—the social contract which is still happily in force.

Priority should obviously be given in government policy to keeping the social contract intact. That probably means that any expenditure cuts enforced would have to be matched by some relief in direct taxation which would encourage not only the workers but the hard-pressed managers. The National Institute does not favour big expenditure cuts. A cut of £2,000 million next year would mean, it says, that at the end of 1978 national output would be 11 per cent lower and employment 400,000 lower. It is possible, it says, that some cuts in expenditure or increases in taxation or both will be a necessary condition for obtaining the IMF loan. 'If so,' it adds, 'it is a price that has to be paid but it would be on our forecast unfortunate.' My own view is that some cuts will be made—are, in fact, now being made through the rigid adherence to 'cash limits'—to convince our creditors that we have seen the error of our spendthrift ways and are taking the first steps to get out of our financial mess. But I hope that they will be accompanied by some relief of direct taxation so that the net economic effect is not deflationary.

Further, I hope that the Chancellor will not bind himself to some silly target for the money supply. The money arithmetic can be very misleading. For example, the recent sharp rise in bank advances, which shocked him into raising Bank rate to the preposterous 15 per cent level, was probably caused on the one hand by a jump in foreign deposits here and on the other hand by our own companies pushing up their import bills to avoid possible import controls, or their stocks to avoid possible highei VAT, or over-indulging in 'leads and lags' or 'round-tripping,' i.e. borrowing cheaply to re-invest at a profit in the inter-bank market. Such dodges could be stopped by much stricter direction from the Bank and less use of the interest rate mechanism.

If the National Institute's forecast of the borrowing requirement is right—£8,000 million in 1977-78 and £6,000 million in 1978-79—we can look forward to a sharp fall in interest rates. A potential boom in the gilt-edged market is the light at the end of the tunnel. If the expected fall in the borrowing requirement is accompanied by an international agreement to fund the official sterling balances—the so-called 'safety net' for sterling—then the boom would be outstanding and it would spill over into the equity share market. But we must not forget what one economic adviser to the Treasury said on leaving office: 'Forecasting is the art of saying what will happen, then explaining why it didn't.'