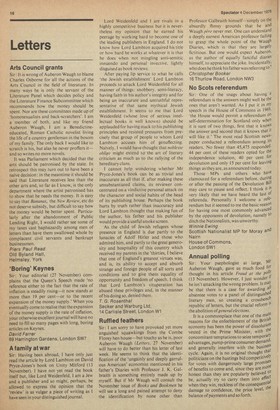 Sir: I am sorry to have provoked yet more anguished squawkings from the Combe Florey hen house—but touchy as he is, poor Auberon Waugh (Letters, 27 November) will have to do better than his letter of last week. He seems to think that the identification of the 'ungainly and deeply garrulous American' economist mentioned in his father's Diaries with Professor J. K. Galbraith is something entirely made up by myself. But if Mr Waugh will consult the November issue of Books and Bookmen he will see a long and pained attempt to deny the identification by none other than Professor Galbraith himself—simply on the absurdly flimsy grounds that he and Waugh pere never met. One can understand a deeply earnest American professor failing to grasp the whole point of the Waugh Diaries, which is that they are largelY fictitious. But one would expect Auberon. as the author of equally fanciful diaries himself, to appreciate the joke. I ncidentallYi who does he think his father was referring to? Christopher Booker 16 Thurlow Road, London NW3