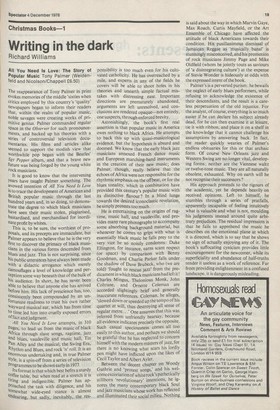 Writing in the dark

All You Need Is Love: The Story of Popular Music Tony Palmer (Weidenfeld and Nicolson/Chappell £6.50) The reappearance of Tony Palmer in print evokes memories of the middle 'sixties when critics employed by this country's `quality' newspapers began to inform their readers that, within the realm of popular music, noble savages were creating works of primitive genius. Palmer commanded regular space in the Observer for such pronouncements, and backed up his theories with a series of controversial television documentaries. His films and articles alike seemed to support the modish view that worthwhile pop began with the Beatles' Sgt Pepper album, and that a brave new future was being forged by the young white rock musicians.

It is good to know that the intervening Years have taught Palmer something. The avowed intention of All You Need Is Love IS to trace the development of American and British popular music through the last hundred years and, in so doing, to demonstrate the degree to which black musicians have seen their music stolen, plagiarised, bastardised, and merchandised for inordinate profit by whites.

This is, to be sure, the worthiest of proPosals, and its precepts are immaculate, but Palmer appears to believe that he is the very first to discover the primacy of black musicians in the various forms descended from blues and jazz. This is not surprising, since his public utterances have always been made With a didactic arrogance which merely camouflages a level of knowledge and perception some way beneath that of the bulk of his audience. In short, he has never been able to believe that anyone else has arrived before him. His lack of prescience has, too, consistently been compounded by an unfortunate readiness to trust his own rather wayward musical ear, which has from time to time led him into cruelly exposed errors of fact and judgment.

All You Need Is Love attempts, in 310 Pages, to lead us from the music of black Africa through slave songs, ragtime, jazz and blues, vaudeville and music hall, Tin Pan Alley and the musical, the Swing Era, Rhythm and Blues, and rock 'n' roll. It is an enormous undertaking and, in true Palmer Style, is a spin-off from a series of television Programmes to be shown early in 1977.

Its format is that which best befits a sturdy ePffee table, but when read at a stretch it is tiring and indigestible. Palmer has apProached the task with diligence, and his somewhat wide-eyed stance is almost endearing, but sadly, inevitably, the res ponsibility is too much even for his cultivated catholicity. He has overreached by a mile, and experts in any of the fields he covers will be able to shoot holes in his theories and unearth simple factual mistakes with distressing ease. Important directions are prematurely abandoned, arguments are left unresolved, and conclusions are rendered opaque—not entirely, one suspects, through enforced brevity.

Astonishingly, the book's first real assertion is that popular music in America owes nothing to black Africa. He attempts to back this up with quasi-musicological evidence, but the hypothesis is absurd and doomed. We know that the early black jazz musicians annexed French dance music and European marching-band instruments in the creation of their new music; does Palmer, though, really believe that the echoes of Africa were not responsible for the rhythmic emphasis on the offbeat, or for the blues tonality, which in combination have provided this century's popular music with its distinctive flavour? In a blind lunge towards the desired iconoclastic revelation, he simply protests too much.

He is entertaining on the origins of ragtime, music hall, and vaudeville, and provides many rare photographs to accompany some absorbing background material, but whenever he comes to grips with what is essentially black music he falls prey to the very vice he so noisily condemns: Duke Ellington, for instance, earns scant respect (or space) by comparison with Benny Goodman, and Charlie Parker falls under the shadow of Dave Brubeck, who (we are told) 'fought to rescue jazz' from the predicament in which black musicians had left it ! Charles Mingus, Thelonious Monk, John Coltrane, and Ornette Coleman are accorded slightingly brief and generally inaccurate references. Coleman, he alleges, 'slowed down or speeded up the tempo of his quartet at will, thus destroying all sense of regular metre. . .' One assumes that this was inferred from unfriendly hearsay, because all evidence indicates precisely the opposite. Such casual speciousness comes all too easily to this author, and perhaps we should be grateful that he has neglected to concern himself with the modern masters of jazz, for there is no knowing what scars his lordly pen might have inflicted upon the likes of Cecil Taylor and Albert Ayler. Between the decent chapter on Woody Guthrie and 'protest songs,' and his welcome excoriation of white rock's pathetically stillborn `revolutionary' intentions, he ignores the many contemporary black Soul and jazz musicians whose work has reflected and illuminated their social milieu. Nothing is said about the way in which Marvin Gaye, Max Roach, Curtis Mayfield, or the Art Ensemble of Chicago have affected the attitude of black Americans towards their condition. His pusillanimous dismissal of Jamaican Reggae as 'musically banal' is stunningly misconceived, and his promotion of rock musicians Jimmy Page and Mike Oldfield (whom he jointly touts as saviours of 'a disintegrating culture') at the expense of Stevie Wonder is hideously at odds with the expressed intent of the book.

Palmer's is a perverted purism: he bewails the neglect of early blues performers, while refusing to acknowledge the existence of their descendants, and the result is a careless perpetuation of the old injustice. For the analyst, of course, everything is so much easier if he can declare his subject already dead, for he can then examine it at leisure, tie it with ribbon, and place it on a shelf in the knowledge that it cannot challenge his assumptions by answering back. In fact, the reader quickly wearies of Palmer's endless obituaries for this or that archaic form. Of course New Orleans jazz and Western Swing are no longer vital, developing forms; neither are the Viennese waltz or twelve-tone music. They are all naturally obsolete, exhausted. Why on earth will he not recognise their successors?

His approach pretends to the rigours of the academic, yet he depends heavily on received opinions. Left to himself, he stumbles through a series of pratfalls, apparently incapable of feeling intuitively what is valuable and what is not, moulding his judgments instead around quite arbitrary prejudices. The residual impression is that he fails to apprehend the music he describes on the emotional plane at which it is directed, which is to say that he shows no sign of actually enjoying any of it. The book's suffocating cynicism provides little encouragement for the newcomer, while its superficiality and abundance of half-truths render it useless as a work of reference. Far from providing enlightenment in a confused landscape, it is dangerously misleading.