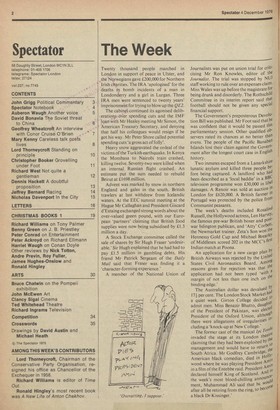 Twenty thousand people marched in London in support of peace in Ulster, and the Norwegians gave £200,000 for Northern Irish charities. The IRA 'apologised' for the deaths in bomb incidents of a man in Londonderry and a girl in Lurgan. Three IRA men were sentenced to twenty years' imprisonment for trying to blow up the QE2.

The cabinet continued its agonised deliberations over spending cuts and the IMF loan with Mr Healey meeting Mr Simon, the American Treasury Secretary, and denying that half his colleagues would resign if he got his way. Mr Peter Shore called potential spending cuts 'a gross act of folly'.

Heavy snow aggravated the ordeal of the victims of the Turkish earthquake. In Kenya the Mombasa to Nairobi train crashed, killing twelve. Seventy-two were killed when an internal Russian flight crashed. An estimate put the sum needed to rebuild Beirut at 1698 million.

Advent was marked by snow in northern England and gales in the south. British trawlers at last withdrew from Icelandic waters. At the EEC summit meeting at the Hague Mr Callaghan and President Giscard d'Estaing exchanged strong words about the over-valued green pound, with our European 'partners' claiming that British food supplies were now being subsidised by £1.3 million a day.

A Stock Exchange committee called the sale of shares by Sir Hugh Fraser 'undesirable.' Sir Hugh explained that he had had to pay £1 .5 million in gambling debts. His friend Mr Patrick Sergeant of the Daily Mail said that Fraser was finding it a 'character-forming experience.'

A member of the National Union of

Journalists was put on union trial for criticising Mr Ron Knowles, editor of the Journalist. The trial was stopped by NUJ staff working to rule over an expenses claim. Miss Wales was up before the magistrate for being drunk and disorderly. The Rothschild Committee in its interim report said that football should not be given any special financial support.

The Government's preposterous Devolution Bill was published. Mr Foot said that he was confident that it would be passed this parliamentary session. Other qualified observers rated its chances at no better than evens. The people of the Pacific Banabarl Islands lost their claim against the Govern' ment after the longest court case in English history. Two inmates escaped from a Lanarkshire lunatic asylum and killed three people before being captured. A landlord who had been described as a 'local baddie' in a BBC, television programme won 00,000 in libel damages. A Renoir was sold at auction in London for £620,000. A British farmer ill Portugal was protected by the police from Communist peasants. The week's deaths included Rosalind Russell, the Hollywood actress, Len Harvey, the famous pre-war British boxer and Postwar Islington publican, and 'Atty' Corbett, the Newmarket trainer. Zeta's Son won the Hennessy Gold Cup and Michael BrearleY of Middlesex scored 202 in the MCC's nrst Indian match at Poona. An application for a new cargo plan bY, British Airways was rejected by the Unite° States Civil Aeronautics Board. Anic311,_! reasons given for rejection was that IP' application had not been typed with 3 margin of not less than one inch on the binding edge.' The Australian dollar was devalued l)Y, 171 per cent. The London Stock Market hau a quiet week. Girton College decided t°, admit men. Miss Benazir Bhutto, daughteA of the President of Pakistan, was electe',. President of the Oxford Union, althoug" there were allegations of irregularities in' cluding a 'knock-up at New College.' The formtr cast of the musical Ipi ron e invaded the stage at its London theat,re claiming that they had been exploited bY management and would have to return r1.`e' South Atrica. Mr Godfrey Cambridge, 1, American black comedian, died in Ho wood where he was playing President Anl!".. in a film of the Entebbe raid. President Milli_ declared himself King of Scotland. Arid 1_11, the week's most blood-chilling annou la nce, ment, Muhammad Ali said that hc WOLI after all be retiring from the ring, to beccd1/ a black Dr Kissinger.'