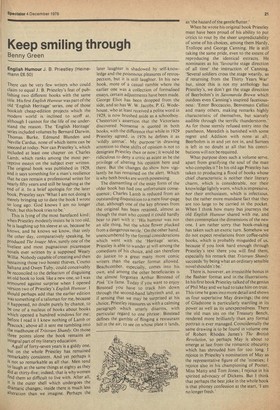 English Humour J. B. Priestley (Heinemann £6.50) There can be very few writers who could. Claim to equal J. B. Priestley's feat of publishing two different books with the same title. His first English Humour was part of the old 'English Heritage' series, one of those bookish cheap-edition projects which the modern world is inclined to scoff at, although I cannot for the life of me understand the reason. The 'English Heritage' series included volumes by Bernard Darwin, Thomas Burke, Edmund Blunden and Neville Cardus, none of which items can be sneezed at today. Nor can Priestley's, which included at least one chapter on Charles Lamb, which ranks among the most perceptive essays on the subject ever written. The original book was published in 1929, and it says something for a man's resilience that he can remain a professional writer for nearly fifty years and still be laughing at the end of it. In a brief apologia for the later book, Priestley says 'What I am not doing is Merely bringing up to date the book I wrote so long ago. God knows I am no longer fresh; but this book tries to be.'

This is lying of the most barefaced kind; When Priestley modestly insists he is too old, he is laughing up his sleeve at us, because he knows, and he knows we know, that only the other day, comparatively speaking, he Produced The linage Men, surely one of the liveliest and most pugnacious picaresque novels ever written by a supposed Weary Willie. Nobody capable of creating and then sustaining those two honest thieves, Cosmo Saltana and Owen Tuby, could conceivably be reconciled to the defeatism of disguising an old book to look like a new one, so I was armoured against surprise when I opened version two of Priestley's English Humour. I Should perhaps add that the earlier edition Was something of a talisman for me, because it happened, no doubt purely by chance, to be one of a nucleus of books about books Which opened a hundred windows for me; before I read it I knew nothing of Lamb or Peacock ; above all it sent me tumbling into the madhouse of Tristram Shandy. On those three points alone the book remains an Integral part of my literary education.

A gulf of forty-seven years is a giddy one, but on the whole Priestley has remained remarkably consistent. And yet perhaps it Is not so remarkable as all that. Men tend to laugh at the same things at eighty as they 'lid at thirty-five; indeed, that is why women !Ind them so difficult to live with. After all, it is the outer shell which undergoes the dramatic changes; inside there is Much less alteration than we imagine. Perhaps the later laughter is shadowed by self-knowledge and the poisonous pleasures of retrospection, but it is still laughter. In his new book, more of a casual ramble where the earlier one was a collection of formalised essays, certain adjustments have been made. George Eliot has been dropped from the side, and so has W. W. Jacobs. P. G. Wodehouse, who at least received a polite word in 1929, is now brushed aside as a schoolboy. Chesterton's assertion that the Victorians discovered Nonsense is quoted in both books, with the difference that while in 1929 Priestley agreed, in 1976 he defines it as 'wildly untrue'. My purpose' in drawing attention to these shifts of opinion is not to denigrate Priestley then or now; it would be ridiculous to deny a critic as acute as he the privilege of altering his opinion here and there. But the changes do show how vigilantly he has remained on the alert. Which is why both books are worth possessing.

The dismantling of the essay form of the older book has had one unfortunate consequence; Charles Lamb is reduced from an outstanding disquisition to a mere four-page chat, although one of the key phrases from the original has been retained, almost as though the man who coined it could hardly bear to part with it : 'His humour was not an idle thing, but the white flower plucked from a dangerous nettle.' On the other hand, unencumbered by the formal considerations which went with the 'Heritage' series, Priestley is able to wander at will among the comedians of his choice, and can therefore do justice to a great many more comic writers than the earlier format allowed. Beachcomber, especially, comes into his own, and among the other beneficiaries is the almost forgotten Arthur Binstead of Pink 'Un fame. Today if you want to enjoy Binstead you have to track him down through the second-hand labyrinth and, as if sensing that we may' be surprised at his choice. Priestley reassures us with a calming paragraph which utterly disarms, with particular regard to one phrase: Binstead defines the gamble of flinging a restaurant bill in the air, to see on whose plate it lands, as 'the hazard of the gentle flutter.'

When he wrote his original book Priestley must have been proud of his ability to put critics to rout by the sheer unpredictability of some of his choices, among them Hardy, Trollope and George Canning. He is still taking the same pride, even to the extent of reproducing the identical extracts. He nominates as his 'favourite stage direction of all time' the instruction of "Canning, 'Several soldiers cross the stage wearily, as if returning from the Thirty Years War' but, since this is not my anthology but Priestley's, we don't get the stage direction of Beerbohm's in Savonarola Brown which outdoes even Canning's inspired facetious ness: 'Enter Boccaccio, Benvenuto Cellini and many others, making remarks highly characteristic of themselves, but scarcely audible through the terrific thunderstorm.• As for those sternly refused entry into the pantheon, Meredith is banished with some regret and Addison with none at all; Beerbohm is in and yet not in, and Surtees is left in no doubt at all that his contributions will not be required.

What purpose does such a volume serve, apart from gratifying the soul of the man who compiles it ? In his old age Priestley has taken to producing a flood of books whose chief characteristic is neither their literary charm, which is considerable, nor their knowledge lightly worn, which is impreisive, nor their enthusiasm, which is infectious, but the rather more mundane fact that they are too large to be carried in the pocket. When I think how many bus journeys the old English Humour shared with me, and then contemplate the dimensions of the new one, I am rather sorry that book-making has taken such an exotic turn. Somehow we do not expect revelations from coffee-table books, which is probably misguided of us, because if you look hard enough through Priestley's text there you will find them, especially his remark that Tristram Shandy succeeds 'by being what an ordinary sensible novel shouldn't be.'

There is, however, an irresistible bonus in the flashier format and in the illustrations.

In his first book Priestley talked of the genius of Phil May and we had to take him on trust. This time he goes into more detail and shows us four superlative May drawings; the one of Gladstone is particularly startling in its power as well as its unexpectedness. There the old man sits on the Treasury Bench, rendered more brilliantly than any formal portrait is ever managed. Coincidentally the same drawing is to be found in volume one of Robert Rhodes James's The British Revolution, so perhaps May is about to emerge at last from the romantic obscurity which has shrouded him for too long. I rejoice in Priestley's nomination of May as the representative figure of the 'nineties; I rejoice also in his championing of Pooter, Miss Matty and Tom Jones; I rejoice in his spirited advocacy of Dickens. But I think that perhaps the best joke in the whole book is that phoney confession at the start, 'I am no longer fresh.'