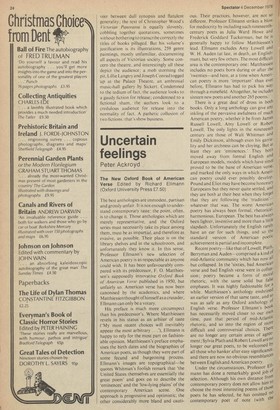 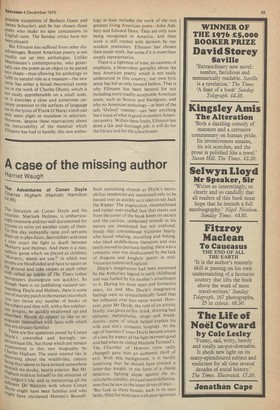 The best anthologies are immodest, partisan and grossly unfair. It is not enough to understand contemporary taste: the point, often, is to change it. Those anthologies which are merely representative, and the Oxford series must necessarily take its place among them, must be as impartial, and therefore as evasive, as possible. Their place is on the library shelves and in the schoolroom, and unfortunately they know it. In this sense, Professor Ellmann's new selection of American poetry is as respectable as anyone could wish. It has been unfavourably compared with its predecessor, F. 0. Matthiessen's supposedly innovative Oxford Book of American Verse published in 1950, but unfairly so. American verse has now been canonised by the academics, and where Matthiessen thought of himself as a crusader, Ellmann can only be a votary.

His preface is much more circumspect than his predecessor's. Where Matthiessen revels in his status as an arbiter of taste ('My most recent choices will inevitably appear the most arbitrary. . .'), Ellmann is happy to rely for the most part on fashionable opinion. Matthiessen's preface emphasises the birth dates and the biographies of American poets, as though they were part of some fecund and burgeoning process. Ellmann's images are topographical—he quotes Whitman's foolish remark that 'the United States themselves are essentially the great poem' and goes on to describe the 'eminences' and the `low-lying plains' of the contemporary American scene. One approach is progressive and optimistic, the other considerably More bland and cauti

ous. Their practices, however, are not so different. Professor Ellmann strikes a blow for mediocrity by including such nineteenthcentury poets as Julia Ward Howe and Frederick Goddard Tuckerman, but he is generally happy to follow Matthiessen's lead. Ellmann excludes Amy Lowell and W. H. Auden (at last, in death, an Englishman), but very few others. The most difficult area is the contemporary one: Matthiessen includes no poets born during or after the 'twenties—and here, at a time when American poetry is more 'important' than ever before, Ellmann has had to pick his way through a minefield. Altogether, he includes sixteen new poets and another 265 poems.

There is a great deal of dross in both books. Only a long anthology can give anY inkling of the pervasive awfulness of much American poetry, whether it be from James Russell Lowell, Amy Lowell or Robert Lowell. The only lights in the nineteenth century are those of Walt Whitman and Emily Dickinson, although even his garrulity and her archness can be cloying, But at least they are 'eminences.' They both moved away from formal English and European models, models which have since proved to be the bane of American verse. and marked the only ways in which American poetry could ever possibly develoP. Pound and Eliot may have become honorary Europeans but they never quite settled, and they are both at their best when they forge( that they are following the 'tradition.-whatever that was. The worst American poetry has always been formal, rhetorical. harmonious, European. The best has always been lighter, inventive and more than a little slapdash. Unfortunately the English rarelY have an ear for such things, and so the standard version of American poetic achievement is partial and incomplete. Recent poetry—like that of Lowell, Plat h. Berryman and Auden—comprised a kind of mid-Atlantic community which has now all but collapsed. In the 'sixties, bad American verse and bad English verse were in coitussion; poetry became a form of moral rhetoric, with the same solid but false emphases. It was highly fashionable for a while. Matthiessen's anthology enshrined an earlier version of that same taste, and so was as safe as any Oxford anthology 01. English verse. Professor Ellmann's book has necessarily moved closer to our own time, past that period of mid-Atlantic rhetoric, and so into the region of more difficult and controversial choices. There are no longer any certain areas of agree ment ; Sylvia Plat h and Robert Lowell are no longer our great poets, to be welcomed hY all those who hanker after easy significance, and there are now no obvious resemblances

between English and American poetry. ,

Under the circumstances, Professor Ell; mann has done a remarkably good job 0' selection. Although his own distance front contemporary poetry does not allow him t° choose the most interesting poems of those poets he has selected, he has omitted 00 contemporary poet of note (with the

Possible exceptions of Barbara Guest and James Schuyler), and he has chosen those Poets who make no easy concessions to English taste. The Sunday critics have not been pleased.

But Ellmann has suffered from other disadvantages. Recent American poetry is not r, _caddy cut up into anthologies. Unlike Matt hiessen's contemporaries, who generrally saw the poem as an object to be patted Into shape--thus allowing his anthology to fulfil its natural role as a museum—the new Verse has either a broad theoretical sweep (as in the work of Charles Olson), which is not easily apprehensible on a small scale, or it exercises a close and sometimes uncanny attention to the surfaces of language (as in the lyrics of Frank O'Hara) which can unIY seem slight or mundane in selection. However, despite these reservations about the intractability of the material which Ellmann has had to handle, this new antho

logy at least includes the work of the two greatest living American poets—John Ashbery and Edward Dorn. They are only now being recognised in America, and their work is still treated with derision by our resident poetasters. Ellmann has chosen their easier work, but some if it is more than simply representative.

There is a lightness of tone, an easiness of emphasis, a benevolent garrulity about the best American poetry which is not easily understood in this country; our own lyric sense has led us only toward bathos. That is why Ellmann has been berated for not including more readily acceptable American poets, such as Sexton and Snodgrass, and why no American anthology—at least of the safe 'Oxford' manner—can bear anything but a trace of what is good in modern American poetry. Within these limits, Ellmann has done a fair and thorough job; it will do for the library and for the schoolroom.