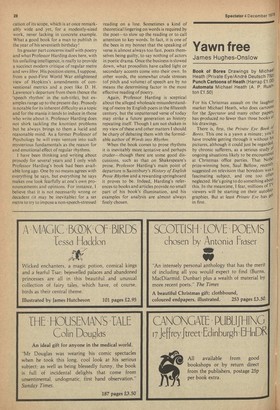 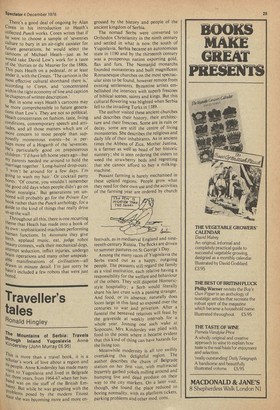 Book of Bores Drawings by Michael Heath (Private Eye/Andre Deutsch 75p) Punch Cartoons of Heath (Harrap £1.00) Automata Michael Heath (A. P. Rush" ton .50) For his Christmas assault on the laughter market Michael Heath, who does cartoor15 for the Spectator and many other papers' has produced no fewer than three books of his drawings. There is, first, the Private Eye Book of Bores. This one is a yawn a minute: youd have trouble getting through it without his pictures, although it could just be regarded, by chronic sufferers, as a serious study ongoing situations likely to be encounteree at Christmas office parties. That Nobel prize-winning bore, Saul Bellow, recently' suggested on television that boredom Was 11 fascinating subject, and one too ofteu neglected. He's going to do something abou! this. In the meantime, I fear, millions of 1-‘ viewers will be starting on their autobuir graphies. But at least Private Eve has Pt in first.

There's a good deal of ongoing by Alan Coren in his introduction to Heath's collected Punch works. Coren writes that if be were to choose a sample of 'seventies culture to bury in an air-tight canister for future generations, he would select the cartoons of Michael Heath—just as he would take David Low's work for a taste of the 'thirties or du Maurier for the 1880s. This puts Heath on a pedestal, or at least under it, with the Greats. 'The cartoon is the most effective cultural shorthand there is,' according to Coren, and 'concentrated Within the tight economy of line and caption lie chapters of written description.'

But in some ways Heath's cartoons may be more comprehensible to future generations than Low's. They are not so political. Heath concentrates on fashion, taste, living conditions, contemporary speech and attitudes, and all those matters which are of iTiore concern to most people than supPosedly momentous events—he is perhaps more of a Hogarth of the 'seventies. He's particularly good on preposterous Children : 'I'd have left home years ago—but MY parents needed me around to hold the marriage together.' Long-haired drop-outs:

.won't be around for a few days. I'm going to wash my hair.' Or cocktail party bores: 'Of course, you wouldn't remember the good old days when people didn't go on about nostalgia.' But generations yet unbored will probably go for the Private Eve hook rather than the Punch anthology, for a guide to the kind of things that really drive US up the wall.

Throughout all this, there is one recurring theme that Heath has made into a book of ,Its Own: sophisticated machines performing nUman functions. In Automata they give birth, applaud music, eat, judge robot beauty contests, walk their mechanical dogs, attempt seduction, inflict injuries. undergo °rain operations and many other unspeakable manifestations of civilisation—all cl, tawn in minute detail. I'm just sorry he nasn't included a few robots that were just bored.