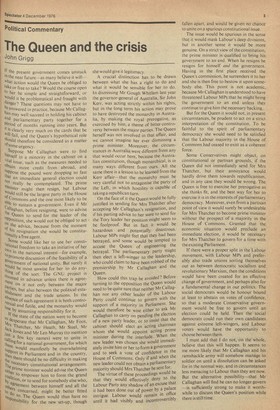 The Queen and the crisis

if the present government comes unstuck in the near future—as many believe it will-what action would the Queen be obliged to Lake or free to take? Would the course open to her be simple and straightforward, or Would it be problematical and fraught with danger? These questions may not have to be answered in practice, because Mr Cal aghan may well succeed in holding his cabinet and Parliamentary party together for a period of months running into years. But lt,is clearly very much on the cards that he will fail, and the Queen's hypothetical role should therefore be considered as a matter of some urgency. .Suppose Mr Callaghan were to find n-Iself in a minority in the cabinet on a vital issue, such as the measures needed to Obtain more credit from abroad, and suppose the pound were dropping so fast that an immediate general election could n°t really be contemplated. The prime Minister might then resign, but Labour wonld still be the largest party in the House er Commons and the one most likely to be 4ble to sustain a government. Even if Mr llaghan, before resigning, were to advise "le Queen to send for the leader of the "PPosition, she would not be obliged to act en the advice, because from the moment 11.f his resignation she would be constitu%nal IY a free agent. t '30111e would like her to use her constiational freedom to take an initiative of her cto)vvn in the national interest—for example, Promote discussion of the feasibility of a gwovernment of national unity. But surely it tke.uld be most unwise for her to do any'rig of the sort. The GNU project is th°°Pled in advance unless there is agreeOil it on it not only between the major Ph:Pies, but also between the political estabnnent and the trade unions. In the "v"sence of such agreement it is both control:Nal and futile, and the monarchy would se by assuming responsibility for it. s If the state of the nation were to become m° clesPerate that Mr Callaghan, Mr Foot, jars Thatcher, Mr Heath, Mr Steel, Mr tuck Jones and Mr Len Murray (to mention casiti, a few key names) were to unite in th 'Ing for a national government, for which s,,ere would manifestly be overwhelming thuPPort in Parliament and in the country, thenthere should be no difficulty in making The necessary Constitutional arrangements. eithe Prime minister would advise the Queen eo,e.r. to empower him to form the grand by"tion, or to send for somebody else who, ethagreernent between himself and all the to ers concerned, might be better fitted resd° so. The Queen would thus have no Ponsibility for the new set-up, though

she would give it legitimacy.

A crucial distinction has to be drawn between what she has a right to do and what it would be sensible for her to do. In dismissing Mr Gough Whitlam last year the governor-general of Australia, Sir John Kerr, was acting strictly within his rights, but in the long term his action may prove to have destroyed the monarchy in Australia, by making the royal prerogative, as exercised by him, a theme of bitter controversy between the major parties. The Queen herself was not involved in that affair, and we cannot imagine her ever dismissing a prime minister. Moreover, the circumstances in Australia were different from any that would occur here, because the Australian constitution, though monarchical, is in many ways different from ours. All the same there is a lesson to be learned from the

Kerr affair that the monarchy must be very careful not to antagonise the party of the Left, in which hostility is capable of taking a republican turn.

On the face of it the Queen would be fully justified in sending for Mrs Thatcher after accepting Mr Callaghan's resignation, and if his parting advice to her were to send for the Tory leader her position might seem to be foolproof. But in fact it would be hazardous and potentially disastrous. Labour MPs might feel that they had been betrayed, and some would be tempted to accuse the Queen of engineering the betrayal. The parliamentary party might then elect a left-winger to the leadership, who could claim to have been robbed of the premiership by Mr Callaghan and the Queen.

How could this trap be avoided? Before turning to the opposition the Queen would need to be quite sure that neither Mr Callaghan nor any other leader of the Labour Party could continue to govern with the support of a majority in Parliament. She would therefore be wise either to ask Mr Callaghan to carry on pending the election of a new party leader, or to insist that the cabinet should elect an acting chairman whom she would appoint acting prime minister during the interlude. When the new leader was chosen she would immediately invite him or her to form a government and to seek a vote of confidence in the House of Commons. Only if and when the new leader could not obtain a parliamentary majority should Mrs Thatcher be sent for.

The virtue of these proceedings would be that they would effectively deny to the Labour Party any shadow of an excuse that it had been done out of power by a palace i intrigue. Labour would remain n office until it had visibly and incontrovertibly fallen apart, and would be given no chance to unite on a spurious constitutional issue.

The issue would be spurious in the sense that it would mask Labour's deep divisions, but in another sense it would be more genuine. On a strict view of the constitution, the prime minister is qualified to bring his government to an end. When he resigns he resigns for himself and the government. Having in the first place received the Queen's commission, he surrenders it to her and she is then free to bestow it upon somebody else. This point is not academic, because Mr Callaghan is understood to have threatened Labour MPs that he might bring the government to an end unless they continue to give him the necessary backing.

But for the Queen it would not, in present circumstances, be prudent to act on a strict interpretation of the constitution. To be faithful to the spirit of parliamentary democracy she would need to be satisfied that the Labour majority in the House of Commons had ceased to exist as a coherent force.

Some Conservatives might object, on constitutional or partisan grounds, if the Queen did not immediately send for Mrs Thatcher, but their annoyance would hardly drive them towards republicanism, and in any case they would be wrong. The Queen is free to exercise her prerogative as she thinks fit, and the best way for her to exercise it is in the interests of parliamentary democracy. Moreover, even from a partisan point of view it would surely be undesirable for Mrs Thatcher to become prime minister without the prospect of a majority in the House of Commons. Granted that the economic situation would preclude an immediate election, it would be necessary for Mrs Thatcher to govern for a time with the existing Parliament.

If there were a proper split in the Labour movement, with Labour MPs and preferably also trade unions sorting themselves out as between democratic socialism and revolutionary Marxism, then the conditions would have been created for an effective change of government, and perhaps also for a fundamental change in our politics. The social democrats would be honour bound at least to abstain on votes of confidence, so that a moderate Conservative government would be free to govern until an election could be held. Then the social democrats could run their own candidates against extreme left-wingers, and Labour voters would have the opportunity to choose between them.

I must add that I do not, on the whole, believe that this will happen. It seems to me more likely that Mr Callaghan and his ramshackle army will somehow manage to soldier on until a dissolution can be asked for in the normal way, and in circumstances less menacing to Labour than they are now. But the alternative possibility—that Mr Callaghan will find he can no longer govern —is sufficiently strong to make it worthwhile to discuss the Queen's position while there is still time.