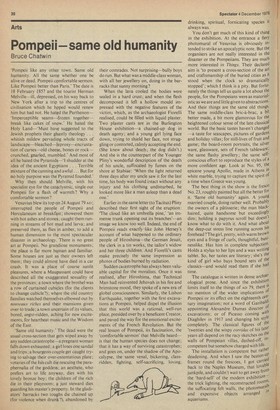 'Pompeii like any other town. Same old humanity. All the same whether one be alive or dead. Pompeii comfortable sermon. Like Pompeii better than Paris.' The date is 18 February 1857 and the tourist Herman Melville—ill, depressed, on his way back to New York after a trip to the centres of civilisation which he hoped would renew him but had not. He hated the Parthenon— 'Imperceptible seams—frozen together— break like cakes of snow.' He hated the Holy Land—'Must have suggested to the Jewish prophets their ghastly theology . . . whitish mildew pervading whole tracts of landscape—bleached—leprosy—encrustation of curses—old cheese, bones or rock— crunched, gnarled, mumbled.' And most of all he hated the Pyramids—'I shudder at the idea of the ancient Egyptians . . . Terrible mixture of the cunning and awful ... But for no holy purpose was the Pyramid founded.'

Why then should Melville, with his specialist eye for the cataclysmic, single out Pompeii for a flash of warmth? Why a comfortable sermon ?

Vesuvius blew its top on 24 August 79 AD; interrupted the people of Pompeii and Herculaneum at breakfast; showered them with hot ashes and stones; caught them running in streams of hot mud and larva; and preserved them, as flies in amber, to add a human dimension to the most spectacular disaster in archaeology. There is no great art at Pompeii. No grandiose monuments; the place is far more human and familiar. Some houses are just as their owners left them; they could almost have died in a car crash. It was a place of coarse sunlit pleasures, where a Maupassant could have described all the exaggerated sexuality of the provinces; a town where the brothel was a row of curtained cubicles (for the clients to change cubicle?); where the old country families watched themselves elbowed out by nouveaux riches and their mansions given over to trade; a town uncertain of its values, bored, angst-ridden, aching for new excitements, for heartbeat music and the Wisdom of the East.

'Same old humanity.' The dead were the usual cross-section that gets wiped away by any sudden catastrophe—a pregnant woman falls down exhausted; a girl loses one sandal and trips; a bourgeois couple get caught trying to salvage their over-ostentatious plate; votaries of the Isis cult die rescuing the paraphernalia of the goddess; an aesthete, who prefers art to life anyway, dies with his lovely bronze boy; the children of the rich die in their playroom; a just steward dies guarding his master's property. In the gladiators' barracks two toughs die chained up (for violence when drunk ?), abandoned by their comrades. Not surprising—bully boys do run. But what was a middle-class woman, with all her jewellery on, doing in the barracks that sunny morning?

When the lava cooled the bodies were sealed in a hard crust; and when the flesh decomposed it left a hollow mould impressed with the negative features of the victim, which, as the archaeologist Fiorelli realised, could be filled with liquid plaster. Two plaster casts are in the Burlington House exhibition—a chained-up dog in death agony; and a young girl lying face down, trying to shield her face, not struggling or contorted, calmly accepting the end. (She knew about death; the dog didn't.) And she is the counterpart of the Younger Pliny's wonderful description of the death of his uncle, suffocated by fumes on the shore at Stabiae: 'When the light returned three days after my uncle saw it for the last time, his body was found intact without any injury and his clothing undisturbed, he looked more like a man asleep than a dead one.'

Earlier in the same letter (to Tacitus) Pliny described their first sight of the eruption: 'The cloud like an umbrella pine,' an immense trunk opening out its branches'—an image we know too well. Indeed, the end of Pompeii reads exactly like John Hersey's account of what happened to the ordinary people of Hiroshima—the German Jesuit, the clerk in a tin works, the tailor's widow and her three children. And Fiorelli's casts make precisely the same impression as photos of bodies burned by radiation.

Sudden catastrophe has always been valuable capital for the moralists. Once it was realised, after Hiroshima, that Technical Man had reinvented Jehovah in his fire and brimstone mood, they spoke of a new era of global consciousness. Similarly, the Lisbon Earthquake, together with the first excavations at Pompeii, helped dispel the illusion that this world was a rational, well-run place, presided over by a beneficent Creator, and paved the way for the emotional excitements of the French Revolution. But the real lesson of Pompeii, its fascination, the 'comfortable sermon' that Melville heard— is that the human species does not change; that it has a way of surviving catastrophes; and goes on, under the shadow of the Apocalypse, the same venal, bickering, classridden, fighting, self-sacrificing, loving, drinking, spiritual, fornicating species it always was.

You don't get much of this kind of thing in the exhibition. At the entrance a fiery photomural of Vesuvius is obviously in tended to strike an apocalyptic note. But the organisers are not really interested in the disaster or the Pompeiians. They are much more interested in Things. Their declared aim is 'to present a cross-section of the art and craftsmanship of the buried cities as it stood when the clock so dramaticallY stopped' ; which I think is a pity. But fortu nately the things tell us quite a lot about the people, for the Pompeians were as materialistic as we are and little given to abstractions.

And their things are the same old things.

The same middle-class bric-a-brac, a bit better made, a bit more glamorous for the heightened colour sense of the late classical world. But the basic tastes haven't changed —a taste for seascapes, pictures of gardens and holiday villas; for still-lives of fruit and game; the board-room portraits, the silver ware, glassware, sets of French tableware; the same flashy jewellery; the same self conscious effort to reproduce the styles of a more confident age. Look at No. 95, the epicene young Apollo, made in Athens in white marble, trying to capture the spirit of a time when Greece was young. The best thing in the show is the fresco No. 23, roughly painted but all the better for it. 'Same old humanity' again. A young married couple, doing rather well. ProbablY the owners of a patisserie; the man black haired, quite handsome but exceedinglY dim; holding a papyrus scroll but doesn t know what to do with it. And what about the deep-cut stress line running across his forehead ?The girl, pretty, with warm brown eyes and a fringe of curls, thoughtful, busi nesslike. Has him in complete subjection. Holds a stylus to her lips and a wax writing tablet. So, her tastes are literary; she's the kind of girl who buys bound sets of the classics—and would read them if she had time.

The catalogue is written in dense archaeological prose. And since the exhibition limits itself to the things of AD 79, there IS no mention of the wider implications 0' Pompeii or its effect on the eighteenth cell". tury imagination; not a word of Garibald! appointing Alexandre Dumas director .01 excavations; or of Picasso coming with Diaghilev in 1917 and changing his style completely. The classical figures of the 'twenties and the wispy corridas of his later years all depend on the racy sketches on the walls of Pompeian villas, dashed-off, in competent but somehow charged with life. The installation is competent but rather deadening. And when I saw the beateni frames round the frescoes, I got carrie back to the Naples Museum, that lovable junkpile, and couldn't wait to get away fro° the 'hard-sell' of the modern exhibition the trick lighting, the reconstructed room!, the suffocating felt walls, the photomura.15 and expensive objects arranged In aquariums.