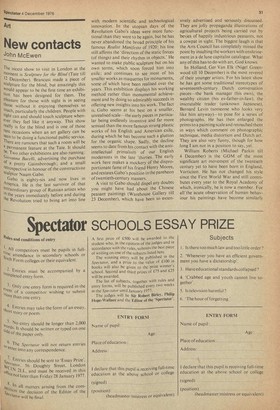 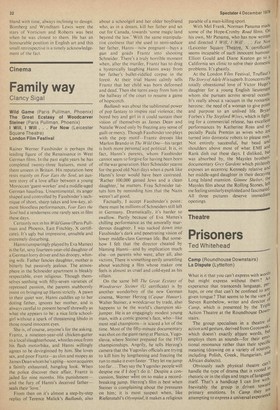 The nicest show to visit in London at the moment is Sculpture far tlw Blind (Tate till 12 December). Brancusi made a piece of sculpture for the blind, but amazingly this would appear to be the first time an exhibition has been designed for them. The Pleasure for those with sight is in seeing those without it enjoying themselves so Much, particularly the children. People with Sig ht can and should touch sculpture whenever they feel like it anyway. This show really is for the blind and is one of those rare occasions when an art gallery can be Seen to be doing a functional public service. There are rumours that such a room will be a Permanent feature at the Tate. It should Two other exhibitions are also running: ulovanna BareIli, advertising the purchase of a pretty Gainsborough; and a small retrospective in honour of the constructivist sculptor Naum Gabo.

Gabo is eighty-six and now lives in America. He is the last survivor of that extraordinary group of Russian artists who lo the years immediately before and during the Revolution tried to bring art into line with modern scientific and technological innovation. In the utopian days of the Revolution Gabo's ideas were more functional than they were to be again, but he has never abandoned the broad principle of his famous Realist Manifesto of 1920: his line still affirms the 'direction of the static forces (of things) and their rhythm in objects.' He wanted to make public sculpture but on his own terms, which soon forced him into exile; and continues to see most of his smaller works as maquettes for monuments, some of which have been realised over the years. This exhibition displays his working method rather than monumental achievement and by doing so admirably succeeds in offering new insights into his work. The fact is, Gabo seems at his best on a smaller, unrealised scale—the early pieces in particular being endlessly inventive and far more sensual than the more famous strung plastic works of his English and American exile, during which he has become such a glutton for the organic shape. Sadly, the decline seems to date from his contact with the antiintellectual primalism of our English modernists in the late 'thirties. The early work here makes a mockery of the disproportionate fame of his friend Henry Moore, and restates Gabo's position in the pantheon of twentieth-century masters.

A visit to Gabo should dispel any doubts you might have had about the Chinese peasant paintings (Warehouse Gallery till 23 December), which have been so exten

sively advertised and seriously discussed. They are jolly propaganda illustrations of agricultural projects being carried out by bevies of happily industrious peasants, not a cowpat in sight. The biggest laugh is that the Arts Council has completely missed the point by insulting the workers with enshrinement in a de luxe capitalist catalogue. What any of this has to do with art, God knows.

In Holland, Ger Van Elk (Nigel Greenwood till 10 December) is the most revered of their younger artists. For his latest show he has got some traditional stereotypes of seventeenth-century Dutch conversation pieces—the bank manager (his own), the wealthy citizen (his ex-father-in-law), the inscrutable trader (unknown Japanese), Bernard Levin (someone who looks very like him anyway)—to pose for a series of photographs. He has then enlarged the prints to a painting scale and retouched them in ways which comment on photographic technique, media distortion and Dutch art. They are also very funny, though for how long I am not in a position to say, yet.

William Roberts (Michael Parkin till 4 December) is the GOM of the most significant art movement of the twentieth century yet to have been born in England, Vorticism. He has not changed his style since the First World War and still contributes every year to the Royal Academy of which, ironically, he is now a member. For allthe acute observation of human behaviour his paintings have become similarly bland with time, always inclining to design. Bomberg and Wyndham Lewis were the stars of Vorticism and Roberts was best when he was closest to them. He has an honourable position in English art and this small retrospective is a timely acknowledgement of the fact.