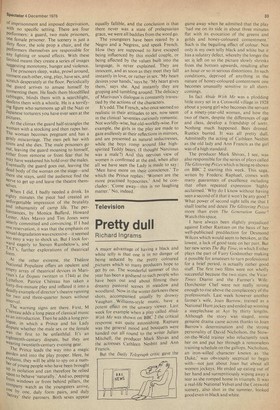 A major advantage of having a black and white telly is that one is in no danger of being seduced by the pretty coloured ,pictures which so many producers hope to get by on. The wonderful summer of this year has been a godsend to such people who have been out and about filming their dreamy pastoral scenes in meadow and woodland. Now in the winter darkness these shots, accompanied usually by drowsy Vaughan Williams-style music, have a potent effect on the unwary viewer. Last week for example when a play called Abide With Me was shown on BBC 2 the critical response was quite astonishing. Rapture was the general mood and bouquets were handed out all round to the writer Julian Mitchell, the producer Mark Shivas and the actresses Cathleen Nesbitt and Ann Francis.

But the Daily Telegraph critic gave the game away when he admitted that the play 'had me on its side in about three minutes flat with its evocation of the greens and golds and honey-coloured contentment.' Such is the beguiling effect of colour. Not only is my own telly black and white but it has a salutary defect, whereby the longer the set is left on so the picture slowly shrinks from the bottom upwards, resulting after an hour or so in serious distortions. In such conditions, deprived of anything in the nature of honey-coloured contentment one becomes unusually sensitive to all shortcomings.

In fact Abide With Me was a plodding tittle story set in a Cotswold village in 1928 about a young girl who becomes the servant of a ninety-year-old woman, and how the two of them, despite the differences of age and class, develop a friendship of sorts. Nothing much happened. Bees droned. Rustics buried. It was all pretty dull. Admittedly the acting of Cathleen Nesbitt as the old lady and Ann Francis as the girl was of a high standard.

The producer Mark Shivas, I see, was also responsible for the series of plays called The Glittering Prizes which is being re-shown on BBC 2 starting this week. This saga, writen by Frederic Raphael, comes with many guarantees of excellence including that often repeated expression 'highly acclaimed.' Why do I know without having seen a second of it that it won't be any good ? What power of second sight tells me that I shall loathe and detest The Glittering Prizes more than even The Generation Game? Watch this space.

I have always been slightly prejudiced against Esther Rantzen on the basis of her well-publicised predilection for Desmond Wilcox which would seem to betoken, at the lowest, a lack of good taste on her part. But her new series The Big Time, in which Esther plays the part of Fairy Godmother making it possible for amateurs to turn professional for a brief period, is actually rather good stuff. The first two films were not wholly successful because the two stars. the Vicar' Times Diarist and the Farmer's Wife; Dorchester Chef were not really strong enough to rise above the complacency of the professionals. Last week however another farmer's wife, Joan Barrow, trained as a National Hunt jockey and ended up winning a steeplechase at Ayr by thirty lengths. Although the story was staged, some genuine drama came across thanks to Joan Barrow's determination and the strong personality of David Nicholson, the Stowon-the-Wold trainer who reluctantly took her on and put her through a remorseless training schedule on the gallops. Nicholson, an iron-willed character known as 'the Duke,' was obviously sceptical to begin with—not just about Joan but about all women jockeys. He ended up eating out of her hand and surreptitiously wiping away a tear as she romped home in triumph. It was a real-life National Velvet and the Cotswold scenery, also shot in the summer, looked good even in black and white.