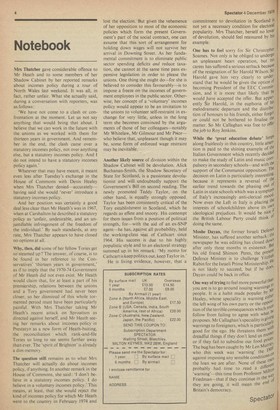 Mrs Thatcher gave considerable offence to Mr Heath and to some members of her Shadow Cabinet by her reported remarks about incomes policy during a tour of North Wales last weekend. It was all, in fact, rather unfair. What she actually said, during a conversation with reporters, was as follows: 'We have not come to a clash or confrontation at the moment. Let us not say anything that would bring that about. I believe that we can work in the future with the unions as we worked with them for thirteen years in government. And remember in the end, the clash came over a statutory incomes policy, not over anything else, but a statutory incomes policy. And I do not intend to have a statutory incomes policy again.'

Whatever that may have meant, it meant even less after Tuesday's exchange in the House of Commons with Denis Healey when Mrs Thatcher denied—accurately having said she would 'never' introduce a statutory incomes policy.

And her position was certainly a good deal less clear than Mr Heath's was in 1967, when at Carshalton he described a statutory policy as 'unfair, undesirable, and an unjustifiable infringement of the freedom of the individual.' By such standards, at any rate, Mrs Thatcher appears to have closed no options at all.

Why, then, did some of her fellow Tories get so steamed up? The answer, of course, is to be found in her reference to the Conservatives"thirteen years in government,' as if to imply that the 1970-74 Government of Mr Heath did not even exist. Mr Heath would claim that, for at least a part of his premiership, relations between the unions and a Tory government had never been closer, so her dismissal of this whole tormented period must have been particularly painful. With Mrs Thatcher taking Mr Heath's recent attack on Sproatism as directed against herself, and Mr Heath seeing her remarks about incomes policy in Prestatyn as a new form of Heath-baiting, the reconciliation which rank-and-file Tories so long to see seems further away than ever. The 'spirit of Brighton' is already a dim memory.

The question still remains as to what Mrs Thatcher will actually do about incomes policy, if anything. In another remark in the House of Commons, she said : 'I don't believe in a statutory incomes policy. I do believe in a voluntary incomes policy.' This means, at least, that she would reject the kind of incomes policy for which Mr Heath went to the country in February 1974 and lost the election. But given the vehemence of her opposition to most of the economic policies which form the present Government's part of the social contract, one can assume that this sort of arrangement for holding down wages will not survive her arrival in Downing Street. As her fundamental commitment is to eliminate public sector spending deficits and reduce taxation, she cannot at the same time pass expensive legislation in order to please the unions. One thing she might do—for she is believed to consider this favourably—is to impose a freeze on the incomes of government employees in the public sector. Otherwise, her concept of a 'voluntary' incomes policy would appear to be an invitation to the unions to volunteer self-restraint in exchange for very little, unless in the long term she becomes convinced by the arguments of those of her colleagues—notably Mr Whitelaw, Mr Gilmour and Mr Prior who believe that, unpleasant though it may be, some form of enforced wage restraint may be inevitable.

Another likely source of division within the Shadow Cabinet will be devolution. Alick Buchanan-Smith, the Shadow Secretary of State for Scotland, is a passionate devolutionist and will undoubtedly support the Government's Bill on second reading. The newly promoted Teddy Taylor, on the other hand, is equally strongly opposed. Taylor has been consistently critical of the Tory establishment in Scotland, which he regards as effete and snooty. His contempt for them issues from a position of political strength, for—with the aid of an ex-SNP agent he has, against all probability, held the working-class seat of Cathcart since 1964. His success is due to his highly populistic style and to an electoral strategy summed up in his remark : 'My motto for Cathcart is keep politics out, keep Taylor in.'

He is living evidence, however, that a commitment to devolution in Scotland is not yet a necessary condition for electoral popularity. Mrs Thatcher, herself no lover of devolution, should feel reassured by his example.

One has to feel sorry for Sir Christopher Soames. Not only is he obliged to undergo

an unpleasant heart operation, but l'as career has suffered a serious setback because of the resignation of Sir Harold Wilson. Sir Harold gave him very clearly to under. stand that he would be given the option of becoming President of the EEC Commis' sion, and it is more than likely that he would have accepted the offer. But apParently §ir Harold, in the euphoria of his melodramatic departure and the distrito tion of honours to his friends, either forgot or could not be bothered to finalise the matter. So Mr Callaghan was free to offer the job to Roy Jenkins.

While the 'great education debate' 100 along fruitlessly in this country, little attely tion is paid to the shining example of the Italian Government which recently decided to make the study of Latin and music all. pulsory in secondary schools—and with the support of the Communist opposition. The decision on Latin is particularly interesting, because it represents a reversal of the, earlier trend towards the phasing out 01 Latin in state schools which was a symPrcali of Italy's increasingly anti-clerical mood. Now even the Left in Italy is placing tile interests of schoolchildren above its ov".11, ideological prejudices. It would be nice 1,1 the British Labour Party could think '91 doing the same.

Moshe Dayan, the former Israeli Defence Minister, has suffered another setback: rile newspaper he was editing has closed 01 after only three months in existence. °lit his old friend Shimon Peres, the presell Defence Minister is to challenge Yitzhaer' Rabin for the Israeli Prime Ministership.° is not likely to succeed, but if he doe' Dayan could be back in office.

One way of trying to feel more powerful Veil you are is to go around issuing warnings,ir people. It is a habit made popular bY Healey, whose speciality is warning Oil, the left wing of his own party or the opPclsst tion of the terrible consequences which nnl,e follow from failing to agree with whal.rl, proposes. Mr Callaghan's speciality is givIfii! warnings to foreigners, which is partici-11011111 good for the ego. He threatens thern , dreadful things if they don't lend us rnorle: or if they fail to subsidise our food Price: The bug has been caught by Mr Len MurF' who this week was 'warning' the 117,0 against imposing any sensible conditions ("0 the loan we are after. None of these 11-it probably had time to read a differe0"0 'warning'--this time from Professor Friedman—that if they continue in the they are going, it will mean the end °I Britain's democracy.