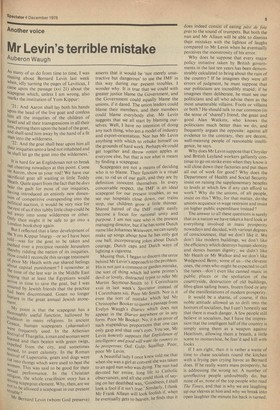 Auberon Waugh As many of us do from time to time, I was Musing about Bernard Levin last week When, idly turning the pages of Leviticus, I came upon the passage (xvi 21) about the scapegoat which, unless I am wrong, also Marks the institution of Yom Kippur: '21: And Aaron shall lay both his hands uPon the head of the live goat and confess hull all the iniquities of the children of Israel and all their transgressions in all their sins, putting them upon the head of the goat, and shall send him away by the hand of a fit man into the wilderness.

'22: And the goat shall bear upon him all their iniquities unto a land not inhabited and Ile shall let go the goat into the wilderness.

It is hard for an Englishman not to break out cheering nowadays at this point. Come on Aaron, show us your rod! We have our sacrificial goat all waiting in little Teddy Heath. Quite apart from the fact that he does bear the guilt for most of our iniquities, having introduced an entirely new dimension of competitive overspending into the Political auction, it would be very nice for the rest of us if this tubby little chap could be led away into some wilderness or other. 9IllY then might it be safe to go into a London bookshop again. But I reflected that a later development of the Yom Kippur liturgy—or so I have been Old—was for the goat to be taken and Pushed over a precipice outside Jerusalem thereby ridding the nation of its iniquities. HOw could I reconcile this savage treatment o'r Poor Mr Heath with our shared feelings about capital punishment ? I remember at lisle time of the last war in the Middle East "°13ing that at least the Egyptians would arrive in time to save the goat, but I was ssured by Jewish friends that the practice !lad been discontinued. Goats no longer feature in the great annual Jewish atone merit My My point is that the scapegoat has a inoroughly useful function, hallowed by t_radition in many religions. In ancient Greece, human scapegoats (pharmakoi) _ere. frequently used. In the Athenian festival of Thargelia, a man and woman were t_easted and then beaten with green twigs, exPelled from the city, and sometimes s!oned, to avert calamity. In the Roman leestival of Lupercalia, goats and dogs were ut Into thongs which were used to beat the swomen. This was said to be good for their r,,e)(1.14.1 Performance. In the Christian igion, the whole crucifixion story has a nor°, ng scapegoat element. Why, then,are we to be allowed a scapegoat in our present trouble') t\lr Bernard Levin (whom God preserve) asserts that it would be 'not merely unattractive but dangerous' to use the IMF in this way during our present troubles. I wonder why. It is true that we could with greater justice blame the Government, and the Government could equally blame the unions, if it dared. The union leaders could blame their members, and their members could blame everybody else. Mr Levin suggests that we all start by blaming ourselves. Well, I have no intention of doing any such thing, who am a model of industry and export-orientation. Nor has Mr Levin anything with which to rebuke himself on the grounds of hard work. Perhaps Ike could get together and throw rotten apples at everyone else, but that is not what is meant by finding a scapegoat.

Scapegoats are not a means of deciding who is to blame. Their function is a ritual one, to rid us of our guilt, and they are by definition innocent themselves. In every conceivable respect, the IMF is an ideal scapegoat for our present troubles, as we see our hospitals close down, our trains stop, our children grow a little. thinner. Shared hatred of the IMF might easily become a focus for national unity and purpose. I am not sure who is the present managing director, but if he has some Dutch name like Johannes Witteveen, we can surely make up songs about how he has only got one ball, incorporating jokes about Dutch courage, Dutch caps and Dutch ways of lighting a cigarette. Musing thus, I began to discern the error behind Mr Levin's approach to the problem. His is not just a common or garden mistake, the sort of thing which led some printer's devil or lovely, distracted typist to refer Mr Martin Seymour-Smith to I Corinthians xviii in last week's Spectator instead Of I Corinthians xiii. Poor Mr Smith. Nor is it even the sort of mistake which led Mr Christopher Booker to quote a passage from Evelyn Waugh's Diaries which does not appear in the Diaries anywhere or in any form. Poor Mr Booker. No, it is an error of such stupendous proportions that one can only gasp and shut one's eyes. You see, Mr Levin honestly supposes that Englishnzen intelligence and good will want the country toOf Levin honestly supposes that Englishnzen intelligence and good will want the country toOf be prosperous. Oof. Gulp. Squillup. Poor, poor Mr Levin. A beautiful lady I once knew told me that when she was a girl at convent she was taken to an aged nun who was dying. The nun had devoted her entire, long life to Catholic observances, and all she could think of saying on her deathbed was, 'Goodness, I shall look a fool if it isn't true.' Similarly, I think Mr Frank Allaun will look foolish if, when he eventually gets to heaven, he finds that it does indeed consist of eating pâté de foie gras to the sound of trumpets. But both the nun and Mr Allaun will be able to dismiss their mistakes with the lightest of laughs compared to Mr Levin when he eventually perceives the monstrosity of his error.

Why does he suppose that every major policy initiative taken by British governments in the last ten years has been demonstrably calculated to bring about the ruin of the country? If he imagines they were all errors of judgment, he must suppose that our politicians are incredibly stupid; if he imagines them deliberate, he must see our politicians and all who advise them as the most unutterable villains. Fools or villains or both ? He should talk to our common (in the sense of 'shared') friend, the great and good Alan Watkins, who knows the politicians much better than we do, and frequently argues the opposite: against all evidence to the contrary, they are decent, well-meaning people of reasonable intelligence, he says.

Why does Mr Levin suppose that Chrysler and British Leyland workers gallantly continue to go on strike even when they know it will close down their factories and put them all out of work for good ? Why does the Department of Health and Social Security insist on raising the supplementary benefits to levels at which few if any can afford to work ? Why do the unions, of all people, insist on this? Why, for that matter, do the unions acquiesce in wage restraint and insist on higher public expenditure instead ?

The answer to all these questions is surely that as a nation we have taken a hard look at everything involved in mass prosperity nowadays and decided, with various degrees of consciousness, that we don't like it. We don't like modern buildings, we don't like the efficiency which destroys human identity and denies human dignity; we didn't like Mr Heath or Mr Walker and we don't like Wedgwood Benn; some of us—the cleverer ones, the ones who might be expected to call the tunes—don't even like canned music in public places or the spoliation of the countryside, destruction of old buildings, fibre-glass sailing boats, frozen food or any of the manifestations of modern prosperity.

It would be a shame, of course, if this noble attitude allowed us to drift into the horrors of socialism, but I can't honestly see that there is much danger. A few people still believe in socialism, but I have the impression that the intelligent half of the country is simply using them as a weapon against Heathism, allowing them a breath, a little scene to monarchise, be fear'd and kill with looks ...

If I am right, then it is rather a waste of time to chase socialists round the kitchen with a frying pan crying havoc as Bernard does. If he really wants mass prosperity, he is addressing the wrong set. A number of unreflective people undoubtedly do, but none of us, none of the top people who read The Times, and that is why we are laughing up our sleeves at him and why we break into open laughter the minute his back is turned.