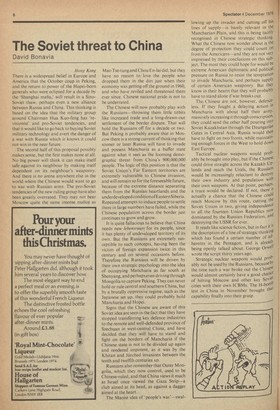 The Soviet threat to China

Hong Kong There is a widespread belief in Europe and America that the October coup in Peking, and the return to power of the Hupei-born generals who were eclipsed for a decade by the 'Shanghai mafia,' will result in a SinoSoviet thaw, perhaps even a new alliance between Russia and China. This thinking is based on the idea that the military group around Chairman Hua Kuo-feng has 'revisionist' and pro-Soviet tendencies, and that it would like to go back to buying Soviet military technology and avert the danger of a war with Russia which it knows it could not win in the near future.

The second half of this proposal possibly makes sense, but the first makes none at all. No big power will think it can make itself safe against its neighbour by making itself dependent on its neighbour's weaponry. And there is no arena anywhere else in the world where the Chinese would want to go to war with Russian arms. The pro-Soviet tendencies of the new ruling group have also been greatly overrated. They may not bear Moscow quite the same intense malice as Mao Tse-tung and Chou En-lai did, but they have no reason to love the people who dropped them in the dirt just when their economy was getting off the ground in 1960, and who have reviled and threatened them ever since. Chinese national pride is not to be underrated.

The Chinese will now probably play with the Russians—throwing them little titbits like increased trade and a long-drawn-out settlement of the border dispute. That will hold the Russians off for a decade or two. But Peking is probably aware that in Moscow there is a strong current of thinking that sooner or later Russia will have to invade and possess Manchuria as a buffer state against what it sees as the looming demographic threat from China's 900,000,000 people. The logic of this position is that the Soviet Union's Far Eastern territories are extremely vulnerable to Chinese invasion, and will remain so for the foreseeable future, because of the extreme distance separating them from the Russian heartlands and the underdevelopedcondition of Eastern Siberia. Repeated attempts to induce people to settle there in large numbers have failed, while the Chinese population across the border just continues to grow and grow.

It is quite fallacious to believe that China needs new lebensrawn for its people, since it has plenty of undeveloped territory of its own. But the Russians are extremely susceptible to such concepts, having been the victim of foreign expansion twice in this century and on several occasions before. Therefore the Russians will be driven by their own strategic psychology into the idea of occupying Manchuria as far south as Shenyang, and perhaps even driving through Mongolia to capture Peking. They can never hold or rule central and southern China, but by a brutally oppressive regime, such as the Japanese set up, they could probably hold Manchuria and Hopei.

Signs that the Chinese are aware of this Soviet idea are seen in the fact that they have stopped transferring key defence industries to the remote and well-defended province of Szechuan in west-central China, and have decided that they will have to stand and fight on the borders of Manchuria if the Chinese state is not to be divided up again and rendered impotent, as it was by the Khitan and Jijrched invasions between the tenth and twelfth centuries AD.

Russians also remember that Outer Mongolia, which they now control, used to be Chinese-ruled, and that China views it much as Israel once viewed the Gaza Strip—a club aimed at its head, as against a dagger aimed at the heart.

The Maoist idea of 'people's war' swal lowing up the invader and cutting off his lines of supply—is barely relevant in the Manchurian Plain, and this is being tacitlY recognised in Chinese strategic thinking. What the Chinese now wonder about is the degree of protection they could count on from the Americans—and they are not very impressed by their conclusions on this subject. The most they could hope for would be extreme American diplomatic and political pressure on Russia to resist the temptation to invade Manchuria, and perhaps supPlY of certain American weaponry. But they know in their hearts that they will probablY have to stand alone if war breaks out.

The Chinese are not, however, defenceless. If they fought a delaying action ln Manchuria with about half their arrnY. massively increasing it through conscription, they could send the other half pouring into Soviet Kazakhstan through the Dzungarion Gates in Central Asia. Russia would then have to fight on two fronts, while maintaining enough forces in the West to hold down East Europe.

Tactical nuclear weapons would prob.ably be brought into play, but if the Chinese could drive straight across the Kazakh UP lands and reach the Urals, the Russians would be increasingly reluctant to destroY their own industry and population with their own weapons. At that point, perhaPs, a truce would be declared. If not, there is actually a chance that the Chinese could reach Moscow by this route, cutting the Soviet Union in two, giving independence to all the fourteen Union Republics now

dominated by the Russian Federation, and destroying the USSR for ever.

It reads like science fiction, but in fact it is the description of a line of strategic thinking which has found a certain number of adherents in the Pentagon, and is alreadY being openly talked about. George Orwell wrote the script thirty years ago. Strategic nuclear weapons would prob' ably not be used by the Russians, becausebY the time such a war broke out the Chinese would almost certainly have a good chance of hitting Moscow and other key Soviet cities with their own ICBMs. The H-bonlb test in China in November brought that capability finally into their grasp.