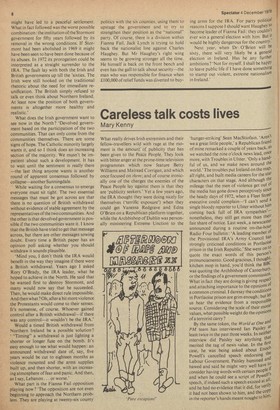 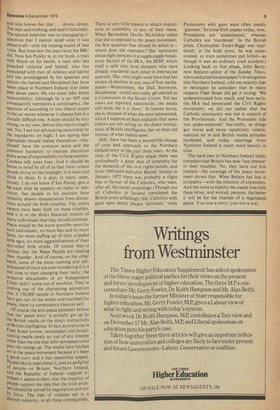 What really drives Irish extremists and their fellow-travellers wild with rage at the moment is the amount of publicity that has been given to the Peace People. They look with bitter anger at the prime-time television programmes which now feature Betty Williams and Mairead Corrigan, and which once focused on them; and of course ironically one of the charges the enemies of the Peace People lay against them is that they are 'publicity seekers.' Yet a few years ago, the IRA thought they were doing nicely for themselves ('terrific exposure') when they could get Vanessa Redgrave and Edna O'Brien on a Republican platform together, while the Archbishop of Dublin was personally ministering Extreme Unction to the

'hunger-striking' Sean MacStiofain. 'Aren't we a great little people,' a Republican friend of mine remarked a couple of years back, as we watched the nine o'clock news lead, once

more, with Troubles in Ulster. 'Only a hand' ful of us, and we make news around the

world.' The troubles put Ireland on the map, all right, and built media careers for the star characters on that stage. And although the mileage that the men of violence get out of

the media has gone down perceptively since the heady days of 1972, when a Fleet Street

executive could complain-1 can't send a single bloody reporter to Ulster without hinl coming back full of IRA sympathies.—

nonetheless, they still get more than their

fair share of notice. Last week, a newscaster announced during a routine on-the-hour

prison in the Irish Republic.' She went on to

quote the exact words of this person s pronunciamento. Good gracious, I thought' kitchen mop in hand, you'd think the BBC was quoting the Archbishop of CanterburY, or the findings of a government commission. What in fact they are doing is giving respect and attaching importance to the opinions of a common criminal. I daresay the conditions in Portlaoise prison are grim enough; but let us hear the evidence from a responsible source. Considering the scale of their moral values, what possible weight do the opinions of a terrorist carry ? By the same token, the World at One and PM team has interviewed Ian Paisley at least twice in the past three weeks. In neither interview did Paisley say anything that merited the tag of news value. In the first case, he was being asked about Enoch Powell's cancelled speech endorsing the Labour Government. Paisley hummed all hawed and said he might very well have t.°.. consider having words with certain people and when he could see a script of Powell 5 speech, if indeed such a speech existed at and he had no evidence that it did, for verilY it had not been shown to him, and the coPY in the reporter's hands meant nought to hum and who knows but that. . . drone, drone. The man said nothing, and said it fulsomely. The second interview was so unengaging o attention that I cannot recall what it was about at all—only the rasping sound of that voice. But interview the man twice the BBC did. Now Ian Paisley is, in my book, a man With blood on his hands, a man who has Preached violence and hatred, who has associated with men of violence and hatred and has promulgated by his speeches and actions the hatred and bloodshed that have taken place in Northern Ireland over these Past seven years. He too must take direct responsibility. Although he is an MP and consequently represents a constituency, the question of according to him liberal access to the air waves whenever it pleases him is a Morally difficult one. A story should be very strong, in my view, before this man is sought out. No, I am not advocating censorship by the mandarins on high; I am saying that Journalists should realise themselves—they should have the common sense and the common humanity to exercise discretion and a sense of responsibility in these matters. Careless talk costs lives. And it should be borne in mind by all of us that these violent People thrive on the limelight; it is meat and drink to them. It is also, in many cases, money. I do not know if Ian Paisley gets a fee each time he appears on radio or television, but people in his position have certainly drawn remuneration from discussions around the Irish troubles. Yes, entire Careers have been built on these troubles, and it is in the direct financial interest of Many individuals that they should continue. Peace would be the worst possible news for such individuals; no more fees and no more fame, no more puffing up of their crippled little egos, no more aggrandisement of their Shrivelled little minds. Of course they're furious that the Peace People are stealing their thunder. And of course, on the other hand, some of the more cunning and selfinterested of them are even wondering if it is not time to start changing their tacks; the tentative discussions of an Independent Ulster didn't come out of nowhere. They're coming out of the sharpening perception that if 150,000 people in Northern Ireland have got out on the streets and marched for Peace, there's a constituency there as well. Of course the anti-peace elements believe that the 'peace story' is actually got up by the British media on the direct instructions of British intelligence. In fact, as everyone in Fleet Street knows, newspapers and broadcasting media rarely act out of any interest Other than the one that sells newspapers and Puts the ratings up. The media have latched O n to the peace movement because it's been a good story and it has readership appeal. People like to read about it, and an awful lot of People—in Britain, Northern Ireland, a. nd the Republic of Ireland—support it; Indeed it seems evident that the majority of people support the idea that the Irish probem should be solved by negotiation and not hY. force. The men of violence are in a distinct minority, in all three communities. There is very little reason to attach importance or credibility to any of their views. When Bernadette Devlin McAliskey states that she is opposed to the peace movement, the first question that should be asked is— whom does she represent ? She represents about eight persons in a raggle7taggle breakaway faction of the IRA, the IRSP, which itself is split into rival elements who have already murdered each other in internecine quarrels. She, who might once have had her choice of election to any one of four parliaments—Westminster, the Dail, Stormont, Strasbourg—could not today get elected as a Communist in the Soviet Union. Yet her views are reported nationwide; the media still think she is a 'story.' In human terms, she is, because of what she once represented, which I suppose at least indicates that news editors are not acting on the direct instructions of British intelligence, but on their old instinct of what makes news.

Still, there has been a perceptible change of tone hnd approach to the Northern Ireland story in the past three years. At the time of the Civil Rights phase there was undoubtedly a great deal of sympathy for the demands of the civil rights people, and from 1969 until well after Bloody 3unday in January 1972 there was probably a slight bias in favour of the Catholics, who were, after all, the social underdogs. (Though not all Catholics in Ireland considered the British press unfailingly fair, Catholics with guns were nearly always 'terrorists,' while Protestants with guns were often merely 'gunmen.' In some Irish papers today, now, Protestants are 'assassinated,' whereas Catholics are 'murdered.' In the British press, Christopher Ewart-Biggs was murdered; in the Irish press, he was assassinated, or even sometimes just killed—as though it was an ordinary road accident.) Looking back on that phase, John Barry, now features editor of the Sunday Times, whoconducted his newspaper's investigation into Northern Ireland, told me recently that in retrospect he considers that in many respects Fleet Street did get it wrong. 'We underestimated how much, and how early, the IRA had penetrated the Civil Rights movement; we did not realise that the Catholic community was not in control of the Provisionals. And the Protestant side was under-explored.' Inevitably, as things got worse and more repulsively violent, reaction set in and British media attitudes hardened, and today reportage from Northern Ireland is much more laconic in tone.

The hard men in Northern Ireland today complain that Britain has now 'lost interest' in their troubles. No, they have not lost interest—the coverage of the peace movement shows that. What Britain has lost is sympathy—with the minority of extremists. And the more sympathy the media lose with these bitter, and wicked, persons, the better it will be for the chances of a negotiated peace. You lose a story; you win a war.