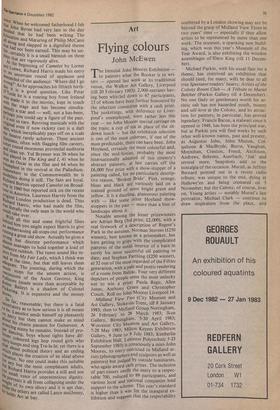 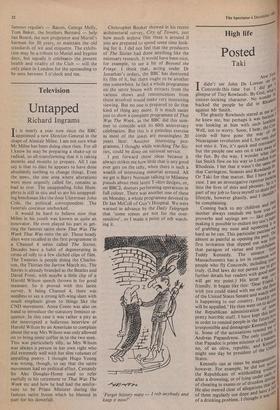 to painters what the Booker is to wri- ters — opened last week at its traditional venue, the Walker Art Gallery, Liverpool (till 20 February 1983): 2,000 entrants hav- ing been whittled down to 67 participants, 13 of whom have been further honoured by the selection committee with a cash prize. The junketings, with deference to Liver- pool's unemployed, were rather less this year — no John Moores special carriage on the train; a cup of tea in place of the sit- down lunch — but the exhibition selection is one of the most coherent, if one of the most predictable, there can have been. John Hoyland, certainly the most colourful and, since the mid-Sixties, probably the most internationally admired of this country's abstract painters, at last carries off the £6,000 first prize with a show-stopper of a painting called, for no particularly descrip- tive reason, 'Broken Bride'. Pink, orange, blues and black are variously laid on a stained ground of moss bright green and yellow. It is a dazzling, glamorous painting with — like some other Hoyland show- stoppers in the past — more than a hint of landscape about it.

Notable among the lesser prizewinners are Adrian Berg (3rd prize, £2,000), with a real firework of a description of Regent's Norman Stevens (£250 Park in the autumn, winner), best known as a printmaker, but here getting to grips with the complicated patterns of the sunlit interior of a barn in surely his most successful oil painting to date; and Stephen Farthing (£250 winner), at 32 one of the most regarded of the Fifties generation, with a pale and poetic rendering of a room from Balzac. Four very different depicters of people seem the most unlucky not to win a prize: Paula Rego, Allen Jones, Anthony Green and Christopher Couch. Roll on John Moores Liverpool 14. Midland View Two (City Museum and Art Gallery, Stoke-on-Trent, till 8 January 1983; then to Midland Group Nottingham, 26 February to 26 March 1983; Ikon Gallery, Birmingham, 5-30 April 1983; Worcester City Museum and Art Gallery, 7-28 May 1983; Milton Keynes Exhibition Gallery, 9 June to 9 July 1983; Kimberlin Exhibition Hall, Leicester Polytechnic 5-23 September 1983) is consciously a mini-John Moores, its entry restricted to Midland ar- tists (photographers and sculptors as well as painters) but judged by outside luminaries, who again award cash prizes. The inclusion of part-timers swells the entry to a respec- table 700, reduced to 89 participants, and various local and national companies lend support to the scheme. This year's standard is higher than it was for the inaugural ex- hibition and suggests that the respectability conferred by a London showing may not be beyond the grasp of Midland View Three in two years' time — especially if they allow artists to be represented by more than one work. The museum, a spanking new build- ing, which won this year's Museum of the Year Award, is also exhibiting the wooden assemblages of Dave King (till 11 Decem- ber).

Michael Parkin, with his usual flair for a theme, has contrived an exhibition that should (and, for many, will) be dear to all true Spectator readers' hearts: Artists of the Colony Room Club — A Tribute to Muriel Belcher (Parkin Gallery till 4 December). No one (lady or gentleman) worth his ar- tistic salt has not hazarded youth, money and self-love at the Colony, and its attrac- tion for painters, in particular, has proved legendary. Francis Bacon, a stalwart since it opened in 1948, has been the principal star, but at Parkin you will find works by such other well-known names, past and present, as Augustus John, John Minton, Col- quhoun & MacBryde, Burra, Vaughan, Moynihan, Craxton, Freud, Aitchison, Andrews, Behrens, Auerbach, `Jak' and several more. Snapshots add to the nostalgia of the occasion. Muriel, as Jeffrey Bernard pointed out in a recent radio tribute, was unique to the end, dying at Hallowe'en and being cremated on 5 November; but the Colony, of course, lives on. Young artists — notably Muriel's last portraitist, Michael Clark — continue to draw inspiration from the place, and

famous regulars — Bacon, George Melly, Tom Baker, the brothers Bernard — help Ian Board, the new proprietor and Muriel's barman for 30 years, to maintain the old standards of wit and etiquette. The exhibi- tion may be a tribute to Muriel and bygone days, but equally it celebrates the present health and vitality of the Club — still the only place in London for the upstanding to be seen between 3 o'clock and tea.