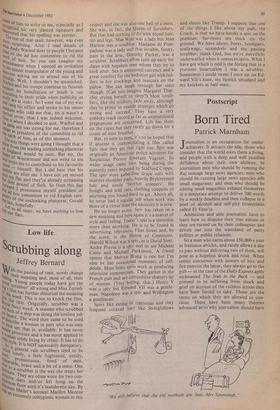 respect and she was also one hell of a mess. She was, in fact, the Queen of Scrubbers. But that had nothing to do with blond hair, tits and legs. Mae West was a lady but Jean Harlow was a scrubber. Madame de Pom- padour was a lady and that lovable, funny, pain in the arse, Dorothy Parker, was a scrubber. Scrubbers often turn up early for dates with hopeless men whom they try to look after. Sex is emotional currency and a great comfort for the bedsitter girl with lad- ders in her stockings and mascara on the pillow. She can laugh . through her tears though. (Can you imagine Margaret That- cher crying herself to sleep?) Most scrub- bers, like old soldiers, fade away, although they're prone to suicide attempts which go wrong and succeed. They have a very uniticky track record as far as unintentional pregnancies are concerned. Life has them on the ropes but they rarely go down for a count of nine breather..

But, to turn to men, it's to be hoped that if anyone is contemplating a film called Spiv that they get that right too. Spiv was originally an American police acronym for Suspicious Person Itinerant Vagrant. Its wider usage came into being during the austerity years imposed by Stafford Cripps. The spiv wore gaberdine drape suits with massive shoulder pads, heavily Brylcreemed hair and suede 'brothel creepers'. He bought and sold cars, clothing coupons or anything you found hard to get. Above all, he never had a regular Job when work was More of a virtue than the necessity it is now. He no longer exists. Spiv has taken on a new meaning and here again it's a matter of style and feeling. Today's spiv is a smoothie more than anything. He is to be found in advertising, television, Fleet Street and, by the score, in the House of Commons. Harold Wilson was a spiv, as is David Steel. Andre Previn is a spiv and so are Michael Caine and Michael Parkinson. A friend opines that Melvyn Bragg is one but I'm sure he has occasional moments of self- doubt. Most Soho spivs work at producing television commercials. They gather in the French pub and are compulsive chatters-up of women. (Very boring, that.) Henry V was a spiv but Edward VII was a gentle- man. Napoleon was a spiv and Wellington

a gentleman. Spivs like eating in trattorias and they frequent cocktail bars like Stringfellows. and discos like Tramp. I suppose that one of the things I like about my pub, the Coach, is that we have hardly a spiv on the premises. Survivors are thick on the ground. We have idiots, bores, hooligans, scallywags, scoundrels and the passing scrubber, thank God, but we're mercifully understaffed when it comes to spivs. What I have got which is odd is the feeling that in a previous incarnation I was a scrubber. Sometimes I could swear I once sat on Ed- ward VIPs knee, my lipstick smudged and my knickers at half mast.