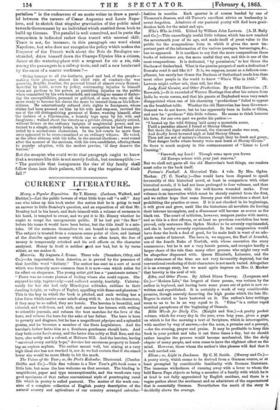 H. Bally and Co.)—This exceedingly useful little volume, which has now reached the seventeenth year of its age, and made itself of great value to the public for the compendious form in which it gives tho most im- portant part of the information of the various peerages, baronetages, ttcc., has re-appeared. It is needless to say that the more compendious these books of reference are, the more useful they are, and this is one of the most compendious. It is dedicated, " by permission," to her Grace the Duchess of Sutherland. What is the precise purport of such a dedication ? Does she read it and like it ? It is, we suppose, meant as a delicate com- pliment, but surely her Grace the Duchess of Sutherland needs less than most other people in the world to know "Who's Who in 1865." Mr. Lawson might rather ask, than tell, her that.