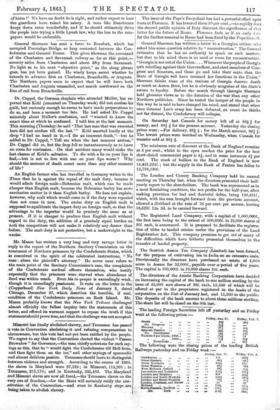 Dr. Cappel, the German chaplain who attended Mailer, has "re-

ported that Kiihl (executed on Thursdarweek) did not confess his guilt, but curiously enough he seems to have 'made preparations to do so, and been a moment too late. He had asked Dr. Cappel minutely about Miiller's confession, and "wanted to know the exact time at which he confessed. I told him at the last moment. This morning (Thursday) he said ' That last man that was executed here did not confess till the last." Kohl asserted loudly at the drop "I had no hand in it,—I die an innocent death;"-=bat he added to Dr. Cappel, " Tell me when the last moment arrives." Dr..Cappel did so, but the drop fell so instantaneously as to leave no room.for confession. On that accident many would stake the last chance of Kohl's salvation. To die with a lie on your lips is bad,—but is not to live with one on your lips worse ? Why should the moment of death count more than any other moment .of life?