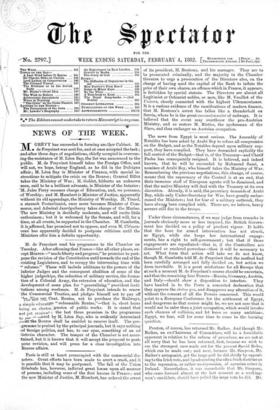 Page 1, 4 February 1882 — Under these circumstances, if we may judge from remarks in
Close

Under these circumstances, if we may judge from remarks in

journals obviously more or less inspired, the British Govern- ment has decided on a policy of prudent vigour. It holds that the hour for armed intervention has not struck, as Egypt, while she keeps her international engage- ments, has a right to self-government ; but that if those engagements are repudiated—that is, if the Controllers are dismissed or rendered powerless—then it will be necessary to act. What form that action will take• we do not know, though M. Gambetta told M. de Freycinet that the method had been carefully arranged and fully decided on, but action we deem inevitable. It is a great misfortune for all Europe that at such a moment M. de Freycinet's course should be uncertain, and that the remaining four Powers—Russia, Germany, Austria, and Italy—should show a disposition to interfere. They have handed in to the Porte a concerted declaration that they approve the status quo, and disapprove any alteration of it, without the consent of all the Powers concerned. This would point to a European Conference for the settlement of Egypt,. and dangerous as that course might be, we are not sure that it would not be safer than a joint occupation, which would involve such chances of collision, and let loose so many ambitions. Egypt, we fear, will for some time to come be the burning question.