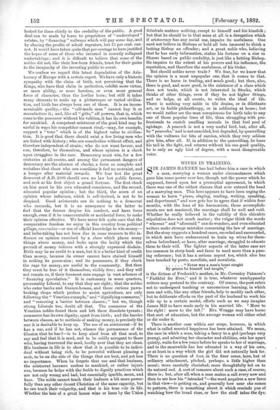 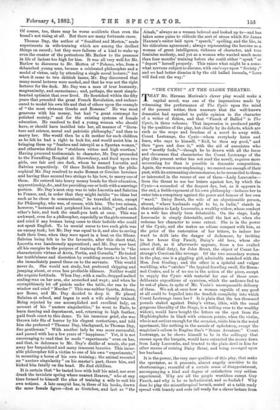 SIR JAMES HANNEN has had before him a case in which a man, marrying a woman under circumstances which gave him some power over her, though not the power which he supposed, forced upon her a prenuptial agreement, in which there was one of the oddest clauses that ever entered the head of a marrying man. This hero appears to have been urging the woman to learn "piano, singing, reading, writing, speaking, and deportment," and now gets her to agree that if within four months, with the loan of his harmonium, those accomplish- ments are not mastered, the marriage shall be null and void. Whether he really believed in the validity of this chivalric stipulation does not much matter ; the vulgar think the words " whereas " and " aforesaid " can do wonders, and even educated writers make strange mistakes concerning the law of marriage. But the story suggests a hundred cases, recorded and unrecorded, in which men have endeavoured to train up wives for them- selves beforehand, or have, after marriage, struggled to educate them to their wilL The lighter aspects of the latter case are too common in story-book and farce to need more than a pass- ing reference ; but it has a serious aspect too, which also has been touched by poets, novelists, and moralists.

"Never was a man's heart caught By graces he himself had taught," is the dictum of Frederick's mother, in Mr. Coventry Patmore's "Faithful for Ever," and it is true, whatever nambypamby writers may pretend to the contrary. Of course, the poet refers not to undesigned teaching or unconscious learning, in which man and wife, like any other friends, help to modify each other, but to deliberate efforts on the part of the husband to work his wife up to a certain model, efforts such as we may imagine James Mill to have made early in his married life. "More to the right ! more to the left !" Mrs. Wragge may have borne that sort of education, but the average woman will either rebel or die under it.

There is another case within our scope, however, in which what is called married happiness has been attained. We mean, the case in which a man, taking a fancy to a girl (perhaps very young), and admiring her character and abilities, sets her apart quietly, waits for a few years before he speaks to her of marriage, and in the meanwhile has her educated in a way of his own, or at least in a way which the girl did not naturally look for. There is no question of love, in the finer sense, here, but of ordinary attachment, pitched, perhaps, a little higher than

usual; More carefully cherished, more thoughtfully led on to its natural end. A sort of romance about such a case, of course, there is; but, after all, when a man makes a call every now and then to see how his "intended "—the word acquires a new force in that view—is getting on, and generally how near she comes to pattern, there is something about it which reminds you of watching how the bread rises, or how the stuff takes the dye.

Of coarse, too, there may be worse accidents than even the bread's not rising at all. But there are many fortunate cases.

Thomas Day, the author of "Sandford and Merton," made experiments in wife-training which are among the drollest things on record ; but they were failures of a kind to wake up even the creator of the portentous Mr. Barlow to the presence in life of factors too high for him. It was all very well for Mr. Barlow to discourse to Mr. Merton of " Polemo, who, from a debauched young man, became a celebrated philosopher and a model of virtue, only by attending a single moral lecture ;" but when it came to two skittish lasses, Mr. Day discovered that many moral lectures were needed, and that he was not the right lecturer for the desk. Mr. Day was a man of true humanity, magnanimity, and earnestness ; and, perhaps, the most simple. hearted optimist that ever lived. He flourished within the fifty years that preceded the great French Revolution, and endeav- .oured to model his own life and that of others upon the example of "the most virtuous Greeks and Romans." He was most generous with his money, but had "a great contempt for polished society," and for the existing systems of female education. He resolved to find a young. woman who should have, or should have instilled into her, all manner of "litera- ture and science, moral and patriotic philosophy," and then to marry her. She would then be a fit mother for such children as he felt he had a right to look for, and would assist him in bringing them up "fearless and intrepid as a Spartan woman," and otherwise fitted for "stubborn virtue and, high exertion.' Having procured testimonials to character, Mr. Day proceeded to the Foundling Hospital at Shrewsbury, and fixed upon two girls, one fair and one dark, whom he named Lucretia and Sabrina respectively. Of these British foundlings the philo- sophical Mr. Day resolved to make Roman or Grecian heroines and having thus secured two strings to his bow, to marry one of them. He entered into heavy money bonds for their education, apprenticeship, &c., and for providing one or both with a marriage portion. Mr. Day's next step was to take Lucretia and Sabrina to France, and, in order that they might imbibe "no ideas but such as he chose to communicate," he travelled alone, except for Philosophy, who was, of course, with him. The two misses, however, "harassed and perplexed him not a little," pulled each ether's hair, and took the small-pox both at once. This was awkward, even for a philosopher, especially as the girls screamed and cried if any human being came to their bedside who could not speak English. To be menial nurse to two such girls was an uneasy task; but Mr. Day was equal to it, and also to saving both their lives, when they were upset in a boat on the Rhone. Sabrina being felt to be the favourite, after this short trial, Lucretia was handsomely apprenticed ; and Mr. Day now bent all his energies to the purpose of training the brunette in "the characteristic virtues of Arria, Portia, and Cornelia." He tested her truthfulness and discretion by confiding secrets to her, but she immediately passed these on to the servants. This would never do. She would not study, but preferred skipping and jumping about, or even less profitable idleness. Neither would .she acquire fortitude. When Day, with a smile, dropped melted sealing-wax on her arm, she screeched and wept ; and when he surreptitiously let off pistols under the table, she ran to the window and cried "Murder !" This was neither Sparta, Athens, nor Rome, and Mr. Day decided to drop it. He placed Sabrina at school, and began to seek a wife already trained. Being rejected by one accomplished and excellent lady, on account of his "austere singularities," he went to Paris, to learn dancing and deportment, and, returning in high feather, paid fresh court to this dame. To his immense grief, she was thrown into fits of horror by his elegant contortions, and told him she preferred "Thomas Day, blackguard, to Thomas Day, fine gentleman." With another lady he was more successful, and passed with her a few years of "happiness." Yet, it is not encouraging to read that he made " experiments " even on her, and that, in deference to Mr. Day's dislike of music, she put away her harpsichord and many innocent luxuries. This incur- able philosopher fell a victim to one of his own "experiments," in mounting a horse of his own training ; the animal resented an"austere singularity" on his master's part, threw him, and kicked him fatally on the head. He died childless.

It is certain that "he tasted love with half his mind, nor ever drank the inviolate spring where nearest Heaven," who at any time formed to himself the plan of training a wife to suit his own notions. A late essayist has, in three of his books, drawn the same female figure—first as Gretchen, and last as "the Ainah," always as a woman beloved and looked up to—and has taken some pains to ridicule the sort of stress which Sir James Hannen's suitor laid upon "speech," spelling, and the like, in his ridiculous agreement ; always representing the heroine as a. woman of great intelligence, richness of character, and true feminine modesty, and yet as a woman who wanted much more than four months' training before she could either "speak " or " deport " herself properly. This raises what might be a some- what nervous subject to discuss, with one's eye upon "Society ;" and we had better dismiss it by the old ballad formula, "Love will find out the way."