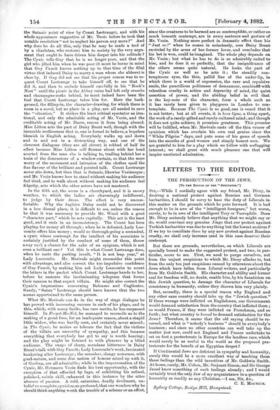 THE PERSECUTION OF THE JEWS. [To THE EDITOR OF TIIR " SPECTATOR:] SIR,—While I cordially agree with my friend, Mr. Dicey, in desiring a national protest against Russian and German. barbarities, I should be sorry to base the duty of Liberals in this matter on the grounds which he puts forward. It is bad enough to be in awe of the "intelligent foreigner," but worse,. surely, to be in awe of the intelligent Tory or Turcophile. Does Mr. Dicey seriously believe that anything that we might say or .do, would convince any genuine Jingo that our protest against. Turkish barbarities was due to anything but the lowest motives P. If we try to conciliate them by any new protest against Russian, cruelty, we shall only increase (and in this case deserve) their contempt.

But there are grounds, nevertheless, on which Liberals are- specially bound to make the suggested protest, and two, in par- ticular, occur to me. First, we need to purge ourselves, not from the unjust suspicions to which Mr. Dicey alludes to, but from the only too just suspicions caused by utterances about the- Jews which have fallen from Liberal writers, and particularly from Mr. Goklwin Smith. His character and ability and former zeal for freedom will, no doubt, enable him, by his fanaticism on, this Jewish question, to damage the character of Liberals for- consistency in humanity, unless they disown him very plainly.

But, secondly, there is a special reason why England an& any other sane country should take up the "Jewish question.' If these wrongs were inflicted on Englishmen, our Government. would demand satisfaction from the country that inflicted them ;. so would France, if they were inflicted on Frenchmen, and so- forth ; but what country is bound to demand satisfaction for the Jews ? Therefore, it seems that the old saying should be re- versed, and what is "nobody's business" should be everybody's business ; and since no other countries can well take up the matter just now, could not England and France undertake to set on foot a protectorate in Europe for the landless race, which would surely be as useful to the world as the proposed pro- tectorate for the benefit of an Egyptian despot?

If Continental Jews are deficient in sympathy and humanity, =rely this would be a more excellent way of teaching them those feelings than the wild invectives of Mr. Goldwin. Smith. At home, surely, Mr. Cohen, Mr. Serjeant Simon, and Sir George Jessel know something of such feelings already, and I would certainly trust the only Jew of my acquaintance in a question of humanity as readily as any Christian.—I am, Sir, &e.,