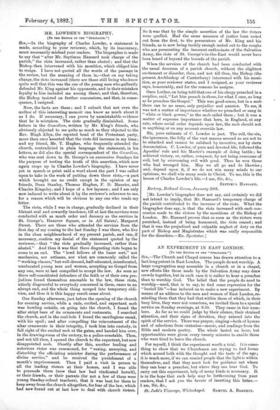 go THE Barron OP THE " SPECTATOR.1 SIR,—In the biography of Charles Lowder, a statement is made, according to your reviewer, which, by its inaccuracy, must necessarily mislead your readers. The biographer is made -to say that "after Mr. Septimus Hansard took charge of the parish," the riots increased, rather than abated ; and that the Bishop then intervened with his monition, which obliged him to resign. I have not quoted all the -words of the passage in the review, but the meaning of them is,—that on my taking -charge, the riots increased (there are those still living who know -quite well that this was the cue of the young men who gallantly defended Mr. King against his opponents, and in their mistaken loyalty to him included me among them), and that, therefore,

the Bishop insisted on further concessions, and that, in conse- quence, I resigned.

Now, the facts are these ; and I submit that not even the author of this interesting memoir can know as much about it as I do. If necessary, I can prove by unmistakable evidence that he is mistaken. The riots gradually diminished. Some letters in the Guardian, written by Mr. King's friends, who -obviously objected to me quite as much as they objected to the Rev. Hugh Allen, the reputed head of the Protestant party, more than once asserted that the riots did increase in my time; and my friend, Mr. T. Hughes, who frequently attended the -church, contradicted in plain language the statement, in his letters, as did also the special correspondent of the Guardian, who was sent down to St. George's on successive Sundays for -the purpose of testing the truth of this assertion, which now again crops up in Charles Lowder's biography. I have never yet in speech or print said a word about the part I was called upon to take in the work of putting down these riots,—a part

which brought me no credit except in the opinion of my friends, Dean Stanley, Thomas Hughes, F. D. Maurice, and Charles Kingsley, and I hope of a few laymen ; and I am only now induced to write about it by the reviewer's reference to me, for a reason which will be obvious to any one who reads my letter.

The riots, while I was in charge, gradually declined in their

blatant zeal and cowardly insolence, till at last the services were -conducted with as much order and decency as the services in St. George's, Hanover Square, or in All Saints', Margaret Street. There are those who attended the services from the first day of my coming to the last Sunday I was there, who live in the close neighbourhood of my present parish, and can, if necessary, confirm my denial of the statement quoted by the reviewer,—that "the riots gradually increased, rather than abated." And thus it was that these disgusting riots began to 'come to an end. The "lewd fellows of the baser sort," not mechanics, nor artisans, nor what are commonly called the -" working-classes," but well-dressed, half-educated, miseducated, uneducated young men and women, accepting no Gospel from any One, were at last compelled to accept the law. As soon as these self-constituted defenders of the faith or of their own pre- judices found themselves amenable to the law, these riots, utterly disgraceful to everybody concerned in them, came to an abrupt end, and the whole thing merged into temporary obli- -vion, and thus it is this happy result came about.

One Sunday afternoon, just before the opening of the church for evening service, while a rude, excited, and expectant mob was howling outside, on going into the church, I found the altar stript bare of its ornaments and vestments. I searched the church, and in the coal-hole I found the sacrilegious sneak, with his spoil ; and after compelling the reinvestment of the altar ornaments in their integrity, I took him into custody, in full sight of the excited mob at the gates, and handed him over, in the drawing-room of the rectory, to a police-constable. Then, and not till then, I opened the church to the expectant, but now disappointed mob. Shortly after this, another leading and notorious rioter was summoned, for "vexing, annoying, and disturbing the officiating minister during the performance of divine service," and he received the punishment of a month's imprisonment. Then I paid a visit in person to all the leading rioters at their homes, and I was able to persuade them (now that law had vindicated herself), or their friends, or their parents (for not a few of them were young Sunday-school teachers), that it was best for them to keep away from the church altogether, for fear of the law, which had sow found out at last how to deal with church rioters. So it was that by the simple assertion of the law the rioters were quelled. Had the same measure of justice been meted out from the first, to the persecutors of Mr. King and his friends, as is now being tardily enough meted out to the roughs who are persecuting the innocent enthusiasts of the Salvation Army, the riots of St. George's-in-the-East would never have been heard of beyond the bounds of the parish.

When the services of the church had been conducted with the usual decorum of a parish church, without the slightest excitement or disorder, then, and not till then, the Bishop (the present Archbishop of Canterbury) intervened wit'h his moni- tion, as your reviewer states, and I resigned, as your reviewer says, honourably, and for the reasons he assigns.

Once Luther, on being told that one of his clergy preached in a surplice, said," Let him preach in three, for what I care, as long as he preaches the Gospel." This was good-sense, but in a mob there can be no sense, only prejudice and passion. To me, it was not a matter of importance whether we preached or sang in "white or black gowns," as the mob called them ; but it was a matter of supreme importance that here, in England, at any rate, where social order depends upon law, the mob should not in anything or on any account override law.

Sir, your estimate of C. Lowder is just. The evil, the sin, the ignorance, the folly of the vast masses around us are not to be attacked and cannot be subdued by invective, nor by stern denunciation. C. Lowder, of pure and devoted life, followed the Apostles' rule and his Master's example of doing battle ; he achieved victory, or, rather, conquest, by not being overcome of evil, but by overcoming evil with good. Thus he won those who had wronged him. May we all go and do likewise ; and, depend upon, it, if we do not win many minds to our opinions, we 8411 win many souls to Christ. To me, this is the lesson of Charles Lowder's life.—I am, Sir, &c., SEPTIMUS HANSJUID. _Rectory, Bethnal Green, January 29th.

[Mr. Lowder's biographer does not say, and certainly we did not intend to imply, that Mr. Hansard's temporary charge of the parish contributed to the increase of the riots. What the biographer does say, is that the riots increased with each con- cession made to the rioters by the monitions of the Bishop of London. Mr. Hansard proves that so soon as the rioters were punished, instead of being humoured, the riots ceased ; and that it was the prejudiced and culpable neglect of duty on the part of Bishop and Magistrates which was really responsible for the disorders.—ED. Spectator.]