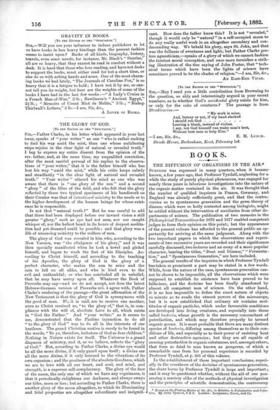 THE GLORY OF GOD.

[To THE EDITOR OF THE "SPECTATOR."] SIR,—Father Clarke, in his letter which appeared in your last issue, speaks of "your writer" as one "who is rather seeking to .find his way amid the mist, than one whose unfaltering steps rejoice in the clear light of natural or revealed truth." I beg to express my entire dissent from the opinion of the rev, father, and, at the same time, my unqualified conviction, after the most careful perusal of his replies to the observa- tions of "your writer," that it is the father himself who has lost his way "amid the mist," while his critic keeps calmly and steadfastly " in the clear light of natural and revealed truth." "Your writer" uttered his mind as one who was aware that there is "one glory of the sun" and a second " glory " of the lilies of the field, and who felt that the glory reflected by these two typical specimens of his handiwork on their Creator was that of intentional ministry to the needs or to the higher development of the human beings for whose exist- ence he is responsible.

Is not that "natural truth P" But he was careful to add that there had been displayed before our inward vision a still greater "glory," such as eye had not seen, nor ear caught whisper of, nor the holiest heart in its hours of deepest medita- tion had yet dreamed could be possible ; and that glory was a life of unceasing ministry to the welfare of men.

The glory of God was revealed in him who, according to the New Version, was "the effulgence of his glory," and it was then specially manifested when he took a towel and girded himself, and began to wash the feet of his Disciples. Ac- cording to Christ himself, and according to the teaching of his Apostles, the glory of God is the glory of a perfect character, who makes the sun to arise and the rain to fall on all alike, and who is kind even to the evil and unthankful; or who has concluded all in unbelief, that he may have mercy upon all. Whatever the Book of Proverbs may say—and we do not accept, nor does the latest Hebrew-German version of Proverbs xvi. 4 agree with, Father Clarke's rendering of the passage—the great affirmation of the New Testament is that the glory of God is synonymous with the good of man. We, it is said, are to receive one another, even as Christ received us, "to the glory of," that is, in com- pliance with the will of, absolute Love to all, which exists in "God the Father." And "your writer," as it seems to me, demonstrated that the Pauline injunction to do all "to the glory of God" was to do all in the interests of our brethren. The grand Christian motive is surely to be found in the words, "Be ye, therefore, imitators of God as dear children." Nothing in Nature exists for itself. The Universe is a grand diapason of ministry, and it, as we believe, reflects the "glory of God." But, according to Father Clarke, a divine eye would be all the more divine, if it only gazed upon itself; a divine ear all the more divine, if it only listened to the vibrations of its own organism ; and the goodness of the absolute Goodness, which we are to love with all our heart, and soul, and mind, and strength, is a supreme self-complacency. The glory of the face of the moon, the only one of which we have any cognisance, is that it periodically enlightens our darkness, and always sways our tides, more or less; but According to Father Clarke, there is another glory of the moon altogether, to which its illuminating and tidal properties are altogether subordinate and insignifi- cant. How does the father know this ? It is not "revealed," though it would only be " natural " in a self-occupied moon to do any really useful work in an altogether secondary and con- descending way. We beheld his glory, says St. John, and that. was the fullness of sweetness and light; but Father Clarke pre- fers agnosticism,—speaks of a glory of which we cannot fashion the faintest moral conception, and once more furnishes a strik- ing illustration of the fine saying of John Foster, that "tech- nical terms which have been the lights of science have sometimes proved to be the shades of religion."-1 am, Sir, &c.,