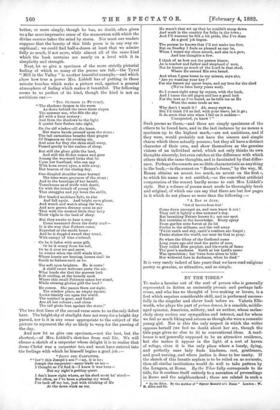 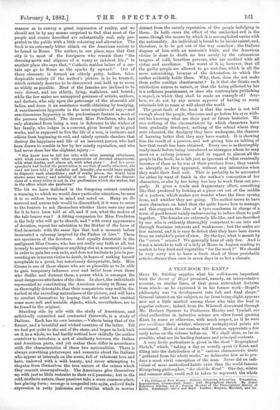 To make a heroine out of the sort of person who is generally represented in fiction as eminently prosaic and perhaps ludi- crous, and who has no thought of love-making or lovers, is a feat which requires considerable skill, and is performed success- fully in the singular and clever book before us. Valeria Ells- worth, who plays the part of prima donna, is a sensible, middle- aged spinster, American, solitary, and an author, whose melan- choly story excites our sympathies and interest, and for whom we feel as much liking and esteem as though she were a romantic young girl. Nor is this the only respect in which the writer opposes herself (we feel no doubt about her sex, though the title-page gives no clue to it) to conventional ideris. A mad- house is not:generally supposed to be an attractive residence, but she makes it appear in the light of a sort of haven of refuge, since it is the only place where a lonely, dying, and perfectly sane lady finds kindness, rest, gentleness, and good nursing, and where justice is done to her sanity. If the sketch of this lunatic asylum is to be relied on as accurate, then all similar institutions would do well to take pattern by the Lungara, at Rome. By the Tiber fully corresponds to its title, for it confines itself entirely to a narration of proceedings in Rome and the neighbourhood ; these are related in such a • By the Tiber. By the Author of " Signor Monald ni'a Niece." London : W. H. Allen and Co.

manner as to convey a great impression of reality, and we should not be by any means surprised to find that most of the people and events described are substantially real, only pre- rented to the public with a little colouring and alteration. The book is an extremely bitter attack on the American society to be found in Rome. The author, in one place, says that that

city is to most of the foreigners who remain there "the dressing-gown and slippers of a weary or indolent life ;" in another place she says that, " Catholic maiden ladies of a cer- tain age go to Rome as the sparks fly upward." Out of these elements is formed an utterly petty, hollow, false, despicable society (if the author's picture is to be trusted), which certainly deserves to be denounced and held up to scorn as widely as possible. Most of the females are inclined to be very devout, and are elderly, lying, malicious, and horrid ; while the few males are uninspired geniuses of artists, authors, and doctors, who rely upon the patronage of the aforesaid old ladies, and deem it an assistance worth obtaining by toadying. A sanctimonious hypocrite is the most repulsive of any,—and sanctimonious hypocrisy is the predominant feature in most of the persons depicted. The devout Miss Pendleton, who had only abstained from being a nun in deference to the wishes of her family, who lodges in a convent, gives herself up to good works, and is supposed to live the life of a nun, is insincere and odious from beginning to end, and calmly spreads slanders that destroy the happiness and life of an innocent person who had

been drawn to confide in her by her saintly reputation, and who had never done her the slightest injury

She knew how to tell her tale, with what seeming reluctance, with what excuses, with what expressions of devoted attachment, with what doubts, and above all, with what piety ! And her corre- spondents had lacked the penetration to see that, if really reluctant, she need not have told ; if doubtful and friendly, she would have sought to disprove such absurdities ; and if really pious, she would have shown some mercy and nobility of soul. The proof of the disposi- tions of a story-teller is not in the professions which she makes, but in the effect which she produces."

The bit we have italicised in the foregoing -extract contains at warning to which we would draw particular attention, because it is so seldom borne in mind and acted on. Many an ill- natured and untrue tale would be discredited, if it were to occur to the hearers to ask themselves whether there were any need for it to have been told at all, and if not, what the motive of the tale-bearer was ? A fitting companion for Miss Pendleton is the lady who will go to church, and "with every appearance

of devotion, repeat her salutation to the Mother of the Love of -God incarnate with the same lips that had a moment before insinuated a calumny inspired by the Father of Lies." These are specimens of the devotees. And equally detestable is the malignant Miss Cromo, who has not really any faith at all, but is ready to assume religion or anything else at a moment's notice in order to gain her own ends, and does not hesitate to join in per- secuting an innocent victim to death, in hopes of making herself

-acceptable to a great, but notoriously disreputable, lady. Miss Cromo is one of those shams who are so plausible as to be able to gain temporary influence over and belief from even those who dislike and distrust them, a power which is amongst the most dangerous attributes of the class. In short, the individuals represented as constituting the American society at Rome are so thoroughly detestable, that their compatriots may well be dis- turbed at the exceeding naturalness of the picture, and will have to comfort themselves by hoping that the artist has omitted some more soft and amiable objects, which, nevertheless, are to be found in the original.

Standing side by side with the study of Americans, and artistically connected and contrasted therewith, is a study of Italians. Each has its own heroine,—Valeria being that of the former, and a beautiful and wicked countess of the latter. Till we had got quite to the end of the story, and began to look back on it as a whole, we had hardly noticed how skilfully the author

-contrives to introduce a sort of similarity between the Italian and American parts, and yet makes them differ in accordance with the characteristics of those two nationalities. There is -always something picturesque and romantic about the Italians who appear at intervals on the scene, full of vehement love and hate, endowed with a wild beauty, and never attempting to disguise from themselves the true nature of the crimes which they commit unscrupulously. The Americans give themselves rap with just as little restraint to their evil passions; but in the cold, northern nature, these passions take a more common-place, less glaring form; revenge is congealed into spite, and evil finds

'expression in petty jealousies and rivalries which in nowise detract from the saintly reputation of the people indulging in them. In both cases the effect of the unchecked evil is the same, though the means by which it is accomplished varies with the nationality. An individual is found to be inconvenient, and, therefore, is to be got out of the way somehow; the Italians dispose of him with an assassin's knife, and the American victim is done to death no less surely by the calumnious tongues of cold, heartless persons, who are credited with all virtue and excellence. The worst of it is, however, that all the guilty people are allowed to go scot-free, which is all the more astonishing, because of the detestation in which the author evidently holds them. Why, then, does she not make them suffer condign chastisement? Is it that she thinks such retribution untrue to nature, or that the being pilloried by her is a sufficient punishment, or does she contemplate publishing a sequel, in which they shall be made an example of? Any- how, we do not by any means approve of having so many criminals left to roam at will about the world.

The great fault of the book is that the reader is not told enough about the people, who come and go before his eyes with- out his knowing what are their past or future histories. He sees nothing of the circumstances by which characters have been gradually developed, nothing of the school where they were educated, the drudgery they have undergone, the chances of learning better that they may have wasted. It is showing him the result of a process, and not giving him an inkling of how that result has been obtained. Every one is as thoroughly ready-made before being introduced as strangers whom he may meet on a railway journey. And in regard to almost all the people in the book, he is left just as ignorant of what eventually becomes of them as he was of their previous lives; they vanish as abruptly as they appeared, without any intimation when they make their final exit. This is probably to be accounted for either by want of finish in the author's conception of her characters, or else by her being too lazy to work them out pro- perly. It gives a crude and fragmentary effect, something like that produced by looking at a piece cut out of the middle of a pattern, which makes you wonder where the lines sprang from, and whither they are going. The author seems to have more characters on hand than she quite knows how to manage, and this suggests the idea of a tyro coachman in charge of a team of good horses vainly endeavouring to induce them to pull together. The females are extremely life-like, and are described by one who is evidently thoroughly competent to see into and through feminine interests and weaknesses ; but the males are less natural, and it is easy to detect that they have been drawn from an outsider's point of view. By-the-bye, what is meant by the " seven " senses ? We generally hear of only five. And is it not a mistake to talk of a lady at Rome in August sending to market to buy fruit and vegetables "for the week ?" We should be very sorry not to have a fresh stock of those perishable articles oftener than once in seven days in so hot a climate.