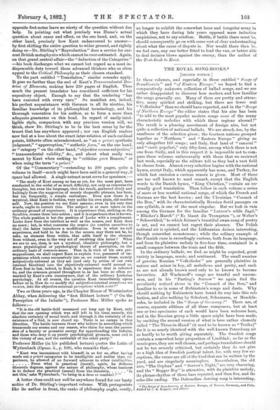 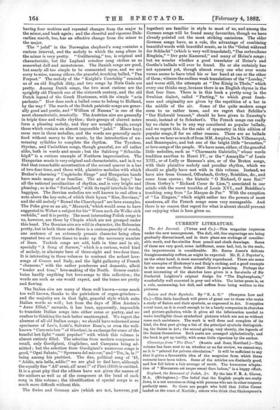 In these volumes, and especially in those entitled" Songs of Scandinavia" and "of Eastern Europe," we hoped to find a comparatively unknown collection of ballad songs, and we are rather disappointed to discover how modern and how familiar the songs generally are. Many of them are pretty and attrac- tive, many spirited and striking, but there are fewer real " Volkslieder " than we should have expected, and in the "Songs of Northern Europe" the editor states that his aim has been "to add to the most popular modern songs some of the many characteristic melodies with which these regions abound !" The result is a pleasing assortment of foreign airs, but not quite a collection.of national ballads. We are struck, too, by the smallness of the selection given ; the fourteen nations grouped together as "Northern " and "Eastern Europe" giving us only altogether 183 songs ; and Italy, that land of " canzoni " and "cacti popolari," only fifty-four, among which there is not one from Sicily, and in this respect it is impossible not to com- pare these volumes unfavourably with those that we reviewed fast week, especially as the editors tell us they had a vast field to choose from. Almost every selection begins with the national hymn, except Italy, which apparently has none, and Turkey, for which last omission a curious reason is given. Moat of these are too well known to need remark, except that the English words to the Danish hymn, "King Christian," contain an un- usually good translation. Then follow in each volume a series of more or less martial national songs, of which the French and German are the best known ; and the Ukrainian "Cossack of the Don," with its characteristically Russian florid passages on one syllable, is one of the most singular. But we look in vain among the German for the familiar " Lutzow's wilde Jagd," " Bliicher's March" (" Es blaset die Trompeten "), or Weber's " Schwertlied," to which Korner's beautiful swan-song of poetry is set, and we cannot but regret their absence. The Polish national air is spirited, and the Lithuanian dainos interesting, though somewhat monotonous ; while the solitary example of the Finnish rune is exceedingly curious, both from its language, and from its plaintive melody in five-four time, contained in a small compass between the tonic and the fifth.

In the ordinary ballads, we find, as might be expected, great variety in language, music, and sentiment. The small number of genuine Russian " Volkslieder " are generally plaintive in nature and minor in key, all melodious and pretty, and such as are not already known need only to be known to become favourites. All Warlamoff's songs are tuneful and uncom- mon, and in his "Parting's Sorrow" we again find the peculiarity noticed above in the "Cossack of the Don," and familiar to us in some of Rubinstein's songs and duets. Why should nothing by Rubinstein have found its way into this col- lection, and also nothing by Schubert, Schumann, or Mendels- sohn, be included in the "Songs of Germany ?" There are, of course, separate editions of all these composers, but at least one or two specimens of each would have been welcome here, and in the Russian group a little space might have been made, by omitting the second version of what is here rather clumsily called "The Three-in-Hand" (it used to be known as "Troika)" for it is so nearly identical with the well-known Petersburg air

as hardly to be worth giving separately. The Swedish songs contain a somewhat large proportion of Lindblad ; as far as the music goes, they are well chosen, and perhaps translations should not be too severely criticised, but certainly they do not give us a high idea of Swedish poetical talent, for, with very few ex- ceptions, the verses are all of the kind that can be written by the

yard, and are singularly meaningless. Nevertheless, the old airs, "The Orphan" and "Sorrow's Night," are very charming,

and the" Beggar Boy" is attractive, with its plaintive melody, its phrase-rhythm of three bars repeated, and then five, and its echo-like ending. The Dalecarlian dancing song is interesting,

• The Songs of Scandinavia, of Eastern Europe, of France, Germany, and Daly. Edited by J. A. Kappey, and others.

having four motives and repeated changes from the major to the minor, and back again; and the cheerful and vigorous Dale- carlian march, too, has an effective change from the minor to the major.

The " jodel" in the Norwegian shepherd's song contains a curious interval, and the melody to which the song alters in the minor is very pretty. " Guldterning," too, is original and characteristic, but the Lapland reindeer song strikes us as somewhat dull and monotonous. The Danish songs are good, but nearly all too simple to be commented upon, and we are sorry to miss, among others, the graceful, touching ballad, " Paa Forpost." The melody of the "Knight's Courtship" reminds us of an old English ditty, and two songs by Niels Gade are pretty. Among Dutch songs, the two most curious are the sprightly old Flemish one of the sixteenth century, and the old Dutch legend of the Greek Huntsman, with its simple "aria parlante." How does such a ballad come to belong to Holland, by the way ? The words of the Dutch patriotic songs are gener- ally good and poetic, and "William of Nassau" is one of the most characteristic, musically. The Austrian airs are generally in triple time and waltz rhythm ; their groups of slurred notes form a pleasing melody, and they are usually simple, except those which contain an almost impossible " jodel." Minor keys seem rare in these melodies, and the words are generally sacri- ficed without mercy to the music, by the introduction of un- meaning syllables to complete the rhythm. The Tyrolese, Styrian, and Carinthian songs, though graceful, are all rather alike, both in words and music ; but the Salzburg " Schnoda- h5pfl" is a curious example of Northern improvisation. The Hungarian music is very original and characteristic, and in it we find that remarkable accentuation of the second quaver in a bar of two-four time, and those wild, plaintive melodies with which Brahm's charming " Ungarische Singe" and Hungarian bands have made many of us familiar. The air "Gaily, boys," has all the national peculiarities of rhythm, and is very bright and pleasing; so is the "Swineherd," with its rapid interlude for the bagpipes. The Servian melodies are well known to end often a note above the key-note, of which their hymn "Rise, Servians," and the old melody " Round the Churchyard" are here examples. The Poles give us an air, " Ma.zurek,"which would seem to have suggested to Weber a subject for his" Wenn auch die Wolke sich verhiille," and it is pretty. The most interesting Polish songs to us, however, are those by Chopin which are not grouped under this head. The Bosnian airs are wild in character, the Bohemian pretty, but in both these sets there is a curious paucity of words, one sentence of an extremely prosaic character being often repeated two or three times to make up the necessary number of lines. Turkish songs are odd, both in time and in air, specially "A Song of Sorrow," which is a curious, weird kind of melody, in alternate bars of three-eight and two-four time. It is interesting in these volumes to contrast the ardent love- songs of Greece and Italy, and the light gallantry of French "chansons," with the rather ponderous and domestic, albeit "tender and true," love-making of the North. Greece contri- butes hardly anything but love-songs to this collection ; the words are such as one would expect, and the tunes are pretty and flowing.

The Italian airs are many of them well known—some much too well known, thanks to the patriotism of organ-grinders- and the majority are in that light, graceful style which suits Italian words so well ; but from the days of Miss Austen's "Anne Elliot," onwards, it has been, apparently, impossible to translate Italian songs into either sense or poetry, and we

confess to thinking the task better unattempted. We regret the absence of all old Italian songs ; we should have welcomed some

specimens of Leo's, Lotti's, Salvator Rosa's, or even the well- known "Caro mio ben" of Giordani, in exchange for some of the tuneful but light " canti popolari " with which this volume is almost entirely filled. The selection from modern composers is small, only Gordigiani, .Guglielmo, and Campana being ad- mitted; but the selection from Gordigiani's numerous songs is good," Ogni Sabato," " Speranza del mio eor," and" Tra, la, la !"

It is a great pity that the editors have not given the names of the authors as well as of the composers at the head of each song in this volume ; the identification of special songs is so much more difficult without this.

The Swiss and German airs (which are not, however, put

together) are familiar in style to most of us, and among the German songs will be found many favourites, though we have already pointed out the most striking omissions. The older German songs have, as a rule, the advantage of combining beautiful words with beautiful music, as in the "Gebet wahrencl der Schlacht" (which is very well translated), "Des zerbrochene Ringleio," "Der gute Kamerad," and many of Heine's songs ; but we wonder whether a good translator of Heine's and Goethe's ballads will ever be found. He or she certainly has not appeared yet, though almost every one who ever wrote verses seems to have tried his or her hand at one or the other of them; witness the endless weak translations of the "Loreley," and worse still, the attempts at "Der Konig in Thule," which every one thinks easy, because there is an English rhyme in the first four lines. There is in this book a pretty song in the Swabian dialect, called "Parting," to which great fresh- ness and originality are given by the repetition of a bar in the middle of the air. Some of the quite modern songs seem to us rather tame, and we regret that Schiller's "Der Eichwald brauset," should be here given to Zumsteg's music, instead of to Schubert's. The French songs can really lay no claim to be in any way considered as popular ballads, and we regret this, for the sake of symmetry in this edition of popular songs, if for no other reasons. There are no ballads such as we hear so mach of from MM. Ampere, De la Villemarque, and Beaurepaire, and but one of the bright little "brunettes," or love-songs of the people. We have none, either, of the graceful little melodies, such as " Charmante Gabrielle," whose words tradition ascribes to Henri IV., or the " Amaryllis " of Louis XIII., or of Lally or Ramean's airs, or of the Breton songs, with their plaintive melody and peculiar rhythm, which we should so gladly have met with in this volume. Instead, we have airs from Gonnod, Offenbach, Gretiy, Boieldieu, (tc., and. some from operas ; the historic "0 Richard, 0 mon Roi !" (from Gretry's "Richard Coeur de Lion,") associated in our minds with the worst troubles of Louis XVI., and Boieldiett's touching song from "Le Masque de Per." With the exception. of "La Zingara," which might rather tax the powers of most amateurs, all the French songs seem very manageable. And there is no reason that regret for what is absent should prevent our enjoying what is here given us.