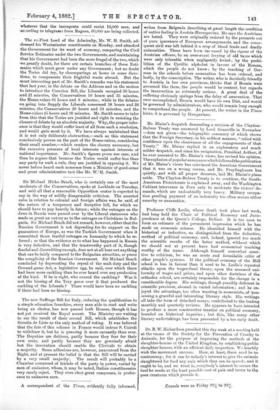 long held the Chair of Political Economy and Juris- prudence at the Queen's College, Belfast. It is too soon to form an estimate of the permanent impression which he has made on economic science. He identified himself with the historical or inductive, as distinguished from the deductive, method of political economy, and, indeed, ignored too much the scientific results of the latter method, without which we should not at present have had economical teaching worthy of the name. Although himself somewhat sensi- tive to criticism, he was an acute and formidable critic of other people's systems. If the political economy of the Mill school is less in favour than it used to be, Leslie's repeated attacks upon the wages-fund theory, upon the assumed uni- formity of wages and prices, and upon other doctrines of the orthodox school, are certainly responsible for the change in a considerable degree. His writings, though possibly deficient in scientific precision, abound in varied information ; and he en- joyed the advantage, too often wanting in economists, a 'pos- sessing a graceful and interesting literary style. His writings all take the form of detached essays, contributed to the leading monthly and quarterly reviews. He appears to have intended to produce a more constructive treatise on political economy, founded on historical inquiries ; but this, like many other literary undertakings, has been prevented by a too early death.