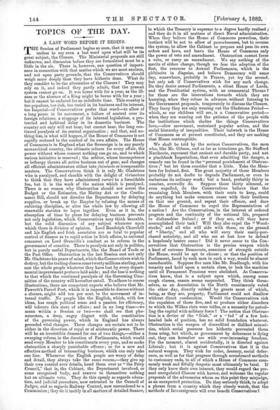 THE Session of Parliament begins so soon, that it may seem useless to say even a last word upon what will be its great subject, the Closure. The Ministerial proposals are stall unknown, and discussion before they are formulated must be a little in the air. There is, however, one question of import- ance in connection with that matter which we are most anxious, and not upon party grounds, that the Conservatives should weigh more deeply than they have hitherto done. What do they consider to be the alternative of the Closure ? They may rely on it, and indeed they partly admit, that the present system cannot go on. It was borne with for a year, as the ill- ness or the absence of a King might be borne with for a year ; but it cannot be endured for an indefinite time. This country is too populous, too rich, too varied in its business audits interest, too Imperial—if Conservatives prefer that word—to allow of a long pause in its movement, a failure of control over its foreign relations, a stoppage of its internal legislation, a pro- tracted, and habitual delay in its domestic business. The country not only will not bear, but cannot bear, the long con- tinued paralysis of its central organisation ; and that, and no- thing less, is what will happen, if the House of Commons is not rapidly restored to the control of its own affairs. The House of Commons is in England what the Sovereign is in any purely monarchical country, the ultimate referee for every affair, the power without whose consent nothing can go on, and to which' serious initiative is reserved ; the arbiter, whose incompetence or lethargy throws all active business out of gear, and changes all efficient administrators either into faineants or irresponsible masters. The Conservatives think it is only Mr. Gladstone who is paralysed, and chuckle with the delight of vivisectors to think that. they have administered curari to a formidable foe, but it is the work of the nation which is paralysed. There is no reason why Obstruction should not arrest the Budget or the Estimates, the Mutiny Act or the Contin- uance Bill, should not dissolve the Departments by delaying supplies, or break up the Empire by refusing the means of enforcing discipline, or alter the whole law by allowing all renewable statutes to lapse together. Even as it is, the absorption of time by plans for delaying business prevents not only legislation, which Conservatives may think bearable, but the solid discussion of any subject whatever upon -which there is division of opinion. Lord Randolph Churchill and his English and Irish associates are as fatal to popular control of finance as to rapid action in Irish affairs, to national cormrrent on Lord Granville's conduct as to reform in the government of counties. There is paralysis not only in politics, but in purely useful Departments, like the Board of Trade or the Post Office. Obstruction in the last Session cost not only Mr. Gladstone his peace of mind, which the Conservatives wish to destroy, but the trading classes some twenty millions sterling, and cost the whole people whatever they have lost by every depart- mental improvement perforce laid aside ; and the loss is nothing to that which the continued paralysis of the Governing Com- mittee of the country will hereafter entail. To adhere to coarse illustrations, there are competent experts who believe that Mr. Fawcett's Parcel Post, which it is impossible to discuss without a closure, might add ten per cent, to the movement of in- ternal traffic. No -people like the English, which, with few ideas, has rough political sense and a passion for efficiency, will tolerate this state of affairs ; and in no long time—we mean within a Session or two—we shall see that phe- nomenon, a deep, angry disgust with the constitution ef the governing power, which in England has always preceded vital changes. These changes are certain not to be either in the direction of royal or of aristocratic power. There will be an irresistible demand for one of two things,—either a sweeping reform in the duration of Parliaments, which would send every Member to his constituents every year, and so make obstruction a sharply punishable offence ; or for a new and effective method of transacting business, which can only take one line. Whenever the English people are weary of delay and detail, they always take the same course,—they give up their own control over details, hand them over to "the Privy Council," that is, the Cabinet, the Department involved, or some recognised body, and reserve to themselves nothing but an ultimate veto. They do this openly as regards educa- tion, and judicial procedure, now entrusted to the Council of Judges, and as regards Railway Control, now surrendered to a Commission ; they do it tacitly in all matters of detailed finance,

in which the Treasury is supreme to a degree hardly realised ;- and they do it in all matters of direct Naval administration. When they believe the House of Commons powerless, their instinct will be not to allow of powerlessness, but to reverse the system, to allow the Cabinet to prepare and pass its own orders and laws, and leave the House of Commons only the power of veto and amendment. Obstruction cannot force a veto, or carry an amendment. We say nothing of the merits of either change, though we fear the adoption of the first, the recourse to Annual Parliaments, which is the plebiscite in disguise, and believe Democracy will some day, somewhere, probably in France, yet try the second, but only ask if Conservatives wish for any such change. Do they desire annual Parliaments, a silent House of Lords, and the Presidential system, with an ornamental Throne ? for those are the innovations towards which they are hurrying, when they refuse in advance, without listening to the Government proposals, temperately to discuss the Closure. They fancy they are only wearing out the Gladstone Period— which, as our children will see, is a Conservative period.— when they are wearing out the patience of the people with the institutions which shelter the things Conservatives love,—slow movement, restrained .popular action, and the social hierarchy of inequalities. Their bulwark is the House of Commons as at present constituted, and they are making that House contemptible.

We shall bo told by the serious Conservatives, the men who, like Mr. Gibson, and as far as intentions go, Sir Stafford Northcote, represent that ancient and durable party, and not a pinchbeck Imperialism, that even admitting the danger, a. remedy can be found in the "personal punishment of Obstruc- tires ;" but let them consider that a little. Take the Mem- bers for Ireland, first. The great majority of those Members probably do not desfre to degrade Parliament, or even to embarrass its ordinary work ; but a band, probably thirty in number, avowedly do. Suppose those thirty silenced, or even expelled, do the Conservatives believe that the remaining Irish Members, with their seats to keep, could do anything but make common cause with their brethren on that one ground, and repeat their offence, and dare the House of Commons to expel the Representatives of a nation ? Are the Conservatives, in the interest of ordered progress and the continuity of the national life, prepare& to disfranchise Ireland ; or if they are, will they have accomplished their task ? Will they also expel the "Wood- stocks," and all who will side with them, on the ground of "liberty," and all who will envy their easily-pur- chased notoriety, and all who see at last how to defend a hopelessly beaten cause ? Did it never occur to the Con- servatives that Obstruction is the precise weapon which a knot of extreme Democrats, conscious of strength outside the House, would be apt to choose ; or that the position of Parliament, faced by such men in such a way, would be almost unendurable. Suppose five men like Mr. Bradlaugh, with his tenacity and hold upon a certain class, to lock the machine until all Permanent Pensions were abolished. As Conserva- tives know, that is a subject upon which, among some rough classes, reason seems suspended. They think them- selves, as an Association in the North unanimously voted the other day, directly robbed by grants most of which, being, as they are, property, Parliament could not disallow without direct confiscation. Would the Conservatives risk the expulsion of those five, and so produce either disorders to which the Wilkes riots were trifles, or a necessity for patrol-. ling the capital with military force ? The notion that Obstruc- tion is a device of the "Irish," or a "fad" of a few hot- headed lads of position, has no solid foundation whatever. Obstruction is the weapon of discredited or disliked minori- ties, which social pressure has hitherto prevented them from using, but which, as government by deferences is dying out, they can hereafter use with ever-increasing freedom. For the moment, almost accidentally, it is directed against Liberals ; but it is against Conservatives that it is the natural weapon. They wish for order, decency, social defer- ence, as well as for that progress through accustomed methods to customary ends, to all of which a House of Commons com- monly weak and fitfully despotic must ultimately be 'fatal. If they only knew their own interest, they would regard the pre- sent unregulated Closure with horror, and welcome the regular proposals of the adversaries whom on this point they misjudge, as an unexpected protection. Do they seriously think, to adopt a phrase from a country which they closely watch, that the methods of Intransigeants will ever benefit Conservatives?