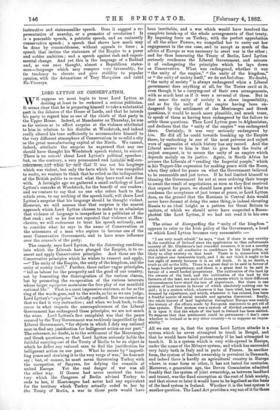 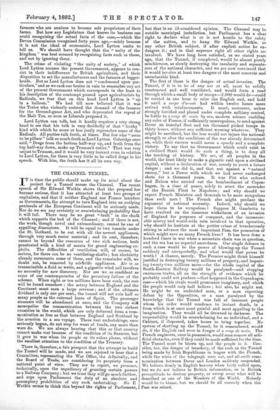 WE suppose we must begin to treat Lord Lytton as desiring at least to be reckoned a serious politician. It seems clear that he is preparing himself to take a substantial part in the debates of the House of Lords, and that he intends his party to regard him as one of the chiefs of that party in the Upper House. Indeed, at Manchester on Thursday, he was so far serious as to affect surprise at the violence attributed to him in relation to his diatribe at Woodstock, and indeed really altered his tone sufficiently to accommodate himself to the very different atmosphere of Conservatism in so solid a city as the great manufacturing capital of the North. We cannot, indeed, attribute the surprise he expressed that any one should have thought his Woodstock speech violent, to naivete. -There is no naïveté about Lord Lytton's political speeches ; but, on the contrary, a very pronounced and .iiriable"el-con- .ineu LL.- :mid-. -1=r-ft was not his Jan 0- which was violent, but only the facts which he was compelled to recite, we venture to think that he relied on the indisposition of the British public to re-read what they have read and done with. A fortnight ago we gathered a small anthology of Lord Lytton's remarks at Woodstock, for the benefit of our readers ; and we venture to say that no one who refers back to that article even, to say nothing of the speech itself, will share Lord Lytton's surprise that his language should be thought violent. However' we will assume that that surprise is the nearest approach which Lord Lytton chooses to make to an admission that violence of language is inexpedient in a politician of the first rank ; and as he has not repeated that violence at Man- chester, we will endeavour te treat his speech seriously, and to consider what he says in the name of Conservatism as the utterances of a man who aspires to become one of the next Conservative Government, and to have some influence over the counsels of the party.

The remedy, says Lord Lytton, for the distressing condition into which the Liberals have plunged the Empire, is to re- assert and apply Conservative principles. And these are the Conservative principles which he wishes to reassert and apply, —" The unity of the Empire, the unity of the kingdom, and the unity of society itself." Further, these rather vague principles, -1 bid us labour for the prosperity and the good of our country, not by fomenting the disintegration of the various classes, but by promoting the co-operation of the various interests whose larger equipoise maintains the free play of our manifold national life." That is a most impressive sentence, so far as the ring of the words goes, and to the words so far as we can judge, Lord Lytton's " equipoise " is chiefly confined. But we cannot say that we find it very instructive ; and when we look back, to dis- cover in what respects the unscrupulousness of the Liberal Government has endangered these principles, we are not much the wiser. Lord Lytton's first complaint was that the peace secured by the Tory Government was recklessly imperilled by the Liberal Government, "for objects in which I defy any rational man to find any justification for belligerent action on our part." The reference, no doubt, is to the settlement of the Montenegro and Greek questions, so that Lord Lytton seriously holds the faithful carrying-out of the Treaty of Berlin to be an object in which he defies any rational man to find the justification for belligerent action on our part. What he means by "imperil- ling peace and straining it to the very verge of war," he does not say ; but, of course, he must mean threatening Turkey with the occupation of Smyrna, for defying the counsels of united Europe. Yet the real danger of war was all the other way. If Greece had never received the terri- tory which the Congress of Berlin advised Turkey to cede to her, if Montenegro had never had any equivalent for the territory which Turkey actually ceded to her by the Treaty of Berlin, a war in those parts would have

been inevitable, and a war which would have involved the complete break-up of the whole arrangements of that treaty. By imposing force on Turkey, with the perfect approbation of all the other Powers, we compelled her to carry out her engagement in the one case, and to accept as much of the advice of Europe as was necessary to avert war in the other ; and for thus honouring the Treaty of Berlin, Lord Lytton seriously condemns the Liberal Government, and accuses it of endangering the principles which he lays down as Conservative. What was endangered, whether it was "the unity of the empire," "the unity of the kingdom," or "the unity of society itself," we do not feel clear. No doubt, "the unity of society" is always endangered when a Liberal government does anything at all, for the Tories cavil at it, even though it be a carrying-out of their own arrangements, with as much heat as if it were a reversal of them. But in that sense the unity of society is a sheer impossibility, and as for the unity of the empire having been en- dangered by the settlement of the Montenegro and Greek questions, it would be much more plausible, and much truer, to speak of them as having been endangered by the failure to settle these questions. Then Lord Lytton goes to Afghanistan, and declares that the "unity of the empire" was endangered

there. Certainly, it was very seriously endangered by Mm. He did all he could towards breaking up the Empire there, by embarking in one of the most perverse and unjust wars of aggression of which history has any record. And the Liberal answer to him is that to give back the fruits of unjust conquest, is to secure the unity of an empire which depends mainly on its justice. Again, in South Africa he accuses the Liberals of "rending the Imperial purple," which -is_bis Tupper-like expression for making peace with the Boers, when they_aaked for peace -on what the Government believed to be reasonable and just terms. If he had limited himself to blaming the Government for not at once ordering their troops to await the result of negotiations, so soon as they first received that request for peace, we should have gone with him. But to condemn the acceptance of just terms of peace, as Lord Lytton does, on the ground that the Russians in Central Asia would never have dreamt of doing the same thing, is indeed elevating Russia to an ideal height as a pattern for Great Britain to imitate, of which we should never have suspected a Russo- phobist like Lord Lytton, if we had not read it in his own words.

The crime of disregarding the "unity of the kingdom" appears to refer to the Irish policy of the Government, a head on which Lord Lytton becomes very eeonomistic :—

"I am very much afraid," he says, "that if there is any novelty in the condition of Ireland since the application to that unfortunate country of Mr. Gladstone's last remedial measure, it is not a novelty which will be at all conducive to confidence in his Irish policy, or likely to allay anxiety on that head. There is in connection with this subject one inexorable truth, and I do not think it ought to be lost sight of merely because it is an old truth. It is, no doubt, a truth as old as the hills. There is a great deal to be said in favour of a large landed proprietary, and there is a great deal to be said in favour of a small landed proprietary. The cultivation of the land by the owners of the land, and the cultivation of the land by the farmers of the land, are each of them systems which in their different circumstances have stood the test of experience. But there is one system of land tenure in favour of which absolutely nothing can be said ; it is a system which, wherever it has been tried, has been con- demned by experience, and which, wherever it has existed, has been a fruitful source of social trouble and agrarian discontent. Really, the whole history of land legislation throughout Europe was mainly the history of the efforts made by European statesmen to get rid of that system. That system was a system of divided ownership, and it is upon it that the whole of the land in-Ireland has been settled. To suppose that that settlement could be permanent—I don't care whether in Ireland or in any other country—is to suppose an impos- sibility."

All we can say is, that the system Lord Lytton attacks is a system which he never attempted to touch in Bengal, and that he would have failed portentously if he had attempted to touch it. It is a system which is very wide-spread in Europe, under the name of the Metayer system, and which has succeeded very fairly both in Italy and in parts of France. In another form, the system of limited ownership is prevalent in Denmark, and indeed there is hardly an agricultural country in Europe where, in some form or other, it has not lasted for centuries. Moreover, a generation ago, the Devon Commission admitted frankly that the system of joint ownership, as between landlord and tenant, was the fixed conception at the root of Irish society, and that sOoner or later it would have to be legalised as the basis of the land system in Ireland. Whether it is the best system is another question. The Land Act provides a way out of it for those

farmers who are anxious to become sole proprietors of their farms. But how any Legislature that knows its business can avoid recognising the actual facts of the case,—which the Devon Commission recognised forty years ago,—solely because it is not the ideal of economists, Lord Lytton omits to tell us. We should have thought that the "unity of the kingdom" was best secured by recognising facts such as these, and not by ignoring them.

The crime of violating "the unity of society," of which Lord Lytton accuses the present Government, appears to con- sist in their indifference to British agriculture, and their disposition to set the manufacturers and the farmers at logger- heads. But as Lord Lytton does not "condescend upon par- ticulars," and as we rack our brains in vain to remember any act of the present Government which corresponds in the least to his description of the contempt poured upon agriculturists by Radicals, we fear that on this head Lord Lytton is "up in a balloon." We had till now believed that it was the Tories who violently resisted the demand of the farmers for the Ground-game Act, and who deprecated the repeal of the Malt Tax, so soon as Liberals proposed it.

Lord Lytton can talk, but it hardly requires a very strong bead to see that his talk is very decidedly of that " frothy " kind with which he more or less justly reproaches some of the Radicals. All parties talk froth, at times. But few who "seem to be pillars" talk so much froth as Lord Lytton. Coleridge once said, "Dregs from the bottom half-way up, and froth from the top half-way down, make up Truman's entire." That was very unjust to Truman, and it would be very inexact even in relation to Lord Lytton, for there is very little to be called dregs in his speech. With him, the froth has it all its own way.